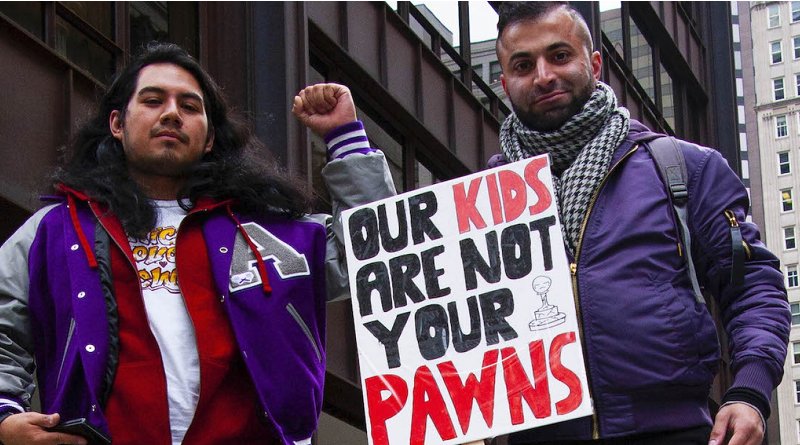 Two striking Chicago teachers hold a sign stating, "Our kids are not your pawns." Photo credit: Charles Edward Miller. This image has been cropped and modified for size. CC BY-SA 2.0.

The Chicago Public School system’s 361,314 registered students are starting their tenth day at home this morning, as their teachers union strikes for its fourteenth cumulative day. Elizabeth Warren and Bernie Sanders have publicly supported the 32,000 teachers and school staff (represented by the Chicago Teachers Union and SEIU, respectively) on the picket line – but there are five reasons people of faith should not join them.

CPS teachers are striking for higher pay, but their union’s demands include reducing average class size (from its current level of 25.2 students), a shorter school day, a “moratorium on the expansion of charter schools,” an “affordable housing” program for the school district to either build low-cost housing for teachers or finance a portion of their down payment on a home, declaring schools an immigration sanctuary area, adopting a “culturally relevant curriculum,” and hiring a “restorative justice coordinator in every school.” One of the strike’s defenders, the socialist magazine In These Times, argues CTU is “bargaining for the common good.”

Mayor Lori Lightfoot’s generous offer would cap class size at a slightly higher level. Her 16 percent raise assures “the average teacher’s salary will rise to nearly $100,000” a year, with a less-than-one-percent increase in health insurance costs. It includes an “ironclad anti-privatization guarantee” that all newly hired support staff will be unionized. It bans ICE agents from school grounds and bars school officials from cooperating with ICE without a court order. And it offers “a net-zero increase” in the number of charter schools, although it would allow enrollment to increase by 101 percent.

The updated tentative agreement proposed Tuesday evening spends an additional $15 million over the $485 million already on offer. But she says the union added an “eleventh hour” demand that the school board be elected instead of appointed by the mayor, and that the mayor support statewide legislation that would increase the number of issues over which the union can strike. It also remains steadfast in its demand that teachers have 45 minutes paid “preparation time,” shortening the amount of instruction children would get by half an hour each day.

In effect, the Chicago Teachers Union is prolonging this strike for the right to teach less now and strike more often in the future.

As of this writing, the two sides remain incapable of reaching an agreement. A school strike is not a moral reaction for the following reasons:

Teachers strikes deprive students of an education. At a minimum, a strike denies children the chance for academic improvement, but there is some evidence that strikes inflict long-term harm. Researchers at Harvard found that “each 10 days of teacher absences reduce students’ mathematics achievement by 3.3 percent of a standard deviation.” A 2011 study of Canadian students concluded teachers’ strikes have a “statistically significant” and “negative” impact on test scores in grades 5 and 6. (Thankfully, local churches and civic institutions have spontaneously rushed to plug the educational, nutritional, and childcare vacuum created by the public schools’ closure.) Furthermore, reducing instruction time by another half hour would represent a step backward for a school district that “once had the shortest school day in the country,” according to the Chicago Sun-Times.

2. The teachers union would lock poor children out of high-performing charter schools.

It is unconscionable for a teachers union to deny children access to a superior education in order to protect budgeting and “turf.” That is largely what is taking place. Since state education funding follows the student, tax revenue flows from Chicago’s underperforming, traditional public schools to innovative, better-performing, and lower-cost charter schools. Students who attend Chicago’s charter schools are seven percent more likely to graduate and 11 percent more likely to enroll in college, a Rand study found.

The latest labor standoff began when the new state funding formula allowed the school district to receive an additional $1 billion in funding annually. Mayor Lightfoot has already spent $700 million to plug a gaping hole in the Chicago Teachers Pension Fund, and the school will spend another $700 million to finance its $8.4 billion debt. The union’s demands would cost an additional $2.4 billion annually, Lightfoot says. Systemic issues already threaten the district’s solvency: The average teacher recuperates every dollar he or she paid into the pension system within five months of retirement, according to the Illinois Policy Institute. This debt, accrued through previous union-negotiated contracts, will only increase under the new proposal, leaving a significant burden for the students Chicago teachers are (not currently) teaching.

4. Smaller class sizes are a panacea, not a solution.

How class size impacts learning, and the reasons behind it, remain hotly contested. Reducing class size has “a very small” impact on reading scores and “statistically non-significant” effect on mathematics, according to a meta-analysis on the issue conducted by the Oslo-based Campbell Collaboration. Even advocates of smaller class size admit it guarantees nothing. “Class-size reduction alone will only get fewer children in a class,” said Elizbeth Graue of the University of Wisconsin-Madison. “It doesn’t translate directly to a change in achievement.” But hiring new teachers, much less building adequate classroom space for them, is costly – especially in the third-largest school district in the United States, with 500 schools. With education dollars at a premium, it is wrong to go deep into debt for an uncertain outcome.

President Franklin D. Roosevelt, who signed the Perkins Act guaranteeing the right to collective bargaining, opposed the existence of public sector unions. Unions represent the interests of their members at the expense of their employer, but government workers would organize at the expense of U.S. citizens. “The employer is the whole people, who speak by means of laws enacted by their representatives in Congress,” he wrote.

However, FDR thought strikes should not be an option for any government official. “Particularly, I want to emphasize my conviction that militant tactics have no place in the functions of any organization of Government employees,” he wrote in a 1937 letter to a union official. “Such action, looking toward the paralysis of Government by those who have sworn to support it, is unthinkable and intolerable.”

Germany’s Federal Constitutional Court showed a similar understanding when it ruled last year that “a right to strike for civil sector workers … would undermine [the] fundamental principles” of civil service.

The Catechism of the Catholic Church teaches that a strike “becomes morally unacceptable” when it is “contrary to the common good.” Under that criteria, the latest Chicago teachers’ strike is immoral.