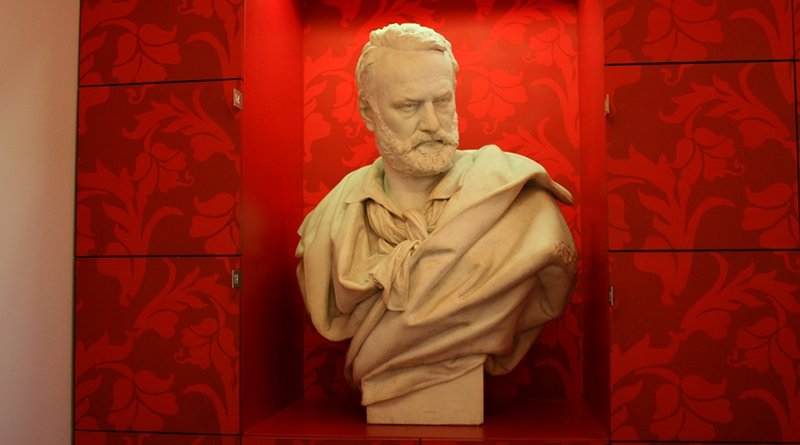 Both China’s leadership and Hong Kong protesters embrace Victor Hugo’s writings and themes of the poor resisting the powerful rich.

By Amy Hawkins and Jeffrey Wasserstrom*

Despite worldwide popularity for a Frenchman who died in the late 1800s, Victor Hugo remains a mystery. His novels and the films they inspired are beloved from Hiroshima to Hanoi. When South Korean demonstrators toppled a corrupt president several years ago, one song their marches featured was “Do You Hear the People Sing?” from the musical Les Misérables. In 2019, this anthem has been among the rallying cries of Hong Kong activists. Even on the Chinese mainland, Beijing theatregoers flock to a dramatization of The Hunchback of Notre Dame while Shanghai art lovers take in a show dedicated to his “legendary life.”

Hugo’s current prominence across the People’s Republic of China is particularly intriguing. How can a man linked to a song that has been key to anti-Beijing struggles in Hong Kong since the 2014 Umbrella Movement – one removed from Chinese music-streaming platforms – simultaneously be celebrated in China’s capital, where his many fans include Xi Jinping himself? The answer lies in the multifaceted writings of Hugo spread by globalization, relaying the struggle taking place in China and Hong Kong about what it means today to be both Chinese and a citizen of the world.

For the young generation of Hong Kong protestors, the question of being “Chinese” is a moot point. Joshua Wong says that although he is “ethnically Chinese,” he identifies as a Hong Konger. “It’s hard for me to recognize myself as a Chinese citizen because I am blacklisted by the government and not allowed into the country,” says the 23-year-old high-profile activist. Even for those not blacklisted, growing up speaking Cantonese and enjoying the internet free of the Great Firewall has inserted distance from their supposed overlords in Beijing. They sometimes mine distinctively Chinese traditions, such as the Confucian adage that suggests students have a special duty to serve as the moral consciences of their communities. Protesters also look far afield for inspiration, quoting Hollywood movies (the phrase “If we burn, you will burn with us” is from the Hunger Games series) and embracing tactics from Eastern Europe (the recent Hong Kong Way handholding spectacle was an adaptation of the 1989 Baltic Way protest).

For older Hong Kongers, the relationship is more complicated. Living for decades under distant British rule, many see themselves as first and foremost Chinese, even if they dislike the Communist Party. Hong Kong welcomed political refugees after 1989’s June 4th massacre. It is still the only place in the People’s Republic of China where mass remembrances of that event are held annually, with smaller gatherings in Macau. These vigils are seen by some, especially those older than 40, as signaling that the fight to protect Hong Kong’s freedoms is linked to struggling for a future that includes a freer China.

Beijing’s leaders do not recognize either position as legitimate. The Communist Party does not tolerate any questioning of national identity amongst those of Chinese descent living in the territories it considers sovereign, including not just Hong Kong and the former Portuguese colony of Macau but also Taiwan. In Beijing’s eyes, such Chinese people were “liberated” by Mao Zedong and his successors and they owe the party gratitude. Indeed, the seizing of Hong Kong by British forces during the 1841 Opium War ushered in China’s “century of humiliation” that the CCP vowed to end.

This makes it ironic that Hong Kong – a place of little import before the Opium War that went on to become a global financial hub – has humiliated Beijing afresh in novel ways since June. And just as the protestors have on occasion ironically directed Mao’s own slogans back at Beijing, like “a revolution is not a dinner party,” the writings of Hugo, one of the first foreign writers to be translated into Chinese before 1949 and a darling of the Communist Party throughout much of the last 70 years, are used in varying ways. Both the party and its opponents in Hong Kong see their revolutionary spirits reflected in Hugo’s work, while strident nationalists on the mainland laud him as a western defender of China’s cultural heritage, due to his famous letter castigating France for taking part in the 1860 sacking of Beijing. These competing perspectives reveal the messy nature of the spread of global ideas.

Hugo’s enduring and complex place in Chinese imaginations became clear when Notre Dame burned earlier this year. Some mainland residents wept, as their thoughts turned to the iconic structure in The Hunchback of Notre Dame, a book beloved in China long before the play opened in Beijing. But others thought, with a touch of schadenfreude, of Hugo’s famous letter in which he lambasted the destruction of China’s own cultural icon, the Old Summer Palace, at the end of the Second Opium War (1858-1860). After English and French forces burnt Beijing’s imperial dwelling to the ground to avenge violent acts against Westerners by soldiers of the Qing Dynasty (1644-1912), Hugo wrote: “All the treasures of all our cathedrals put together could not equal this formidable and splendid museum of the Orient.” He continued: “We Europeans are the civilized ones, and for us the Chinese are the barbarians. This is what civilization has done to barbarism.” This letter has been taught in high schools across China, and there have even been rumors of Chinese state-sponsored art heists across Europe to reclaim the looted treasures from western galleries. Perhaps Hugo would approve.

Hugo’s championing of the striving poor against inheritors of power and riches as well as China against the West makes him an easy writer for today’s Beijing leaders to love and, in Xi’s case, to quote, even at a time when their families hold vast wealth. The Chinese extol Hugo’s celebration of the revolutionary spirit and workers despite the mainland having become a place where young people channeling his ideals – and those of Karl Marx, for that matter – are met with prison, oppression and harassment. This is demonstrated by the disappearance of Peking University students who campaigned to support striking factory workers in Shenzhen.

Hugo’s diverse meanings in China might seem curious to western observers, but we do the same with China’s most famous figures, such as Confucius. To Voltaire and other Enlightenment thinkers, the Chinese sage’s ideas were in step with their own intellectual movement: rationalism that favored rule by moral people. But by the late 20th century, Samuel Huntington’s Clash of Civilizations – a work with an overly simplistic and flawed thesis – has gained new purchase since being embraced by influential figures in the Trump administration, and “Asian values,” such as Confucius’s emphasis on filial piety and stability at the expense of autonomy, were presented as completely inimical to democratic Enlightenment ideas.

If Hugo were alive today, what would he make of the country he so admired in the late 19th century? Would he support the Chinese government’s efforts to repatriate artifacts looted from the Old Summer Palace? Or would his sympathies lie with the outraged Hong Kong youth who reject what Beijing has to offer? Les Misérables celebrates those who challenge a corrupt society that exploits the poor. The Chinese Communist Party claims they seized power to do just that, but the country leads the world in purchases of luxury goods and prohibits laborers to form independent unions to fight for better pay and working conditions.

Wherever his sympathies lay, Hugo’s ghost would probably shake his head in befuddlement. He would be no less baffled than the ghost of Confucius might be if told his views were viewed by some in the West as in step with and, by others, at odds with the Enlightenment – or that the Communist Party whose leaders once reviled him now regard him as a national saint. Onlookers might do well to remember what Confucius’s famous follower Mencius stressed long ago, using wording that brings the Les Misérables anthem to mind – rulers may rule via the support of Heaven, but Heaven “hears with the ears” and “sees with the eyes” of the people.

*Amy Hawkins is a freelance journalist based in Beijing. Her writings on topics ranging from cultural trends to technology have appeared in newspapers such as the Guardian and the Financial Times, as well as other general interest publications, including Foreign Policy, the Times Literary Supplement, the Atlantic, AEON and Wired.

*Jeffrey Wasserstrom in Chancellor’s Professor of History at the University of California, Irvine. He has published widely on Chinese history and world history, both in academic and general interest venues, and is the author, most recently, of Vigil: Hong Kong on the Brink, a short book that will be published in February by Columbia Global Reports.