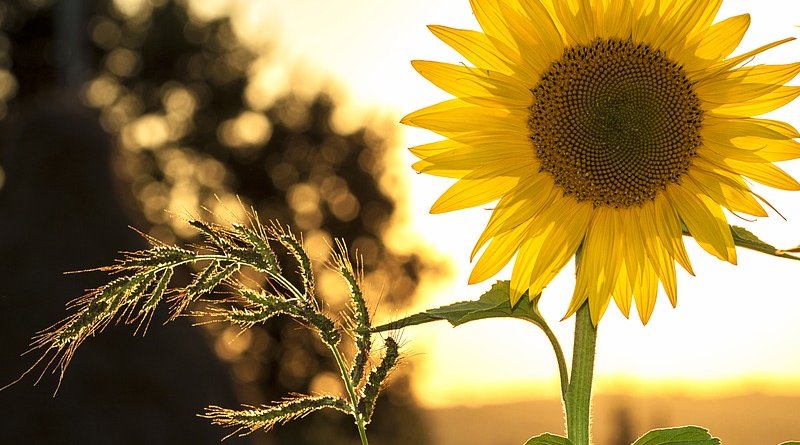 Ever humble, worshiping the sun, the wild sunflower Tithonia diversifolia, or Mexican sunflower, its genus Helianthus, rooted in two Greek words — “helios” meaning sun and “anthos” meaning flower. has the tendency to reposition itself to face the sun.

And talk to listeners.

But are we listening?

We may well do so before global warming, like the Greek myth where Apollo turned his lover Clytie into a flower, to face forever the sun, will reckon with us with solar heat .

The sunflower is not quite of this earth. Its yellow crowned head sits atop its stalk like a green broomstick. Its seeds, arranged in a logarithmic spiral, are produced by tiny flowers called disc florets that emerge from the center of its head and radiate outward. But aside from being a biological marvel, the sunflower is also often in the scientific spotlight.

The characteristic of the flower in facing the sun, fascinates us more where young flowerheads and generally stops once the flower starts to bloom (mature sunflowers generally face east) called heliotropism.

In agriculture, the wild sunflower, demonstrates how to treat crop vulnerablity to direct effect of heat stress at anthesis and drought during growing cycle, both factors resulting in severe yield loss, oil content decrease, and fatty acid alterations.

They determined adaptations through breeding (earliness, stress tolerance), crop management (planting dates), and shifting of growing areas could be developed, assessed and combined to partly cope with these negative impacts with the help of sunflowers.

New cultivation opportunities could be expected where sunflower prove to grow and where it could usefully contribute to diversify cereal-based cropping systems. In addition, sunflower crop could participate to the mitigation solution as a low greenhouse gas emitter compared to cereals..

Wild sunflower crop models can be be used to account for emerging environmental factors in order to reduce the uncertainties in crop yields. The future of crop production to their potential adaptation to climate change and also their competitiveness and attractiveness for food and energy.

In another development, An international consortium of 59 researchers who set their sights on the laborious task of sequencing and assembling the sunflower’s genome published their results in a 2017 study in Nature. This achievement will provide a genetic basis for understanding how the sunflower responds and adapts to different environments. With this, crops may be tailored to such traits.

With its genome assembled, scientists are hopeful for the next phase of the sunflower’s scientific career: as a “model crop” for studying climate adaptability in plants. This task is more complex and urgent now than ever. Climate change, according to a paper in the Annals of Botany, “will influence all aspects of plant biology over the coming decades,” posing a threat to crops and wild plants alike.

Part of what makes the sunflower useful for studying climate change is the plant’s natural resilience. Already well-equipped to withstand drought, high salinity, vastly variable ecosystems, and requiring little fertilizer, the sunflower is one of nature’s finest apocalypse preppers.

Admiring scientists are now hoping to maximize these capacities. Despite the sunflower’s queenly front, it can make a home out of anything, such as salt marshes, sand dunes, and the dry desert floor.

Owing to its diversity and immense adaptability, Tithonia diversifolia (Asteraceae), is native to Central America. but has spread in more than 70 countries across Asia, Africa and Australia. In Africa, this species is known to disturb native crops and plant communities, but its negative impacts remain underestimated. Moreover, its potential invasion risk has not been investigated so far.

A fundamental aspect in the identification and prediction of habitats susceptible to biological invasions lies in the ability of an organism to conserve or change its ecological niche as part of the invasion process. .

There are around 50 species of sunflower. Some have multiple, smaller flower heads (technically named inflorescences), some appear more bushy, some closer to the ground.

Green biomass of tithonia has been recognized as an effective source of nutrients for lowland rice im the Cordillera region of the Philippines and among some indigenous tribes in Asia and more recently for maize (Zea mays) and vegetables in eastern and southern Africa . Green leaf biomass of tithonia is high in nutrients, averaging about 3.5% N, 0.37% P and 4.1% K on a dry matter basis. Tithonia biomass decomposes rapidly after application to soil, and incorporated biomass can be an effective source of N, P and K for crops. In some cases, maize yields were even higher with incorporation of tithonia biomass than with commercial mineral fertilizer at equivalent rates of N, P and K.

Because of high labor requirements for cutting and carrying the biomass to fields, the use of tithonia biomass as a nutrient source is more profitable with high-value crops such as vegetables than with relatively low-valued maize. The transfer of tithonia biomass to fields constitutes the redistribution of nutrients within the landscape rather than a net input of nutrients.

External inputs of nutrients would eventually be required to sustain production of tithonia when biomass is continually cut and transferred to agricultural land.

The wild sunflower, symbolic of vitality, intelligence, and happiness may yet offer us hope in our endless struggle to reverse climate change.