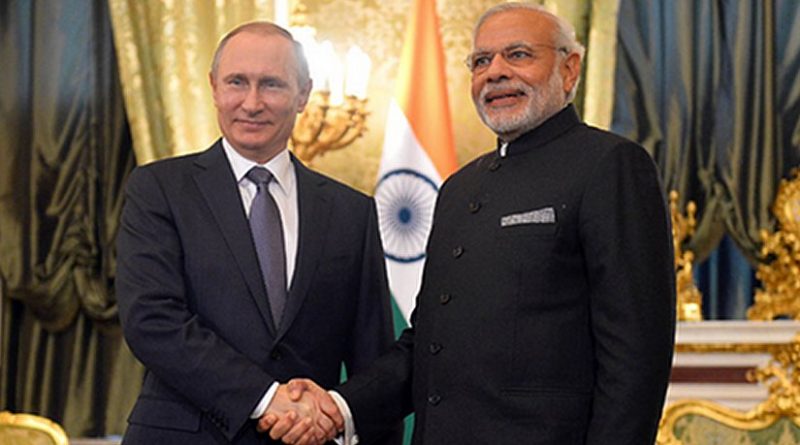 Indian Prime Minister Narendra Modi visited Moscow December 23-24 to attend the 16th annual summit meeting with President Vladimir Putin. This was his first bilateral state visit to the Russian capital, but his fourth interaction with him. When compared to Putin’s schedule in New Delhi for the 15th summit last year, Modi’s schedule in Russia was rather plate-full.

Relations between India and Russia have evolved over a period of seven decades to reach the current levels of “special and privileged strategic partnership’’. For four decades (1950-90), India, despite its strong credentials as a leading non-aligned country, was viewed as an ally of erstwhile USSR. India’s dependence on Soviet Union for political, diplomatic and moral support as well as in defence, nuclear energy and heavy industry was near total.

The disintegration of the Soviet Union in 1991 led to a pause in the growth of relations between the two countries, with this trend lasting for almost a decade. The trend was reversed by President Vladimir Putin whose landmark visit to India in 2000 led to elevation of relations to ‘strategic partnership’. It also institutionalized the annual bilateral Summit level meetings between the leaders of the two countries-a practice followed uninterruptedly since then.

Modi’s visit to Moscow assumed significance as it came in the backdrop of growing perceptions that following the change of Government in New Delhi in May 2014, India began to gradually drift away from its “time-tested friend” Russia in its bid to be closer to the West (led by the US). Russia thought it had valid reasons to feel insecure or at least be unsure about its long-standing strong ties with India.

Russia was in particular upset over India’s decision to diversify its sources of defence imports- an area where initially the Soviet Union and later Russia had monopolized for decades, but where it is now losing out to other international players such as USA, Israel, and France etc.

In the wake of falling oil prices and sanctions from the West, Russia desperately needs to prop up its defence exports to sustain its military-industrial complex-an important stronghold of its economy. It can therefore ill-afford to lose a reliable buyer such as India. From India’s perspective, Russia’s accelerated engagement with China, in particular equipping it with modern air defence system S-400, and its decision to lift self-imposed arms sale embargo on Pakistan were becoming a source of concern, even if those moves were to be treated as part of Russia’s response to shifting geo-political alignments in Asia and pressure of western sanctions.

One of the unstated priorities for PM Modi during the visit was therefore to set the record straight and restore mutual trust and confidence. Besides carrying a long wish list for defence purchases, he publically assured his counterpart: ‘I have always had great respect and appreciation of our strategic partnership. It has been a source of strength and success for India in defence development and diplomacy’.

He went on to describe President Putin as the ‘architect of the India-Russia strategic partnership’, adding that “I see Russia as a significant partner in India’s economic transformation and in shaping a balanced, stable, inclusive and multi-polar world”. In the given context, these words were more than rhetoric and carried substance and message, reflected eventually, in their Joint Statement, which read: the two sides “reaffirmed the unique character of Russia-India relations based on time-tested and deep mutual trust and friendship between the two nations”.

In all, sixteen bilateral agreements MoUs, covering a wide range of areas, were signed during the visit. Significantly, the agreements in defence and nuclear energy sectors have been fine-tuned to fit into PM Modi’s “Make in India” concept. The agreement on cooperation in Helicopter Engineering for instance envisages the manufacturing of Kamov 226 Helicopters in India. Similarly it was agreed to incorporate Indian manufacturing content in twelve Russian Nuclear Reactors to be built in India over a period of time. Intriguingly, despite widespread belief, there was no announcement made during the visit on India’s intention to purchase from Russia S-400 Triumf air defence system, which would make India the only country in Asia, other than China, to possess this modern equipment. No reference was made also to India’s reported intentions to procure nuclear submarines and stealth frigates except that PM Modi said “we have made progress on a number of other defence proposals”.

The important political takeaways from the visit include: Russia’s “strong support for India’s candidature for a permanent seat in reformed UN Security Council”; Russia’s endorsement of India’s interest in full membership for nuclear export control regimes (Nuclear Suppliers Group and WASSENAAR Arrangement) as well as Russia’s commitment to work closely with India towards India’s membership of APEC; call for “early elimination, once and for all of ‘safe havens’ of terrorists, (albeit without naming Pakistan)”; need to fight terrorism “without selectivity and double standards” (endorsement of India’s views on so-called good terrorism and bad terrorism). In an apparent deference to China’s sensitivities and presumably on Russia’s insistence there was no reference made to uninterrupted right to navigation etc. in South China Sea.

India-Russia Business Forum held during the visit acquired importance in the context of the commitment of the two countries to strengthen the economic pillar of their strategic relations and to triple the volume of trade by 2025 which currently is less than $10bn. It was attended by the CEOs of leading business groups from India and Russia and addressed by PM Modi and President Putin, reflecting the seriousness on both sides. However, both India and Russia will need to work hard to create appropriate enabling environment to push their economic relations beyond defence, energy and heavy industry.

On the whole, PM Modi’s visit can be said to have addressed the concerns of Russia and helped restore mutual trust and confidence, and understand each others’ compulsions while operating in an increasingly multi-polar world. It also provided an opportunity to pronounce the convergence of views on several issues of regional and international dimensions. The visit was also one more step forward in the direction of expansion and diversification of trade and economic links. It could be business as usual from now onwards.

*Achal Kumar Malhotra is a former Indian Ambassador and a leading expert on Russia. He can be reached at: [email protected]