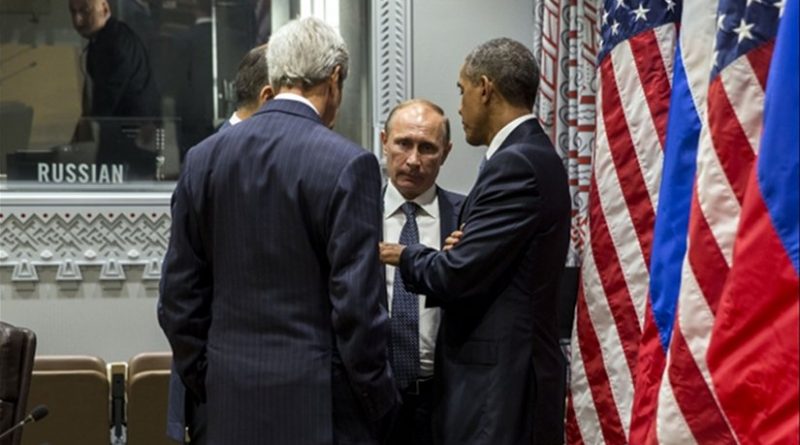 There has been much to-do in recent months and years about what have appeared to many to be Vladimir Putin’s bold, aggressive moves in the Ukraine and Syria. Some have attributed strategic insight and effectiveness to Putin, and some have deplored what they consider to be weak, ineffective responses by the leaders of the United States and Europe.

But looking only a little beneath the surface of these events, one can see Putin as attempting, somewhat ineffectively, to avoid major geostrategic losses, playing a weak hand, and lacking apparent means to avoid further loss.

Put in straightforward terms, Russia is losing effective control of the bulk of the Ukraine, one of the cradles of its existence, having a history of inclusion, or identity, going back to the 9th century CE.

Historically associated with Russia and the Ukraine is Crimea, providing Russia access to the Mediterranean Sea. Putin has physically seized this asset. He may hold it. But at substantial cost.

The Ukraine is, from the viewpoints of Western Europe and the United States, a potentially useful addition. But it has apparently not been considered a core element in their systems. They have clearly tried to preserve its freedom of action, but not escalated into a major physical confrontation with Russia.

Why, then, does it appear that the bulk of the Ukraine is moving closer to Europe, notwithstanding obvious displeasure from Russia?

A very simple explanation is that the peoples of much of the Ukraine have been able to compare the economic and political systems of Europe and Russia, and prefer those of Europe. The institutions of Europe seem to offer more persuasive promise of prosperity, civic liberties, and responsible, regular, dependable, and lawful governance.

Why, then, does Russia not make itself more attractive to the Ukrainians, in terms of potentials for prosperity, civic liberties, and responsible, regular, and lawful governance?

One view would be that Russia lacks the scale, depth, agility, and over all competitiveness of the Euro-American economic complex.

Over the long term, there would appear to be little Putin can do about that. Even if he were to institute governance and economic reforms to try better to compete, Ukraine would find more attractive European connections in a great many areas.

The second reason to be considered is that, in Russia, what appears to be an highly centralized economic system, dependent on autocratic leadership which economically and politically rewards followers and disadvantages those it finds inconvenient, is not and probably cannot be as diverse, nimble, productive, and rewarding in economic partnership with Ukrainian entities. Nor would it appear to be as politically appealing as Western models.

To overcome this handicap, Putin would appear to have to sacrifice the core of his methods of governance. One may presume he will be loath to do that. And he might not survive having done it.

Thus, Putin has been reduced to external bluff and bluster, and to justifying economic hardship to his citizenry. This is not a strong position.

In Syria, the major geostrategic asset is, again, a port on the Mediterranean Sea. Syria has been a source of sales of military and other products. But the chaos there has made it look like more of an economic sink than an economic asset. And the encroachment of radical political Islam in that area is a development potentially threatening, to some to degree, to Russia.

In response, Putin’s Russia has again rattled its swords. But it has been, thus far, forced into an awkward partnership with the United States, Europe, and other entities. And the way Russia has deployed its military assets seems repugnant to many who are actors for these partners.

At this point, whether Russia can preserve its local partner-dictator of choice, Assad, is highly uncertain.

All the above is not to say that Russia will lose all its marbles either in the Ukraine or Syria. Russia has available to it a lot of geography, major hydrocarbon assets, geographic proximity to these areas of engagement, military assets, and a talented and technically somewhat sophisticated population. One may confidently expect that there will continue to be economic exchanges with Russia, over time, in both these areas of engagement.

But to depict Putin as boldly outdueling the West would not seem accurate. He is bold. But he is up against formidable odds, with a bundle of assets noticeably less weighty, over all, than those of his competitors. And he is obviously having great difficulty in controlling the terms of engagement.

About the author:
*Jack Pearce has served as Assistant Chief of a section of the United States Justice Department Antitrust Division responsible for liaison with other Executive Branch agencies, regulatory bodies, and Congressional bodies as to actions which would impact upon competition in the US economy, Assistant General Counsel to the US Agency for International Development, and Deputy General Counsel at a White House Office of Consumer Affairs. He has conducted an antitrust oriented legal practice in Washington DC, and also served on the Boards of Directors of business and civic organizations located in the Washington area.