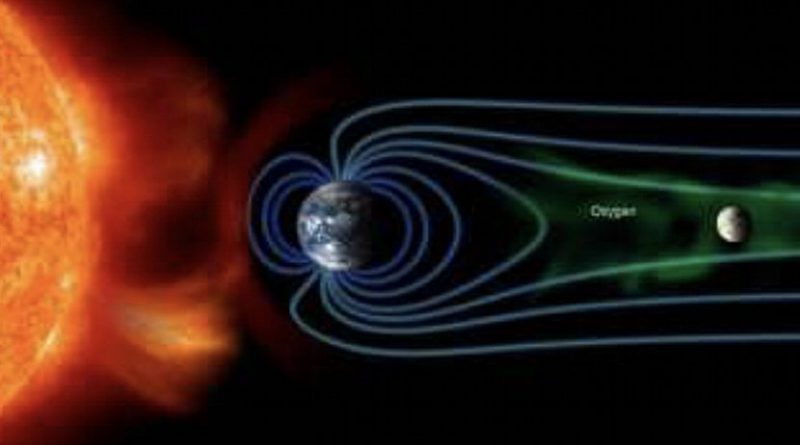 Photo by courtesy of Osaka University/NASA

When and how was the Earth formed in the vast Universe? Is the Earth unique in the Universe? These questions always arouse our curiosity. The article “Biogenic oxygen from Earth transported to the Moon by a wind of magnetospheric ions” was published in Nature Astronomy in January 2017 and ranked in the top three of the journal’s most read articles in 2017.

A joint group of researchers from the Institute of Space and Astronautical Science and Nagoya University, led by Professor TERADA Kentaro at Osaka University, by using the Magnetic field and Plasma experiment/Plasma energy Angle and Composition experiment (MAP-PACE) on SELENE (Selenological and Engineering Explorer), known in Japan as the spacecraft “Kaguya,” succeeded in observing that oxygen from the gravisphere of Earth was transported to the Moon 380,000 km away by solar activity.

This group examined plasma data of MAP-PACE 100 km above the Moon’s surface and discovered that high-energy oxygen ions (O+) appeared only when the Moon and Kaguya crossed the plasma sheet.

It had been known that oxygen ions flowed out from the polar regions into space; however, this group succeeded in observing that they were transported as “Earth wind” to the surface of the Moon, a world first.

O+ ions detected by this group had a high energy of 1-10 keV. These O+ ions can be implanted into a depth of tens of nanometers of a metal particle. This is a very important finding in understanding the complicated isotopic composition of oxygen on the lunar regolith, which has long been a mystery. Through their observation, this group demonstrated the possibility that components that lack 16O, which is a stable isotope of oxygen and is observed in the ozone layer, a region of Earth’s stratosphere, were transported to the Moon surface as “Earth wind” and implanted into a depth of tens of nanometers on the surface of lunar soils.

Oxygen, which is vital to sustaining life and makes up about 20 percent of the Earth’s atmosphere, has been produced from photosynthesis of plants during the last 2 to 3 billion years. Discoveries like the one by this group will not only encourage researchers’ spirit of seeking truth, but will also have a great impact on the views of nature and science of the general public.