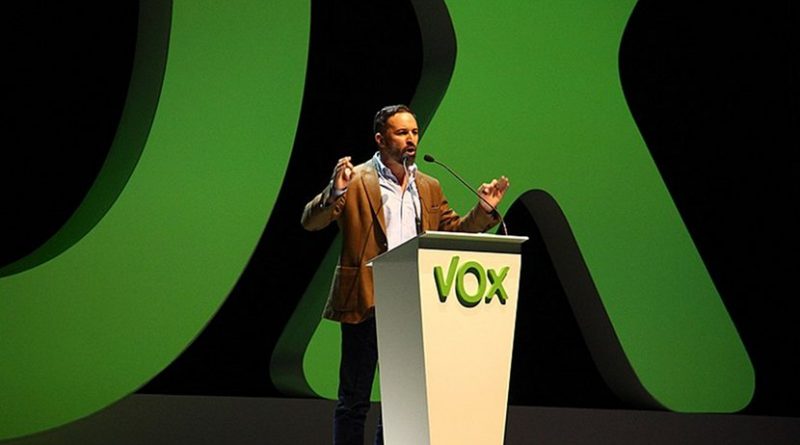 In what seems a replay of recent German and Italian elections, an openly authoritarian and racist party made major electoral gains in Spain’s most populous province, Andalusia, helping to dethrone the Socialist Party that had dominated the southern region for 36 years.

Vox, or “Voice” — a party that stands for “Spain First,” restrictions on women’s rights, ending abortion, stopping immigration, and dismantling the country’s regional governments — won almost 11 percent of the vote. The party is in negotiations to be part of a ruling right-wing coalition, while left parties are calling for an “anti-fascist front.”

It’s as if the old Spanish dictator Francisco Franco had arisen from his tomb in the “Valley of the Fallen” and was again marching on Madrid.

Actually, the results weren’t so much “stunning” — the British Independent’s headline on the election — as a case of chickens coming home to roost, and a sobering lesson for center-left and left forces in Europe.

It was the worst showing in PSOE’s history, and, while it is still the largest party in Andalucía, it will have to go into opposition.

A Collapse of the Center

On one level the Andalucian elections look like Germany, where the neo-fascist Alternative for Germany (AfG) took 94 seats in the Bundestag. And they resemble Italy, where the right-wing, xenophobic Northern League is sharing power with the center-right Five Star Movement.

There are certainly parallels to both countries, but there are also major differences that are uniquely Spanish.

What’s similar is the anger at the conventional center-right and center-left parties that have enforced a decade of misery on their populations. Center-left parties like the Democratic Party in Italy and the Social Democratic Party in Germany bought into the failed strategy of neo-liberalism that called for austerity, regressive taxes, privatization of public resources, and painful cutbacks in social services as a strategy for getting out of debt.

Not only was it hard for most people to see a difference between the center-left and the center-right, many times the parties governed jointly, as they did in Germany. Andalucía’s Socialists were in an alliance with Ciudadanos.

However, the rise of parties like Vox and the AfG has less to do with a surge from the right than as a collapse of the center. The Spanish Socialists did badly, but so did the right-wing Popular Party. In Germany, both the center-right and the center-left took a beating.

In the aftermath of the Andalucian debacle, Susana Diaz, leader of the PSOE in Andalucía, called for a “firewall” against the right. But Diaz helped blow a hole in that “firewall” in the first place with politics that alienated much of the Socialists’ long-time constituency. In 2016 Diaz led a rightist coup in the PSOE that dethroned General Secretary Pedro Sanchez because he was trying to cobble together a coalition with the Leftist Podemos Party, the Basques, and Catalan separatists.

After ousting Sanchez, Diaz allowed the conservative Prime Minister Mariano Rajoy to form a government and pass an austerity budget. Making common cause with the PP was apparently too much for the SPOE’s rank and file, and they returned Sanchez to his old post seven months later. The Socialist rank and file also seems to have sat on their hands in the Andalucian election. Only 58.6 percent of the electorate turned out, and there were a considerable number of abstentions and blank ballots in traditionally Socialist strongholds.

The leftist AA took a hit as well, but that was in part due to some infighting in Podemos, and because the party didn’t mobilize significant forces on the ground. And because Podemos kept its distance from the crisis in Catalonia, it ceded the issue of separatism to the right, particularly Ciudadanos, which wrapped itself in the Spanish flag.

Podemos actually has a principled position on Catalan independence: It opposes it, but thinks the matter should be up to the Catalans. It also supports greater cultural and economic autonomy for Spain’s richest province. But when Rajoy unleashed the police on the October 2017 independence referendum, beating voters and arresting Catalan leaders, Podemos merely condemned the violence. The Socialists supported Rajoy, although they too expressed discomfort with the actions of the police.

Ciudadanos, on the other hand, enthusiastically supported the violent response, even provoking it. According to Thomas Harrington — a professor of Iberian Studies at Trinity College in Hartford, and an expert on Catalonia — Ciudadano members systematically removed yellow ribbons that Catalans had put up to protest the imprisonment of Catalan leaders.

Harrington quotes Eduardo Llorens, a prominent member of the Ciudadano-supported unionist movement: “Violent reactions by the independentists must be forced. We’ve done a good job of constructing the narrative of social division, but violent acts on their part are still needed to consolidate it. In the end they will react. It’s just a matter of our being persistent.”

Ambiguity on the progressive side left a clear field for Ciudadanos, which hammered away at the Catalan separatists. Ciudadanos ended up getting 18.3 percent of the vote, more than double what it got in the last election (though the PSOE and PP are still the two largest parties in the province).

As for Vox, it is surely disturbing that such an antediluvian party could get 10.5 percent of the vote, but it would be a mistake to think that Franco is back. In fact, he never went away. When the dictator died in 1975, the Spaniards buried the horrors of the 1936-39 civil war and the ensuing repression, rather than trying to come to terms with them: some 200,000 political dissidents executed, 500,000 exiled, and 400,000 sent to concentration camps.

Vox tapped into that section of the population that opposes the “Historical Memory Law” condemning the Franco regime, and still gathers at Valley of the Fallen or in town squares to chant fascist slogans and give the stiff-arm salute. But the party is small, around 7,000, and part of the reason it did well was because of extensive media coverage. Most the party’s votes came from PP strongholds in wealthy neighborhoods.

Following the election, thousands of people poured into the streets of Seville, Granada and Malaga to chant “fascists out.”

Certainly the European right is scary — particularly in Spain, Italy, Germany, Greece, Austria, and France. It’s absconded with some of the left’s programs, like ending austerity, a guaranteed wage, and resisting the coercive power of the European Union.

Once elected, of course, it will jettison those issues, just as the Nazis and fascists did in pre-war Germany and Italy. And removing them won’t be easy, since their only commitment to democracy is as a tool to chisel their way into power.

The center-left and the left are still formidable forces in Europe, and their programs do address the crises of unemployment, growing economic disparity, and weakening social safety nets.

But the path to success will requiring re-thinking the strategy of the past 30 years and fighting for programs like those the British Labour Party adopted under Jeremy Corbyn: rolling back the privatization of public resources, a graduated tax scale based on wealth, investments in education, health, housing, and infrastructure, raising the minimum wage, encouraging unions, and seriously tackling the existential issue of climate change.

*Foreign Policy In Focus columnist Conn Hallinan can be read at dispatchesfromtheedgeblog.wordpress.com and middleempireseries.wordpress.com.

Home » Spanish Elections Offer Another Lesson For The Left – Analysis