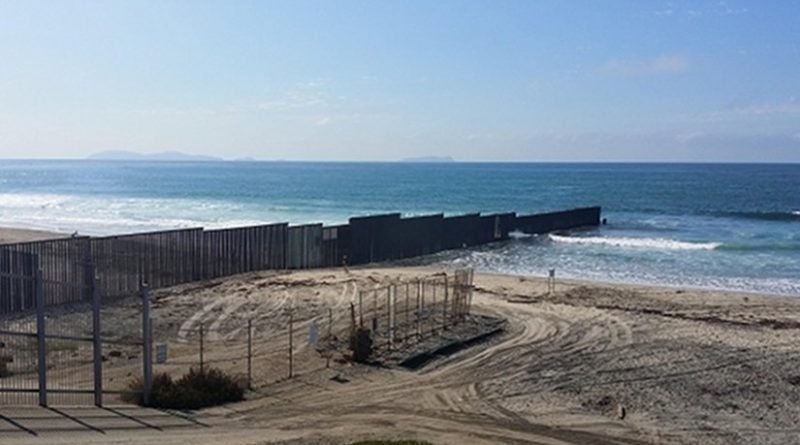 By Ken Bredemeier and Michael Bowman

U.S. President Donald Trump acknowledged Monday that not all of the barrier he wants to build along the Mexican border would be a concrete wall he has long called for.

“An all concrete Wall was NEVER ABANDONED, as has been reported by the media,” Trump contended in a Twitter remark. He was disputing John Kelly, his outgoing White House chief of staff, who said in an interview over the weekend that the Trump administration discarded the idea of a “solid concrete wall” early in Trump’s two-year tenure as president.

But Trump conceded, “Some areas will be all concrete but the experts at Border Patrol prefer a Wall that is see through (thereby making it possible to see what is happening on both sides). Makes sense to me!”

Trump won the cheers of his most ardent loyalists in his successful 2016 presidential campaign with his call for a solid concrete wall along the 3,200-kilometer U.S.-Mexican border, claiming Mexico would pay for it.

As president, however, Trump has sought U.S. taxpayer funding, but Congress has balked, leading to the ongoing shutdown of a quarter of U.S. government operations, furloughing 800,000 government workers and forcing another 420,000 to work without pay.

The shutdown is now in its 10th day with no end in sight, and likely extending past Thursday when a new Congress is seated, with opposition Democrats taking control of the House of Representatives from Trump’s Republican Party. Republicans will maintain their majority in the Senate, leaving Washington with a politically divided government in the second two years of Trump’s first term.

Trump wants $5 billion as a down payment on the barrier that could cost more than $20 billion, but Democrats have only agreed to $1.6 billion to improve border security, but no wall money. Trump and Democratic lawmakers have not held any negotiations for days over the wall dispute.

Kelly added, “But we left a solid concrete wall early on in the administration, when we asked people what they needed and where they needed it.”

In a second Twitter remark, Trump said, “I campaigned on Border Security, which you cannot have without a strong and powerful Wall. Our Southern Border has long been an “Open Wound,” where drugs, criminals (including human traffickers) and illegals would pour into our Country. Dems should get back here (and) fix now!”

Trump on Sunday tweeted that Democrats “left town and are not concerned about the safety and security of Americans!”

Democrats scoffed at the accusation.

“This is the same president who repeatedly promised the American people that Mexico would pay for the wall that he plans to build,” New York Rep. Hakeem Jeffries said on ABC’s This Week program. “Now he’s trying to extract $5 billion from the American taxpayer to pay for something that clearly would be ineffective.”

“President Trump has taken hundreds of thousands of federal employees’ pay hostage in a last ditch effort to fulfill a campaign promise,” the Senate’s No. 2 Democrat, Dick Durbin of Illinois, tweeted. “Building a wall from sea to shining sea won’t make us safer or stop drugs from coming into our country.”

In a series of tweets on Friday, Trump again threatened to close the entire U.S.-Mexico border and cut aid to Honduras, Guatemala and El Salvador if Congress failed to give him money to fund the wall. He also asked for changes in what he said was the United States’ “ridiculous immigration laws.” SEE ALSO:

Closing the U.S.-Mexican border would mean disrupting a $1.68 billion-a-day trade relationship between the two countries. In addition, immigrant advocates have called any move to seal the border “disgraceful.”

In a tweet Saturday, Trump linked Democrats’ “pathetic immigration policies” with the deaths of two Guatemalan children while in U.S. custody.

His comments, the first to reference the children’s deaths, came the same day Department of Homeland Security Secretary Kirstjen Nielsen was finishing a two-day visit to the southern U.S. border, where she said in a statement, “The system is clearly overwhelmed and we must work together to address this humanitarian crisis.”

Trump has declined to comment on whether he might accept less than $5 billion for wall funding. When asked how long he thought the shutdown would last, Trump told reporters, “Whatever it takes.”

Democrats have blamed Trump for “plunging the country into chaos” and have noted that Trump, before the partial work stoppage took effect, said he would be “proud” to “own” a shutdown over border wall funding.

Home » Trump: US-Mexican Border Wall Would Not Be Solid Concrete