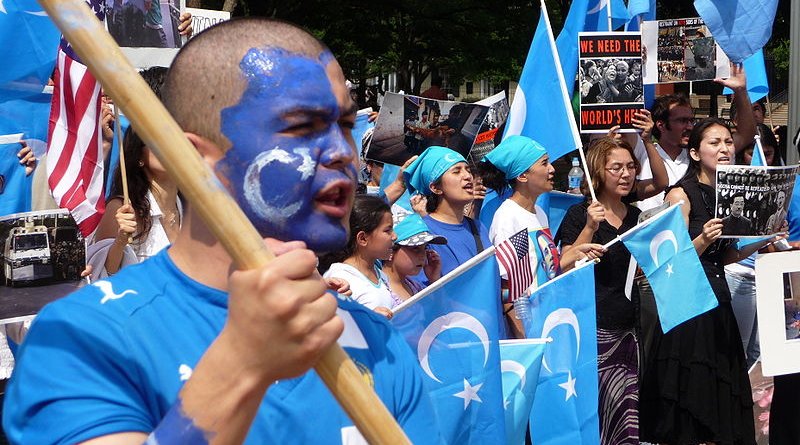 As hundreds of thousands of Uyghurs, ethnic Kazakhs and ethnic Kyrgyz continue to be imprisoned in so-called “education camps” in the People’s Republic of China, governments around the world continue to interact with Beijing, including deciding to establish diplomatic ties with the Chinese government instead of the Republic of China (Taiwan), as has been the recent case of Kiribati and the Solomon Islands.

Every country has a duty to protect and promote its own national interests, however it is problematic that many governments continue to praise Beijing in spite of obvious, and well-documented by now, human rights violations against an entire culture.

Justifying the ending of a culture….

By now the suffering and tribulation of the Uyghurs has been well-documented. The goal of the Chinese government is to eradicate Uyghur culture in order to cement its control of the vast Xinjiang province (known as East Turkistan). The reasons why Beijing is carrying out this policy can be summarized as follows:

Economically: The region connects the rest of China to Central Asia, the “buckle” in the Belt and Road Initiative.

Militarily: The region serves as a buffer zone that would protect the rest of China from hypothetical aggression from the greater Central Asia region.

Politically/internal stability-oriented: East Turkistan’s push for independence is a concern for Beijing, as it faces similar aspirations in Tibet, in addition to the ever-present Taiwan, and maybe eventually in Hong Kong given the ongoing protests. For the record, East Turkistan declared independence in 1933 (the First East Turkistan Republic) and in 1944 (the Second East Turkistan Republic, which was overthrown on December 22, 1949 after the People’s Republic of China invaded the region). Similarly, Beijing’s argument for this massive operation is that it is an attempt to combat terrorism and crime in the region.

It is estimated that between 1 million and possibly 3 million Uyghurs, in addition to ethnic-Kazakhs and ethnic-Kyrgyz are imprisoned in Chinese concentration camps. As part of a December 18 event at the Hudson Institute, a think tank in Washington DC, the institute’s senior fellow Nina Shea stated that what is going on right now “is one of worst human rights and religious persecution situations of our day, in fact of our age. It is both a crisis of religious persecution and of human rights violations of epic proportions.”

In early December, a Chinese official, regional government chairman Shohrat Zakir, “told reporters in the Chinese capital on Monday that everyone in the centers had completed their courses and – with the ‘help of the government’- had ‘realized stable employment [and] improved their quality of life,’” according to the BBC. This is a confusing statement, and maybe it signals that most Uyghurs are been moved to prisons.

Thanks to video footage, leaked documents, accounts from former imprisoned individuals, and investigative reporters, the world is now aware of the situation and what is going on behind prison walls. Moreover, Beijing is carrying out a repressive campaign as it attempts erase Uyghur culture – paramilitary troops (the Bingtuan) and civil servants have been deployed to the region, and it is not unheard of to hear of Uyghur women forced into arranged marriages with Chinese men, or Uyghurs forced to eat pork or drink alcohol in order to avoid being sent to camps. The fact that most Uyghurs are Muslims is a further incentive for Beijing to carry out its repressive activities. Finally, it is worth noting that technology is taking a prominent role in Beijing’s strategy, as new apps, cameras and other gadgets have allowed for a truly 1984-esque Big Brother to become operational in the region.

Apart from the previously mentioned Uyghurs, other imprisoned individuals include ethnic Kazakhs, and ethnic Kyrgyz, and Kazakhstani activists have made strives to have their compatriots freed and returned. Interestingly, these protests have become mixed with a new wave of anti-Chinese sentiment in Central Asia due to Beijing’s growing influence there.

What is worth noting is the reaction of the international community to this ongoing situation. Without a doubt, many organizations have protested the treatment of the Uyghurs. Entities like the International Consortium of Investigative Journalists, and the Facebook Page of the East Turkestan National Awakening Movement, have carried out exhaustive investigations and provided irrefutable evidence of the sufferings of the Uyghurs.

At the governmental level, there have been some important developments. For example, the US House of Representatives has passed the “S.178 – Uyghur Human Rights Policy Act of 2019 amended as the Uighur Act,” which calls for an investigation of what is going on in these camps, and also advises the Trump White House to put sanctions on Chinese government officials and companies associated with the ongoing situation. Similarly, “in October, 23 nations backed a British statement at the UN condemning China’s human rights record in Xinjiang.”

However, other governments have continued to deal with Beijing. For example, in November, the government of the Solomon Islands and Kiribati decided to switch recognition from Taiwan to China, a big victory for Beijing. Similarly, in early December the government of El Salvador accepted “gifts” from Beijing, “including a stadium and water treatment plant.” There had been some hope that President Bukele may decide to reverse his predecessor’s decision to recognize Beijing and switch back to Taipei, but the acceptance of this package renders that hypothesis pointless. Another country that has sought to increase ties with China is Greece, as President Xi Jinping recently spent three days in the European state; “Athens rolled out the red carpet for Xi as its center-right government sought to capitalize on Greece’s burgeoning role as China’s ‘gateway’ to Europe,” explains The Guardian. Meanwhile, China has transferred “ten VT-4 main battle tanks – the final lot of the total of about 50 vehicles – and 38 VN-1 armored personnel carriers, among other military equipment,” to Thailand, a strong sign of growing defense ties.

Even nations like Indonesia and Saudi Arabia, two predominantly Muslim nations (in addition to the latter country being the home of the sacred cities of Mecca and Medina), have either been silent or supported China’s policy, labeling it as “internal affairs.”

At the aforementioned Hudson Institute event, Nury Turkel, board chair of the Uyghur Human Rights Project, summarizes the situation as follows “China has been successful in buying silence through diplomatic pressure, economic incentives, and coercive methods. Governments, businesses and international organizations fear the consequences of annoying [Beijing].”

The situation that the Uyghurs in East Turkistan (Xinjiang for Beijing) are facing is undeniable, and plenty of reports and commentaries are published regularly which discuss the situation in-depth. Moreover, in the era of social media and instant communications, there is a wealth of raw data, particularly videos, about the situation in these concentration camps and the fate of their prisoners.

While it is understandable that governments seek what is best for their respective citizens, it is impossible to not see irony that around a million Uyghurs are suffering and Uyghur culture is effectively being erased, all while most governments choose to ignore it and deal with Beijing as usual.

The views expressed in this article belongs to the author alone and does not necessarily reflect those of any institutions with which the author is associated. This article was published by Geopolitical Monitor.com