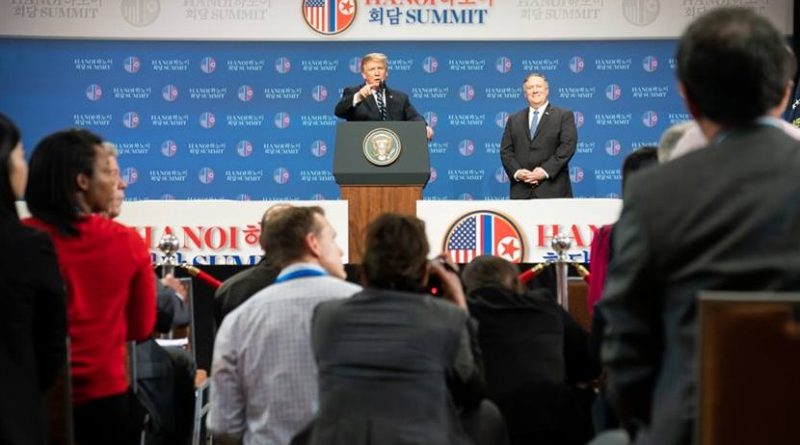 The table had been set for a celebratory lunch at the landmark Metropole Hotel and a ceremony prepared for U.S. President Donald Trump and North Korean leader Kim Jong Un to sign agreements. But both events were hastily canceled just before noon Thursday, bringing a premature end to the second summit by the leaders of the two countries.

“You always have to be prepared to walk,” Trump said, adding “I could have signed something today” and confirming, “we actually had papers ready to be signed.”

Kim, according to Trump, had promised at dinner the previous evening that North Korea would not conduct further nuclear or missile tests.

North Korea’s foreign minister, Ri Yong Ho, at a rare midnight media briefing in Hanoi, declared that his country’s negotiating stance would not change even if the United States seeks further talks.

At the two-day summit the Americans demanded one additional concession from Pyongyang beyond the dismantlement of the Yongbyon complex, Ri told reporters at the Melia Hotel where Kim is staying.

Calling it a realistic proposal, he said North Korean negotiators sought a partial sanctions relief in exchange for continuing to halt its nuclear and long-range missile testing.

In his news conference, President Trump described the Hanoi talks as “productive” and said he thinks the two sides will eventually reach an agreement about denuclearization of North Korea.

Secretary of State Mike Pompeo, standing alongside Trump, in a large conference room of the JW Marriott Hotel plastered with colorful banners touting the summit, said he hoped talks between the two countries would resume soon.

There were “timing and sequence issues” that prevented the two leaders from crossing the finish line, said Pompeo, who along with National Security Adviser John Bolton are seen as hardliners in the administration in dealing with Pyongyang.

Trump, in response to a reporter’s question, said he had not committed to a third summit with Kim. He also indicated North Korea, which has had numerous international sanctions imposed upon it, would not be punished for the lack of progress.

“I don’t want to talk about increasing sanctions, they’re strong,” said Trump, noting the burden they have had on impoverished North Korea’s population.

The U.S. president said he would make calls on the way home on Air Force One to South Korean President Moon Jae-in and Japanese Prime Minister Shinzo Abe.

There was a quick expression of disappointment in Seoul, where Moon has been a cheerleader for the Trump-Kim talks.

“It is unfortunate that we didn’t see a complete agreement between President Donald Trump and Chairman Kim Jong Un,” read a statement issued by South Korea’s presidential Blue House spokesman Kim Eul-kyeom. “At the same time, it is also true that we have more meaningful progress than ever before.”

“It is little wonder these negotiations broke down after Trump has spent more time in office blowing up nuclear treaties than building them,” said Akira Kawasaki of the international steering group of the International Campaign to Abolish Nuclear Weapons, which was awarded the 2017 Nobel Peace Prize. “We need a real plan rooted in the international community and treaties like the Treaty on the Prohibition of Nuclear Weapons, which the Koreas could join tomorrow and begin the disarmament process with legitimacy.”

A former State Department official, who specialized in Korean issues, expressed hope the two countries will resume working-level negotiations as soon as possible.

“If, as President Trump claims, the United States walked away as a negotiating tactic, that is not necessarily a bad thing because it can demonstrate to North Korea that Washington is not desperate for any deal whatsoever at the summit and that Pyongyang can’t just use the time pressure and media focus in a summit situation as leverage,” Mintaro Oba told VOA. “It’s equally possible that U.S. negotiators walked away from the prospect of smaller but meaningful gains because their negotiating position was too inflexible or there were disagreements on the U.S. team. That would be far more concerning.”

While some U.S. officials attempted to lower expectations for the outcome of the second summit, Trump was under pressure to extract something beyond the vague commitment made by Kim last June in Singapore on pledging to give up his nuclear weapons and ballistic missiles in exchange for a lifting of crushing international sanctions on the impoverished country.

“I suspect North Korea calculated that Trump was desperate for a deal and was going to fold on sanctions relief. It wasn’t a bad bet, I think, but it didn’t end up paying off. Trump is actually quite unpredictable about when he folds and when he raises,” said James Acton, the co-director of the nuclear policy program of the Carnegie Endowment for International Peace.

The Singapore summit was hailed as a historical event. When Trump took office there were fears of a renewed war with North Korea as the U.S. president threatened to unleash “fire and fury like the world has never seen” on the northeast Asian country in response to its threats against the United States and its allies.

During their talks Thursday, both Trump and Kim also expressed a favorable view of the possibility of North Korea allowing the United States, which has no diplomatic relations with the reclusive Asian nation, to open an office in Pyongyang. There had also been speculation the two leaders might agree to discussions about a peace treaty.

Technically, a state of war still exists on the Korean Peninsula as three years of trench warfare ended in 1953 only after the longest-negotiated armistice in history.

There was one historic, albeit minor, breakthrough during Thursday’s talks. During two events intended for photographers, Kim for the first time responded to questions from foreign reporters.

The initial reply was to a question on whether he was feeling confident about a deal that was asked by David Nakamura of the Washington Post, the day’s designated print reporter for the White House press.

Kim replied in Korean: “It’s too early to tell. I won’t prejudge. From what I feel right now, I do have a feeling that good results will come.”

Any such results, however, will presumably now have to wait for a future encounter between the two leaders.