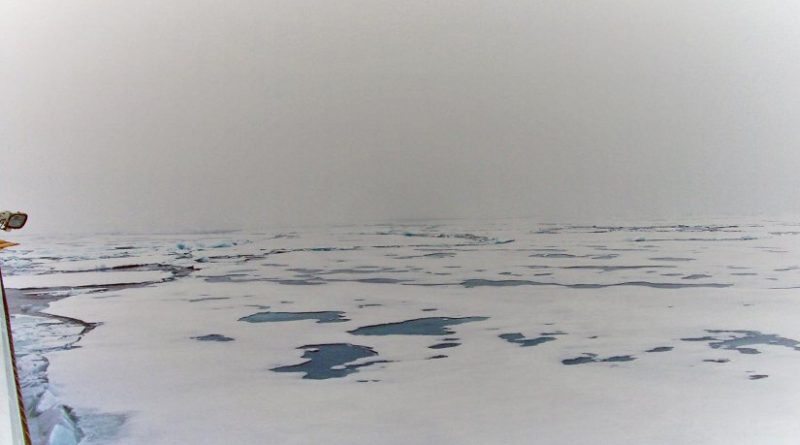 When spring arrives in the Arctic, both snow and sea ice melt, forming melt ponds on the surface of the sea ice. Every year, as global warming increases, there are more and larger melt ponds.

Melt ponds provide more light and heat for the ice and the underlying water, but now it turns out that they may also have a more direct and potentially important influence on life in the Arctic waters.

Mats of algae and bacteria can evolve in the melt ponds, which can provide food for marine creatures. This is the conclusion of researchers in the periodical, Polar Biology.

Heidi Louise Sørensen studied the phenomenon in a number of melt ponds in North-Eastern Greenland as part of her PhD thesis at University of Southern Denmark (SDU).

Bo Thamdrup and Ronnie Glud of SDU, and Erik Jeppesen and Søren Rysgaard of Aarhus University also contributed to the work.

Food for seals and sea cucumbers

In the upper part of the water column it is mainly krill and copepods that benefit from the nutrient-rich algae and bacteria from melt ponds. These creatures are eaten by various larger animals, ranging from amphipods to fish, seals and whales. Deeper down, it is seabed dwellers such as sea cucumbers and brittle stars that benefit from the algae that sink down.

For some time now, researchers have been aware that simple biological organisms can evolve in melt ponds – they may even support very diverse communities. But so far it has been unclear why sometimes there are many organisms in the ponds, and on other occasions virtually none.

According to the new study, ‘nutrients’ is the keyword. When nutrients such as phosphorus and nitrogen find their way into a melt pond, entire communities of algae and micro-organisms can flourish.

From the Siberian tundra

Finally, migratory birds or other larger animals resting on the ice can leave behind sources of nutrient.

There are further factors that may potentially contribute to increased productivity in the Arctic seas: