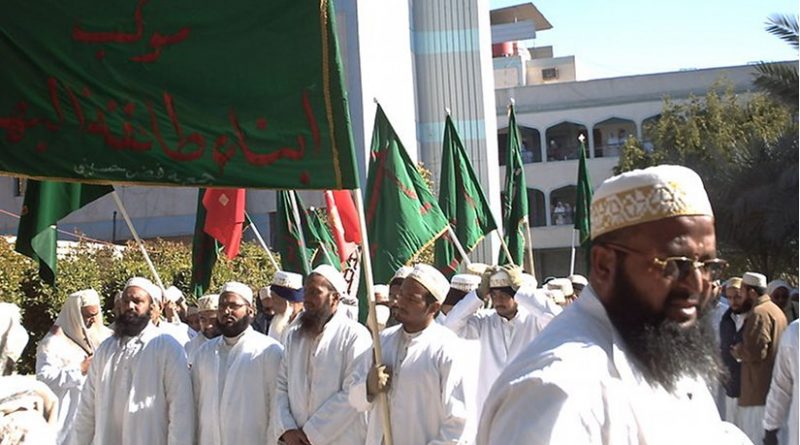 A Detroit doctor Jumana Nagarwala, a U.S. citizen born in Washington who speaks Gujarati, a language of western India., was charged with the female genital mutilation (FGM) of 2 young girls age 6-8 in what is believed to be the first case involving a doctor since FGM was made illegal in the US in 1996.

Dr Nagarwala denied being involved in any such procedure. But on April 21, Dr. Fakhruddin Attar and his wife Faida were arrested in the Detroit suburb of Livonia, and accused of involvement in the same FGM crime as Dr. Nagarwala.

The 16-page criminal complaint issued against Dr. Attar and his wife refers to “a particular religious and cultural community”; now identified as the Dawoodi Bohra, a sect within the Ismā’īlī branch of Shia Islam, who mainly reside in west India, Pakistan, Yemen and Somalia, and whose world leader, Syedna Mufaddal Saifuddin, has condemned FGM.

FGM, although wide spread in limited geographic areas, is opposed by the overwhelming majority of Muslim scholars (ulema). Of the four schools of Sha’aria only the Shafii school of law, declares FGM wajib, or obligatory. In contrast, the other three Sunni schools, plus the Shia schools, consider FGM sunnah- recommended but not required.

World Health Organization says female genital cutting, unlike male circumcision, has no health benefits for girls or women. The procedure can cause severe bleeding, problems urinating and infections, while increasing the risk of complications in childbirth and newborn deaths.

Thus, FGM is not circumcision: it is female genital mutilation, and calling it circumcision is a slander of both Islam and Judaism. It is important that Muslims and Jews make this distinction clear to the general public.

Christianity, Islam and Judaism all teach that circumcision was practiced by Prophet Abraham, who is revered by Christians, Jews and Muslims to this day. Christians do not believe circumcision is still a required observance.

Only pagan governments like the Greeks and the Romans, or anti-religious secular governments like Communist Russia, have forbidden ritual circumcision of males. These governments are led by people who believe that their own humanistic, rational philosophy is on a much higher level than what has been taught by traditional religions, which they do not believe in.

Many European secularists regard circumcision of minors by Muslims and Jews, as a cruel violation of children’s rights. A similar debate is occurring across northern Europe about the issue of ritual slaughter of animals, which devout Jews and Muslims require be performed on conscious animals.

This is part of a larger dilemma facing left-wing parties in Europe, which often struggle to balance their stated commitment to minority rights, with a pushy, self-righteous, secularist agenda that is perceived as intolerant by most members of religious groups.

It is totally false to compare the custom of female genital mutilation to the religious practice of male circumcision.

First, while there are great medical benefits from removal of the foreskin of a male, especially in reducing the spread of HIV; there is no medical benefit to a female from the removal of her clitoris and labia.

In Africa, Jewish and Muslim men have much lower rates of AIDS than uncircumcised Christian men.

Third, male circumcision is a religious requirement; female genital mutilation is only a tribal custom, originating in sub Sahara Africa; which is now being spread by Muslim religious extremists to Asia and the West as part of a reaction against the rising rate of girls going to high school and woman going to work outside the home.

Finally, and most important, male circumcision is derived from the God inspired practice of Abraham and Muhammad.

“You shall circumcise the flesh of your foreskins, and it shall be a sign of the covenant between me and you. Throughout your generations every male among you shall be circumcised when he is eight days old,” (Genesis 17: 7-12a)

Abraham’s first born son Ishmael, was a young boy when he was circumcised, so Muslims do not have to circumcise their son’s on an exact date. A Hadith states: When Ibn Abbas was asked “How old were you when the Prophet Muhammad died?” He replied, “At that time I had been circumcised. At that time people did not circumcise boys till they attained the age of puberty (Baligh).” (Bukhari)

Prophet Muhammad himself selected the 7th day after birth to circumcise his own grandsons: Abdullah Ibn Jabir and Aisha both said: “The Prophet performed the Aqiqah of al-Hasan and al-Hussein (the prophets grandsons) circumcising them on the 7th. Day.” (Related in al-Bayhaq & Tabarani)

Thus, for Jews circumcision is a sign of the covenant that God made with Abraham and his sons Ishmael and Isaac and their descendants for all future generations.

For Muslims it is a sign of their close connection to Abraham which is also celebrated each year at the annual Hajj ceremonies.

For both Muslims and Jews circumcision is a sign that one who submits to God’s commandments and covenant cannot expect a life without some pain and suffering. But when endured for the right reasons pain and suffering always lead eventually to great spiritual benefits.

Female genital mutilation is the exact opposite of circumcision both medically and religiously.