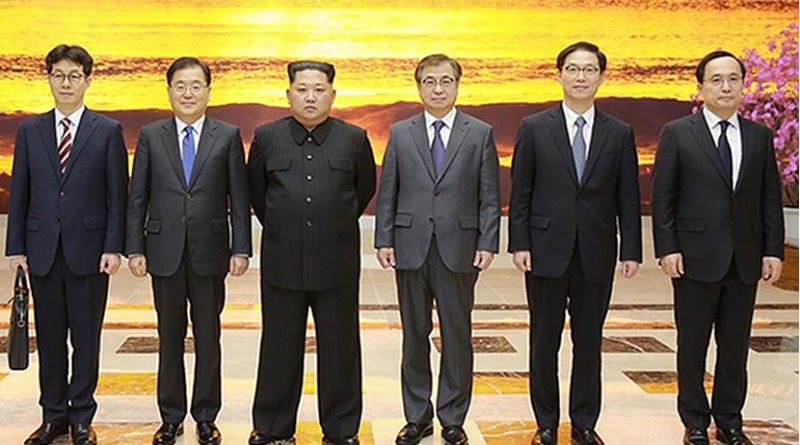 It seems, and certainly feels like a distant number of months since a panel of experts noshed and chatted over how best to overcome the nuclear impasse that pitted North Korea against its southern neighbour and allies.  Held in Seoul last December, the project of attendees hosted by the Korean National Diplomatic Academy was ambitious and lofty: the denuclearisation of the Korean peninsula.

The US angle was one of continued military presence on the peninsula while acknowledging that Pyongyang would not relinquish their top option for empty guarantees.  Parties from Thailand and China felt that area should not become a security buffer zone favourable to the United States and its allies.  Good will entailed true neutrality.  The Russian and Chinese angle was an immediate push to calm the nerves: insist on a “freeze-for-freeze” (a halt to military drills and missile testing), a cold storage metaphor suggesting a seizing up on the road before catastrophe.

Across the parties was a general admission that nothing could be done, or advanced, without genuine measures to seek a state of affairs that would entrench peace even as measures to remove North Korea’s nuclear capability gathered pace.  A peace treaty, in other words, festooned with various security guarantees, would be indispensable.

Now, at the end of April, we have the leaders of Pyongyang and Seoul embracing and emitting tones of rosy confidence, promising steps of reconciliation that would have seemed as eye popping as any Trump tweet. For the first time since 1953, one of the Kim dynasty found himself on the southern side of the demilitarised zone, chatting at the truce village of Panmunjom.

On Saturday, happy snaps were released of the previous day’s meeting between the DPRK’s Kim Jong Un and South Korea’s Moon Jae-in.  Such gestures were bound to tease the driest tear ducts, causing a necessary trickle. Summaries on the summit points were cobbled together for press circulation.  The Seoul Shinmun was not holding back: “No war on Korean Peninsula, complete denuclearisation, formal end to Korean War this year.”

The agreement, known as the Panmunjom Declaration for Peace, Prosperity and Unification of the Korean Peninsula itself promises the machinery for “a permanent and solid peace regime on the Korean Peninsula.”  The “current unnatural state of armistice” was to be ended. “Blood relations” between the states would be reconnected; “practical steps towards the connection and modernisation of the railways and roads on the eastern transportation corridor” would be adopted.

The occasion conjures up, in terms of historical pressings, the initial stages of Ostpolitik, when East and West Germany began a warming process that eventually culminated in re-unification, even if the last stages were induced by the shock of the Iron Curtain’s retreat.  “We are living next door to each other,” claimed Kim, “there is no reason we should fight each other.”

It was impossible to expect certain big mouths to stay silent. “Please do not forget,” came President Donald Trump, “the great help that my good friend, President Xi of China, has given to the United States, particularly at the Border of North Korea.  Without him it would have been a much longer, tougher process!”  All charming, given the berating the man in the White House was giving Beijing’s leadership over previous mouths for not doing enough.

Such events are bound to leave certain parties unmoved.  The minstrel’s song will be falling on deaf ears, notably those hardened by decades of realpolitik cynicism.  Political boffins, notably in the West, continue to obsess with the utterance of the terms “complete denuclearisation”, and wonder whether this will, in fact, happen.

Former US national security advisor H. R. McMaster ran with the line that the DPRK was using its nuclear weapons capability “for nuclear blackmail, and then, to quote, ‘reunify’ the peninsula under the red banner.”  It never occurred to McMaster that pure survival is as good a reason as any, and nuclear weapons supply comforting insurance rather than offensive means.

TheWashington Post was ready to throw some cold water on the cosy gathering, reminding readers of 1992, when Pyongyang signed a denuclearisation agreement with Seoul, then 1994, when the DPRK concluded one with the United States.  In April 2005, the gesture was repeated with North Korea’s four neighbours and Washington. In 2012 came another agreement between Pyongyang and Washington.

Rather than considering the totality of these agreements, and the deeper reasons for their failures, the paper suggested one, inglorious culprit: “North Korea has never stuck to any of its agreements.” Conservative figures such as the Liberty Korea Party’s head, Hong Joon-pyo, find little room to trust, seeing a manipulative dictator highly skilled in stage management.  “The inter-Korean summit was a show of fake peace,” he fumed on Facebook.

Still others, such as Michael E. O’Hanlon, are claiming that the recent moves have little to do with the wily Kim or accommodating Moon, but the brutal sanctions regime that brought suitable pressure to bear on the northern regime.  Kim’s moves suggested “that the world’s collective economic sanctions against his regime are starting to bite”.

Again, these old fictions circulate like counterfeit currency, suggesting that the DPRK’s nuclear regime – the supposed object of such measures – would be impaired.  As with all sanctions regimes, citizens tend to head the queue of punishment. Those in power are rarely scarred.

The Korean peninsula has rarely been entitled to prosper and develop on its own accord, ever at the mercy of ruthless powers and case jottings about security and self-interest.  An arbitrary border, drawn at the 38thparallel by two US colonels, one of them the future Secretary of State Dean Rusk, brought Washington and Moscow into potential conflict.

This random division of political mismanagement precipitated a neurosis between Pyongyang and Seoul, as much a product of inward enmity as it was an external inspiration, poked and prodded by those too afraid to let go.  Perhaps that time is now.