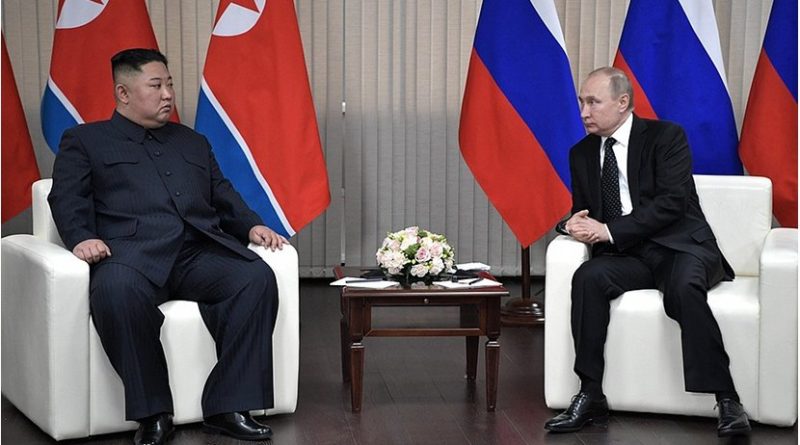 It was precisely the clear failure of the meeting held in Hanoi between the North Korean leader and President Trump, which accelerated North Korea’s search for a meeting with the Russian Federation and later with all its traditional regional allies.

In the talks with President Trump, in particular,   Kim Jong-Un failed to lighten the economic sanctions against his country. This is the political and strategic theme at the core of the North Korean issue.

Firstly, Kim Jong-Un wants Russia’s consent to its denuclearization project, which consists in the gradual lifting of sanctions in relation to the process of relinquishing his nuclear capacity.

It is exactly the request that Kim Jong-Un made to President Trump and that the US President refused.

According to North Korea, the lightening of sanctions should also be connected to an international economic aid program.

A roadmap that has long been supported by the Russian Federation.

In the absence of US reliable support for the bilateral negotiations with Kim Jong-Un, said roadmap could lead to Russia’s direct entry into the North Korean denuclearization process.

The North Korean leader also wants to balance – with Russia – its traditional relationship with China.

He also wants to internationalize the North Korean nuclear issue to increase pressure on the United States.

It should be recalled that, within the UN Security Council, Russia voted Resolution No. 1718, which reaffirmed and resumed the North Korean sanctions against the 2016 nuclear tests. It also largely voted against North Korea in all the 21 UN Resolutions concerning North Korea.

It may have been a mere external aggregation vote on a topic of international resonance, albeit without particular importance, but the North Korean issues are fully at the core of Russian interests.

In all likelihood, Russia has no intention of supporting a nuclear and autonomous country on its border and on a maritime axis of the utmost importance for Russian geopolitics.

It does not even want to evaluate the additional clout of a small nation that can increase its importance in bilateral negotiations, precisely thanks to its nuclear capacity.

For Russia, the North Korean issue can still be resolved by   eliminating the US nuclear protection for South Korea and Japan, with a view to denuclearizing North Korea as well.

Simultaneous denuclearization processes controlled by a body such as the Six-Party Talks, which could also result in an autonomous organization for collective security in East Asia.

Hence, Russia does not want a Korean peninsula with nuclear weapons.

Nevertheless, it wants the North Korean nuclear capacity to keep the US and South Korean ones away, seen as a direct strategic threat to Russia’s Eastern territories.

Furthermore – like China -Russia wants above all a stable North Korea.

It would be terrible for both Russia and China to deal with such  an economically and socially destabilized North Korea that could not even defend them from a nuclear or conventional attack from South Korea, supported by the US bases in Japan and in the rest of the Pacific region.

Or to face the humanitarian and migration disasters of the North Korean populations, looking for survival in China or Russia.

For Russia, a nuclearized Korea is even more independent of China and this is very important for Russia.

Russia has long been cherishing no illusions about China and wants an efficient buffer state in the Korean region.

At legal level, the Russian Federation still recognizes North Korea as an autonomous party to the NPT, considered that Russia has always regarded all the countries that produced and tested nuclear weapons before January 1, 1967 as members of the Nuclear Non-Proliferation Treaty.

Russia, however, does not deem the North Korean arsenal unlawful, but it wants also the “non-official” nuclear countries to abide by the NPT rules.

Hence the denuclearization of the entire Korean peninsula, in particular, remains inevitable for Russia.

This is a primary goal also for China: in fact, the THAAD anti-missile battery deployed by the United States in South Korea in July 2016 can do little against North Korean missiles but, coincidentally, it is deadly for the Chinese ones.

Furthermore, in the Russian logic, South Korea cannot be regarded as a non-nuclear country, considering that it uses the US nuclear umbrella.

For the time being, however, the Russian Federation may offer little to North Korea, in the absence of an explicit bilateral military cooperation treaty.

In fact, the 2000 Treaty between the two countries, which replaced the 1961 one, has no provision concerning military support.

In this case, however, China does not seem to fully agree, considering the signs that its diplomacy is currently sending.

Finally, what about depriving North Korea of its nuclear umbrella, possibly after a treaty with the United States?

Many think that nuclear protection for North Korea could come from China itself and the latter could even offer a technologically better nuclear umbrella than the North Korean one.

Nevertheless, if the United States left South Korea, shortly afterwards South Korea and Japan would produce – on their own – their nuclear arsenal always targeted against North Korea, China and Russia.

Hence, Russia’s mediation solution could be the most likely and rational one in the future: Russia wants the North Korean stability, with or without its own nuclear umbrella.

Russia could also support the idea of recognizing North Korea as a “small nuclear State”, in line with China, which supports a reduction, but not an elimination, of the North Korean nuclear arsenal.

Hence Kim Jong-Un’ stable regime guarantees the reliability of the North Korean border with the Russian Federation – an essential problem for Russia -thus avoiding the huge flows of migrants from the South to the Russian territories.

In this case, also the United States would avoid putting into operation all the nuclear weapons that South Korea could host.

However, let us revert to Vladivostok, the venue of the current Summit between North Korea and the Russian Federation.

Almost certainly, there will be no written documents between the parties.

In spite of sanctions, Russia will continue to need North Korean manpower, while North Korea has long been asking Russia to build the long-planned automotive infrastructure on the border.

Russia, however, wants denuclearization, albeit with the strong multilateral guarantee of North Korea’s border security and stability. Nevertheless Russia is also interested in a resolution of the issue alternative to the one proposed by the United States, which we do not know when will step back into the spotlight.

In fact, in 2017, Russia proposed a roadmap to reduce tension on the Korean peninsula – a proposal also backed by China at the time.

Russia’s and China’s double freeze envisaged that North Korea would stop its nuclear and missile tests, while the United States and South Korea would have to eliminate or, at most, reduce joint military exercises significantly.

A proposal that can be renewed.

Last autumn, within the UN Security Council, Russia had raised the possibility of reducing sanctions against North Korea in exchange for a drastic and autonomous denuclearization of the country.

Certainly, although no joint documents or statements were issued in the Vladivostok Summit, Russia and North Korea want North Korea’s nuclear disarmament to take place gradually and also with US simultaneous positive moves.

Furthermore, for Russia, there are no predictions or signs of political stability regarding the US Presidency.

Nevertheless, for obvious geopolitical reasons, Russia wants above all the stability of North Korea.

The United States also believes that Kim Jong-Un was convinced to hold a dialogue by the threat of further strengthening sanctions, but in fact Kim Jong-Un’s new policy line is not born of fear, but must be seen within a  larger project.

Nevertheless, if – as expected – the sanctions against North Korea reached a peak, Russia could support North Korea’s economy also on its own.

Indeed, the talks in Vladivostok tackled a wide range of economic and humanitarian cooperation issues.

Obviously, Vladimir Putin told Kim Jong-Un that he would report to the USA about the main topics of the meeting held in Vladivostok.

While the strategic problems in the West are evident and particularly  important for Russia’s economic and political stability- considering the issues of Crimea and of the relations with Turkey, as well as the US and NATO deployment of forces on the border with the Russian Federation – it should be recalled that Vladimir Putin is particularly interested in controlling his Eastern borders, which shall protect Russia’s future economic and strategic development.

*About the author: Advisory Board Co-chair Honoris Causa Professor Giancarlo Elia Valori is an eminent Italian economist and businessman. He holds prestigious academic distinctions and national orders. Mr. Valori has lectured on international affairs and economics at the world’s leading universities such as Peking University, the Hebrew University of Jerusalem and the Yeshiva University in New York. He currently chairs “International World Group”, he is also the honorary president of Huawei Italy, economic adviser to the Chinese giant HNA Group. In 1992 he was appointed Officier de la Légion d’Honneur de la République Francaise, with this motivation: “A man who can see across borders to understand the world” and in 2002 he received the title “Honorable” of the Académie des Sciences de l’Institut de France.”