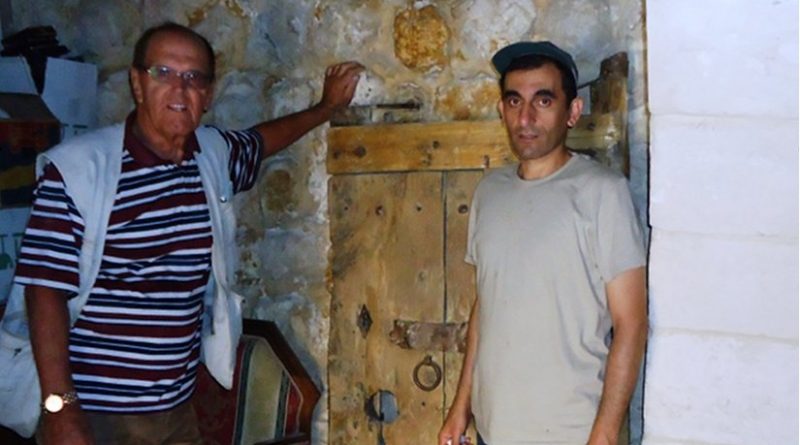 An American visitor and his guide Jesus (Issa) with the 1,700 year old door of St. Trecla, which was stolen on 9/13/2013 was returned in February 2015 when it was discovered in Lebanon’s Bekaa valley.

As of today, approximately 900 Christians and 50 Muslims from the pre-2011 population of 5000, of whom 80% were Christian and 20% Muslim, have returned to Ma’loula, their 90 AD ancient village that many consider the second most historic Christian village, after Jerusalem.

Over the past five weeks, this observer has been surveying and updating data as part of an archeological research project, on a modest selected number of the 152 archeological sites here in Syria that have been severely damaged over the past four years.   Ma’loula, is among the nearly 7000 historic places in Syria that have been looted, burned, or bulldozed or subjected to mindless jihadist iconoclasm as being ‘un-Islamic,” or which have sustained war damage from more than one source.

In some ways it has been a daunting task to visit some sites, given the security situation and need for securing various required permissions-which takes time, given currently conditions in Syria. Plus issues such as intense heat, finding a driver willing to make the trip for a reasonable fee, lining up crucial local experts at the site so one gets solid information and related matters.

On 7/27/2015, this observer and his friends and guides/historians from Ma’loula, Jesus and Moses (Issa and Musa) were delayed for two hours as we sat at the Ministry of Information waiting a green light from the Syria army that the road was now safe, following a night (7/26/2015) of heavy jihadist shelling from the East Gouta\Jobar suburb of Damascus with some mortars hitting near our planned M-5 route north.

Despite losing a few hours of daylight, this observers delayed third visit to Ma’loula, just 35 miles northwest of Damascus, turned out to be a spectacular heritage restoration ‘seminar’ during which we examined firsthand the results to date of the restorative work being done to the town and its religious sites. The experience was exhilarating to say the least.

One does not want to minimize the enormous preservation, restorative and protective work urgently required to salvage our shared global cultural heritage in the custody of Syria for ten millennia. Nor the effort also required in order to ready these sites for the return of international visitors including the archeologists who have work here for many years. But there is some very good news coming out of Ma’loula on this subject. And it is due to the efforts of the local returning villagers who are deeply connected to this cradle of civilization and who are not waiting for the end of hostilities to begin restoration and repair work of their homes and of our shared heritage sites.

The assaults on Ma’loula began in September 7 2013 when jihadists, without warning swarmed into and above Ma’loula and quickly controlled much of the rugged surrounding hills which rise up from the desert to 1,700 meters above sea level. The siege ended when the jihadist were finally driven out of Ma’loula on April 14, 2015 by a combination of the Syrian army, Hezbollah fighters and approximately 70 men from Ma’loula.

Most of the jihadists, after striping the village of much of its antiquities and then torching it, retreated to Lebanon or to the suburbs of Damascus while others made their way north to Aleppo and Idlib.

Christian clerics and scholars worry that Ma’loula’s priceless medieval icons and other works of art may have been destroyed or looted and will never be recovered. But some items are being founds and returned.

Residents who have returned recently to Ma’loula and who are today salvaging and repairing what they can, perhaps ten percent of the village, nearly unanimously emphasized to this observer their shock that the town was attacked at all and that the tight-knit community, where Christian and Muslim women dress alike in traditional Ma’loula and in this sense are indistinguishable. Their children often attend the French Institute in Ma’loula that teaches Aramaic, the language of Christ which is still spoken here and in parts of Afghanistan and elsewhere.  And they always celebrated each other’s holidays.

In Ma’loula, as in most Syrian communities, pre-conflict religious issues rarely existed. The town never had the strategic value of other nearby areas, such as the city of Yabroud to the north, but it does possess vivid symbolic religious importance and has long been a signature site for Syria’s diverse assemblage of faiths and ethnicity. Our guides suggested that this is perhaps the main reason the unprotected and unsuspecting village was invaded, occupied and severely damaged. Three Muslim families from Ma’loula, who became infected with the spreading poisonous hate-filled sectarianism sweeping this region, one being Ktaiman Kamar who reportedly boasted to his Christian neighbors “We will crucify all of you” along with the Rafic Al Shami and Souhail Fadel families are still fighting with rebels and are forbidden to return to their former homes in Ma’loula. As of today, approximately sixty Muslims have returned to Ma’loula and they appear to be living in harmony with their Christian neighbors if amidst some mutual residual suspicion.

But there is good news from this incomparable community. The group of 13 nuns abducted by Jabhat al Nusra Islamic rebels who have been freed in a prisoner exchange are they now regularly visiting Ma’loula to help restore the Nunnery and St. Teccla Monastery as well as the orphanage that they operate. This observer was advised that they plan to return and live full-time in Ma’loula by late August and will re-open the orphanage. Several of the 40 damaged Churches and affiliated religious sites are being restored in a good workmanship manner with respect to the installation of new electric line, water pipes, roof and window repairs and painting. Local and an occasional foreign volunteer are helping.

​To the credit of Lebanese authorities the 1,700 year old door of St. Trecla, shown below which was stolen on 9/13/2013 was returned in February 2015 when it was discovered in Lebanon’s Bekaa valley.

Approximately 65,000 archeological artifacts stolen by terrorists over the past for years have been recovered so far. This is roughly estimated to be around 10% of the total looted from Syria during this period with the two countries receiving the greatest number of stolen antiquities being Turkey and Lebanon.

During the occupation of Ma’loula, the jihadists removed just about every cross of any size they came upon. Many have already been replaced and work continues on painstakingly restoring, wherever possible, art work and icon which were slashed with knives and carved with chisels digging out the eyes from portraits of Christ, his mother Mary, and the disciples among others.

Some townspeople advised this observer that the obsession with gouging out eyes of pillars of Christianity was so that Jesus could not see what they were doing and punish them. Others speculated that much of their time in Ma’loula the jihadist were high on drugs such as captagon and drank regularly from the wine cellars which contained thousands of bottles of wine in this community which in Roman times was dedicated to the pagan god of wine, Bacchus. One thing this observer has repeatedly become aware of it that some jihadist “religious” militia around here who condemn alcohol on U-tube are among its most fervent partakers. Many also appear to be addicted to courage enhancing drugs- including cocaine and  , sometimes fighting 24 hours for two days straight or more and then collapsing on their battlefield spot, only to be discovered by their enemies fast asleep or in a drugged out stupor.

Space does not allow here for a fuller detailed report chronicling all the work being done by the noble returning citizens of Ma’loula or by the Syrian people across this cradle of civilization, to restore our damaged cultural heritage. Without any international aid and not much local funding while facing massive survival problems.

But what is a fact beyond peradventure is that the noble Syrian people, deeply connected to our shared cultural heritage, are achieving nothing less than preserving our identity as a specie and our cultural heritage past for those who will follow us.

Bless every one of them and may the hell that they are enduring end now.