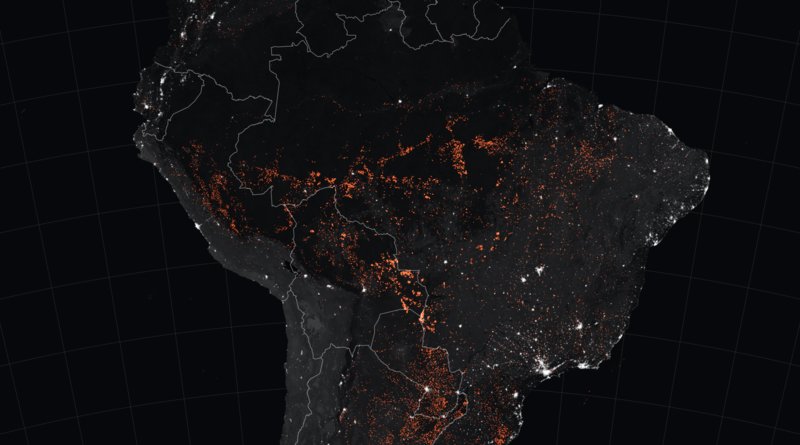 With fire destroying the Amazon, Brazil is caught between global desires – protecting wilderness versus developing its emerging economy.

Brazil’s withdrawal from leadership in climate change is under a spotlight. As fire raged over large areas of the Amazon region, G7 leaders held urgent consultation on how to protect the rainforest that represents up to 25 percent of the world’s terrestrial biodiversity and contributes to cooling the planet. Brazil, the world’s eighth largest economy and sixth largest emitter of greenhouse gases, is caught between global forces – the efforts to protect some of the most sensitive and pristine wilderness versus the desire to develop critical commodities.

More than 70,000 fires rage out of control in the Amazon – many deliberately set to expand farmland – setting off global alarm and underscoring expectations for responsibility by countries not to exacerbate climate change.

The Brazilian Foreign Ministry notified the secretariat of the UN Framework Convention on Climate Change in late 2018 that Brazil was withdrawing its candidacy to host the 25th Session of the Conference of the Parties, or COP 25, of the UN Climate Change Convention. The conference, scheduled November 11 to 22 of this year, is dedicated to negotiating implementation of commitments achieved with the Paris Agreement on Climate Change in 2015, also known as COP 21.

Although targets for reducing emissions are not legally binding, Brazil initially committed to cutting emissions 37 percent by 2025 plus an “intended reduction” of 43 percent by 2030, using 2005 levels as the baseline. Before this year, Brazil had achieved significant emission cuts, thanks to efforts to reduce deforestation in the Amazon and rely on more energy from hydropower and other renewable sources, including wind, solar and biomass.

Environmental policies from the Bolsonaro administration, in power since January, hindered these achievements. The administration also opposes Amazonia land-protection demarcation on the grounds of the Convention on Biological Diversity. In response, some donor countries of the REDD+ Programme – Reducing Emissions from Deforestation and Forest Degradation in the framework of the United Nations Framework Convention on Climate Change – have frozen or withdrawn their contributions in the absence of clear commitment from the Bolsonaro administration to comply with the previous agreements protecting the rainforest. Those funds are channeled mainly through the voluntary Amazon Fund. Therefore, participating in REDD+ is not legally binding for beneficiary countries or donors when efforts to mitigate emissions and forest degradation are insufficient and incompatible with the framework of the Convention on Climate Change.

The massive fires in the Amazon basin rainforest have shelved previously agreed upon objectives, threatening the global effort for reducing climate-change impacts and worsening the planet’s global greenhouse effects. Tropical rainforest protection is a priority worldwide – part of the global commons, along with air, freshwater, the oceans and biodiversity. International conventions suggest that damage to the global commons requires prompt, adequate compensation.

As an emerging economy, Brazil has experienced rapid development with energy and environmental challenges. A drive along the SP-160 Immigrants Highway from Congonhas Airport in the city of São Paulo to the seaside towns of São Vicente and Praia Grande reveals the history of these development policies. In less than 60 kilometers, the highway drops from an altitude of 700 meters to sea level, displaying cutting-edge civil engineering amid the lush Atlantic rainforest as well as the petrochemical city of Cubatão and Santos, the largest port in South America, to the west. Several overhead transmission lines from the Itaipu hydroelectric dam cross the highway, with three overhead high-voltage power lines and several additional circuits. Itaipu lies within the boundaries of Guarani Aquifer, the world’s second largest aquifer after the Ogallala located beneath the US Great Plains. The major oil refinery area of Cubatão, once the site of substantial environmental damages and known as Death Valley, has improved considerably.

Brazil endorsed the Paris Agreement, which entered into force in 2016, but to become law, formal adoption by Brazilian institutions is also required. Brazil’s constitution establishes that international obligations arising from treaties not specifically dealing with human-rights protections only form part of the legal process and require formal legislative approval. Consequently, agreements like the Paris Agreement and later COP agreements, unlike treaties covering human rights, have no immediate effect, and ratification is subject to approval by Brazil’s Parliament.

In the case of the COP 21 Agreement, the Brazilian minister of foreign affairs sent an explanatory statement to the president in 2016, who upon receiving the document and supporting the content put it forward for discussion to the National Congress. Once approved, the parliament issued Legislative Decree No. 140 in August that year. The Brazilian Government filed the document with the UN secretary-general in September 2016, and the treaty entered into force in November of that year.

Recent challenges to the boundaries of forest reserves for indigenous communities and protected areas in the Amazon, encouraging development and exploration, by the Brazilian Ministry of Agriculture likely violated the law and the constitution.

Numerous interests want to develop and profit from Brazil’s rich resources, and massive sales of agricultural and forest lands to foreigners have eroded Brazilian agro-environmental protections, accompanied by the introduction of hostile environmental management land practices and decline of value-added products marketed abroad.

Unrestricted access to critical water resources, potential pollution and over-exploitation of aquifers are also cause for concern. The Guarani Aquifer System was discovered in 1996. The largest area of the aquifer lies beneath Brazil, followed by Argentina, Paraguay and Uruguay. Currently, an estimated 66 percent of Guarani’s water resources is used for public water supply and 5 percent for irrigation. At such levels of exploitation, the aquifer could offer clean water for more than 2,000 years, suggests one study. Although strict laws protect the aquifer, a 2009 joint study by the World Bank and the Organization of American States identified 2,000 drilling wells that access the aquifer, three quarters of which provide potable water to the city of São Paulo.

From the biodiversity side, the Bolsonaro government opposes protections for Amazonia lands as set out in the Convention on Biological Diversity, arguing that these undermine the ability of future generations to market or produce value-added, ignoring the goal of sustainable development, as stated in the Brundtland Report.

Also attached to the Convention on Biological Diversity is a specialized multilateral agreement known as the Protocol of Nagoya. The protocol aims for fair and equitable sharing of benefits arising from the use of the genetic resources of biodiversity and associated traditional knowledge. The Brazilian Parliament has not yet ratified the protocol, also known as the Protocol on Access and Benefit Sharing, despite the country having the highest estimated biodiversity ratio in the world. In the absence of this international instrument, a provisional measure on biodiversity went into effect and lays down national rules for access to genetic assets associated with traditional knowledge and the distribution of benefits not yet available to the public. The executive secretary of Conselho de Gestão do Patrimônio Genético will decide details on implementation and enforcement.

All those movements represent a global battle for commodities – for now led by demand for new, rich agricultural lands, essential for ensuring the global food supply after the US-China trade war and tariffs on soy beans. From the start of the trade war, Europe’s media warned about devastation for the Amazon rainforest.

Protected sites may face a bleak future. Bolsonaro plans to turn the UNESCO Word Heritage site Paraty-Ilha Grande area into a giant resort, a sort of “paradise for golfers.”: “Located between the Serra da Bocaina mountain range and the Atlantic Ocean, this cultural landscape includes the historic center of Paraty, one of Brazil’s best-preserved coastal towns.” Brazil already has more than 100 golf courses even though there is little interest in the sport.

*Claudia Ribeiro Pereira Nunes is a visiting scholar at the Council on Latin American and Iberian Studies with the MacMillan Center at Yale. She is head of GGINNS – the Research Group on Global Comparative Law: Governance, Innovation, and Sustainability. She was awarded the 2019 Emergent Scholar Award by the International Conference on Climate Change: Impacts & Responses in April.