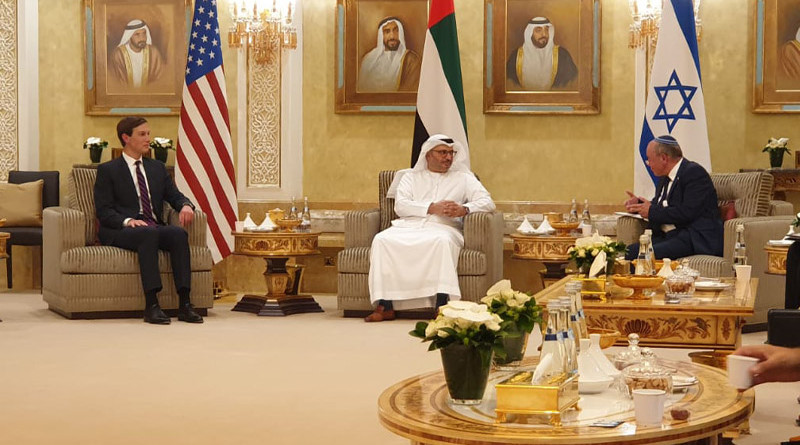 The peace accord between Israel and the UAE is a “courageous step” toward a more stable and prosperous Middle East, officials from the two countries and the US said.

The agreement reached earlier this month was cemented on Monday during a visit by an Israeli and American delegation to the Emirates.
On a historic day, the first commercial flight from Israel to the UAE landed in Abu Dhabi.

“The accord reached between the United States, Israel and the United Arab Emirates on Aug. 13, 2020 is a courageous step toward a more stable, integrated and prosperous Middle East,” a joint statement from the three nations said.

“It carries with it the promise of new bridges that will serve to de-escalate existing conflicts and prevent future conflicts.”

The statement came shortly after Abu Dhabi Crown Prince Sheikh Mohammed bin Zayed said the UAE was committed to a Palestinian state with East Jerusalem as its capital.

He said the deal to establish full relations with Israel in exchange for Israel removing the threat of annexing Palestinian land in the occupied West Bank, was a sovereign decision in favor of peace.

“Peace is a strategic choice, but not at the expense of the Palestinian cause,” he said according to Al Arabiya.

In the joint statement, the UAE, Israel and the US urged Palestinian leaders to “reengage with their Israeli counterparts in discussions aimed at achieving peace.”

On Tuesday, the parties will discuss cooperation in investment, finance, health, space, aviation, foreign policy, and tourism and culture.

“The result will be broad cooperation between two of the region’s most innovative and dynamic economies,” the statement said.

“We will welcome them with a red carpet, like they welcomed us,” Netanyahu said.

Since the agreement was announced, Israel and the UAE have opened phone lines and held discussions between various ministries and officials.

On Saturday, the UAE abolished a boycott law, which means UAE companies and individuals can now trade directly with Israel.

In reaching the agreement, the UAE has become only the third Arab country to have relations with Israel after Egypt and Jordan.

Home » UAE, Israel And US Say Peace Accord To Prevent Future Conflicts