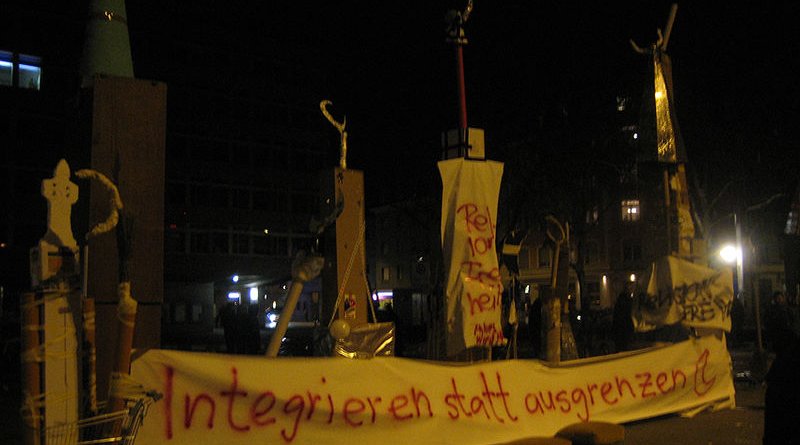 On the evening of the vote, demonstrations against the result were held in Switzerland's major cities. The banner beneath the makeshift minarets reads: "Integrate rather than exclude." Photo Credit: MCaviglia, Wikipedia Commons

A decade ago, a majority of Swiss voters backed a people’s initiative banning the building of minarets in the country. What has changed since?

The people’s initiative was accepted by 57.5% of Swiss voters, even though most politicians, church leaders and Islamic organisations inside and outside Switzerland were against it.

Only the right-wing Swiss People’s Party and the Christian-conservative Federal Democratic Union backed the idea. For them, minarets were symbols of the religious and political rise of Islam.

The “yes” vote was a political sensation that nobody had anticipated.

A decade after the decision, the number of Muslims in Switzerland continues to grow, while the building of mosques – minus minarets – has continued in some cantons.

Indeed, Islam, while not an official state-recognised religion in Switzerland, is the country’s third-biggest faith. However, the community of almost 450,000 believers is very mixed when it comes to origins and attitudes towards faith. About 350 associations represent Muslims’ interests, while preachers operate in some 300 prayer-houses. Four of these have minarets.

In the wake of the minaret ban two cantons have also voted to ban the wearing of burkas. A similar, national “burka ban” initiative is in the works, though observers say it has little chance of being accepted.

Arguments at the time

Ten years ago, the proponents of the people’s initiative over minarets argued that a ban on constructing them in Switzerland “would prevent the further spread of Islam in the country”. They said that minarets had “no religious function” and that the Koran “contained no reference to minarets”. They also claimed there were thousands of minaret-less mosques throughout the world and that such a ban would not prevent Muslims from practising their religion.

Overall, they hoped that the initiative would halt what they saw as a “creeping Islamisation”.

The Conference of Swiss Bishops also declared that a full ban on minaret construction would harm efforts to develop a dialogue of mutual acceptance and respect between religions.

Most Muslims in Switzerland are of ex-Yugoslavian origin. One-fifth have Turkish roots. As a share of the population they represent 4.5%, double the proportion in 1990.