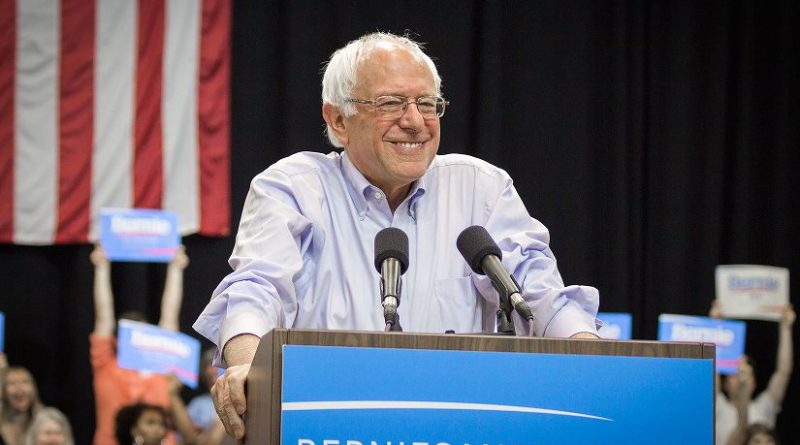 Healthcare was a Top 2 issue in 6/7 issue priority polls conducted in 2018 (and was the Top issue in 4/7). The most important subcategory to voters is lowering prescription drug prices; according to a Harvard poll conducted in mid-December, Democrats and Republicans alike view it as their top healthcare priority. Bernie can point to his 2017 S.Amdt.178 to S.Con.Res.3, which would have allowed for much cheaper Canadian drug importation (it was killed by a slim 52 votes, including one by Cory Booker), as well as 3 bills that he has introduced this year.

As the godfather of Medicare for All, all the recent polling should hearten Bernie. In the aforementioned Harvard poll, 60% of Republicans support a universal Medicare buy-in option. Another poll from mid-October found 52% Republican support for Medicare For All.

A Kaiser Family Foundation poll from last month found that 47% of Republicans support Medicare For All (as long as people have an option to keep their current plan) and 64% of Republicans support a Medicaid buy-in option. Overall support for M4A skyrockets to a 2/3 majority, Kaiser Family finds, once people learn that it will guarantee healthcare as a right, eliminate premiums and reduce out-of-pocket expenses. These KFF findings demonstrate on explaining the particulars of M4A to independents and Republicans.

There is a lot of misinformation floating around about M4A in the media and the White House. Once people will learn about the individual benefits of M4A, as well as the fact that even conservative economists acknowledge that it would save $2T and the fact that every other industrialized nation has universal healthcare, support will continue to soar amongst every voting bloc. Stressing the fact that Bernie is the person who brought M4A into the public consciousness, and that most of his opponents either jumped on the M4A bandwagon recently or don’t support it at all, he can make strides in winning the Over-45 vote (which he lost handily in 2016 to Clinton).

The economy was a Top 2 issue in 5/7 issue priority polls conducted in 2018. This provides both a challenge and an opportunity for Bernie. Trump will boast nonstop about rock-bottom unemployment rates, “lower taxes” (really lower tax withholdings) and the stock market. Bernie (and Warren) are the only candidates who have the financial street knowledge, consistency and experience illuminating the public about these issues to credibly change the status quo. Sanders has been vocalizing the plight of the working class his entire career.

Most non-rich people know that they are being screwed over, even if they can’t give a detailed economic explanation of why…. wages that barely keep up with inflation, shrinking workplace benefits and security; increasing tuition for a decreasing long-term payoff; skyrocketing healthcare costs; an increasingly oligarchic political system that ignores working class voting issues. Trump’s trumped-up boasts will be pretty easy for Bernie to pick apart.

In regards to shrinking unemployment, he can point out that it’s merely a continuation of the economic recovery that started under Obama. Employment figures are inflated by what could be described as two-for-one employment: a poor person might have to work two (or more) part-time jobs to scrape by or a freelancer may work for several companies per year. Government statistics track employer records, not employee records; thus, the aforementioned kinds of workers get counted multiple times. This two-for-one employment is now the rule, not the exception: 94% of jobs created under the Obama administration were part-time or temporary. Further demonstrating this stat-padding is the fact that the number of people who filed tax returns this year decreased by a whopping 12.4%. That would seem to indicate that actual employment has actually plummeted in the first full year of Trump’s tax law.

In regards to Trump’s “tax cuts”, most working class people are seeing little to no savings, due to the elimination of most individual deductions. A lot of the supposed savings are merely from reduced withholdings, not increased returns. In fact, the average refund has shrunk 8.4% this year, according to the IRS website. Even the people who have noticed a benefit will have to kiss them goodbye when they expire in 2025 (meanwhile, the corporate tax cuts are permanent).

Lastly, the stock market is not something that Trump should be bragging about. Yes, it reached record highs in the first half year of the new tax law, but by the end of the year, many stocks had fallen below pre-tax law levels, in the case of major companies like Apple, Facebook and Google. The temporary growth was mostly fuelled by stock buybacks, not an actual increase in multifactor productivity, unit labor costs or industrial production, which have been stagnant for years. Anyway, the wealthiest 10% of Americans own 90% of all shares and these tycoons pay a lower tax rate on these capital gains than the average American does through earned income.

The Republicans are able to get away with passing “voodoo economics” bills because they lie about the effects that it will have and because the Democrats have traditionally done little to call out their b.s. Bernie is a very policy-oriented kind of guy. He will know how to articulate the aforementioned points for the common person- and will have to do so often to counter the GOP’s perpetual lies.

Likewise, he must be tireless in explaining how keystone legislation like Medicare For All, a Green New Deal and free public college will, yes, cost a lot of taxpayer money initially, but will eventually be a net saver of money. M4A will eliminate medical bankruptcy (the #1 cause of bankruptcy), protect the increasing majority of Americans who don’t have jobs that offer healthcare coverage, ax runaway prescription drug pricing and save the lives of 45k previously uninsured people per year. A GND would not only help counter climate change, but also create countless blue-collar jobs (manufacturing, installation, maintenance). It would also help to keep the US economy competitive with China’s; the latter is quickly establishing itself as the world’s green manufacturing powerhouse. Free public college, particularly with an emphasis on trade schools, will help decrease unemployment and job skills-based income inequality. It has been embraced by ultraconservative (and ultra-poor) Tennessee.

Bernie, in his campaign kickoff video, talked about, “the need to end the destructive war on drugs private prisons, and cash bail, and bring about major police department reform.” He has been remarkably consistent on criminal justice reform; 23 years ago, he co-sponsored a bill to legalize marijuana. Back in 2015, he said, “It seems to me that rather than spending huge amounts of money on jails and on private corporations who are incentivized to keep people in jail, it might make a lot more sense to spend money on job training and education so that people do not end up in jail in the first place.”

This speaks to the appeal that Bernie’s economic policies can have with black voters. They would disproportionately benefit unemployed and underemployed black youth. Back in college, Bernie organized a campaign to fight housing discrimination, another major issue in America’s cities and suburbs. Continuing to articulate denunciations of systemic injustice and programs that would help the black working class is key to winning the Presidency. Clinton lost 6% of the net black vote to Trump, compared to Obama in 2012. Losing black voters in swing-state cities like Milwaukee and Philadelphia helped Clinton to lose the Electoral College.

Likewise, the black vote could play the deciding role in 2020 Democratic primaries. Many voters could be attracted to Kamala Harris, a black woman and one of the primary front-runners. So Bernie mustn’t let the media smear him as being “out-of-touch with black voters” like they did back in 2016. Sanders can run on his long history of supporting criminal justice reform, while pointing out Kamala’s record of doing the opposite while she was California A.G.

In terms of immigration, Bernie should take advantage of the increasing unpopularity of Trump’s hardline stance. 2019 polling has shown that 41% of the country wishes to build a border wall, with a 57% majority opposed. On the question of whether there’s a national border emergency/Trump declaring a national emergency, even fewer Americans agree: 34% support Trump’s position and 63% disagree.

In a Quinnipiac poll and a Gallup poll conducted this year, an average of 24% of respondents expressed general dissatisfaction with immigration. The recent debacles over inhumane treatment of immigrants at the border and in detention, plus Trump’s loss on holding gov’t funding hostage over border wall funding, have left a sour taste in the mouths of many moderates on the issue. In the 2016 presidential election, the Democrats lost an 8% net Latino vote lead to the GOP, as opposed to Obama-Romney. Bernie can win back some of these voters and attract new voters by renewing focus on immigration reform and the DACA issue, which has bipartisan support among citizens, but which have been forgotten by the Democratic leadership.

He can also draft legislation to crack down on visa overstays (a far larger contributor to illegal immigration than border crossings) to placate moderates. I would advise that he avoids jumping on the Abolish-ICE bandwagon, as I think it would alienate too many undecided’s. Rather, he should talk about the need to radically reform it. This could include a rapid scaling-down of detention centers, a greater focus on preventing immigrant dehydration deaths on the desert border and a more streamlined system of asylum-seeker processing. As the temperamental anti-Trump, Bernie can also talk about increasing aid, conflict mediations and business opportunities for Central America, to reduce the demand for people from these countries to flee for the US. Bernie’s actions to end the Drug War would also help to end the cartel violence that spikes migration from Latin America.

Much was made of Bernie’s popularity with young voters in 2016. He garnered more youth votes than Hillary and Trump combined. Such dominance didn’t hand Bernie the nomination, however. From 2008 to 2106, the youth vote only jumped in 6 major Democratic primary states (highlighted in the below chart). Bernie only won 2 of them: MI and WI. Wisconsin’s youth voter turnout only increased by 7% in those 8 years, little more than Wisconsin’s 2.4% total population growth during that time. To be fair, Bernie doubled the youth turnout in Michigan, which he won in a stunning upset, but fell in all 4 of the first four primary states.

There’s little to reason Bernie’s youth vote can substantially increase in next year’s primaries, given the plethora of rivals. In last year’s Congressional elections, the youth vote reached a record high of… 31%. One third of that portion voted for Republicans. Bernie’s free public college proposal and similar legislation will naturally attract some politically savvy young people, but to win in politics, you need to secure the Over-45 vote. Bernie’s staff shouldn’t jump over backwards to get young people to Pokemon-Go-to-the-polls, but rather should plan on winning over cynical older voters. Bernie’s massive deficit with older people of color in particular likely cost Bernie the nomination in 2016.

This is a brief overview of how Bernie can be successful in 2020. This time, he will have at least two formidable primary opponents (Harris and Warren) and possibly Biden, as well. The mainstream media and Democratic establishment will likely be major hurdles as well, like they were in 2016. To overcome the dissenters and get through to the voters, Bernie will need perfect a formula of policy talking points, empathy with the working class and people of color, plus substantive critiques of his opponents. Bernie likely would have won in 2016 had he attacked Clinton more aggressively on her corruption and perpetual flip-flopping. Time will tell if Bernie’s new campaign manager, Faiz Shakir, will adapt these ideas.