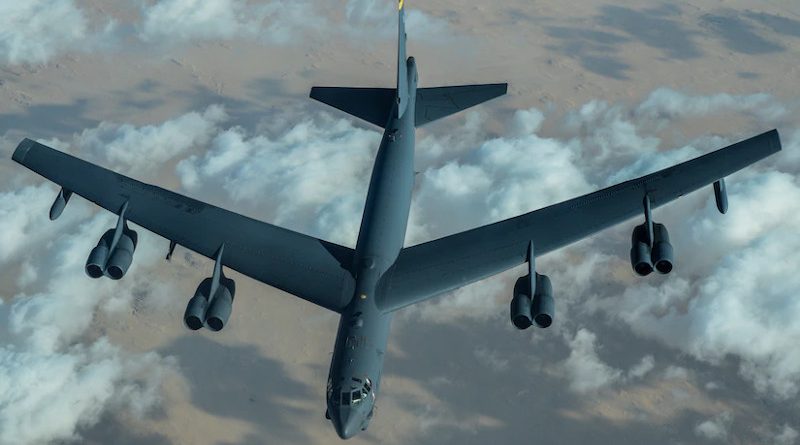 US Air Force B-52 Stratofortress after refuelling during a mission over the Middle East. Photo Credit: U.S. Air Force photo by Senior Airman Aaron Larue Guerrisky

The West-Iran conflict is extremely a-symmetric. It’s the West that historically sought to influence, change, threaten, demand obedience, and punish–with sanctions and more. It liquidated high-level politicians and scholars, shot down a civilian plane, demonised and excluded Iran. Not to speak of giving Saddam Hussein the chemical weapons and the green light for his war on Iran in 1980.

Iran has not done similar harm to the West.

The conflict’s roots go back to 1953 when the US’s CIA and the UK’s MI6 orchestrated a coup d’état, or regime-change, in Tehran and deposed the democratically elected Prime Minister, Dr Mohammad Mossadegh and installed the Shah and made Iran the most militarised country in the region (and gave it nuclear power).

Iran and the West have been on a collision course ever since around various issues. The biggest has been whether or not Iran should be “allowed” to have nuclear weapons. In addition to strong Western political pressure, sanctions and embargo have been imposed since 1987.

From Day One this whole affair has been a sort of the Theatre of the Absurd. Here sits a series of nuclear weapons powers – the US, Russia, the UK, France and China – which for decades have arrogantly ignored every attempt at real nuclear reductions, nuclear abolition and the UN goal of general and complete disarmament – and force through a deal that tells Iran to not acquire what they themselves obviously cannot live without.

Furthermore, next door is heavily-armed nuclear weapons state, Israel, that – in contrast to Iran – became a nuclear weapons state in the 1960s with the full blessings of the West, accepts no inspections, is not a member of the NPT (the Non-Proliferation Treaty) and is the only country violating the UN’s normative work which dates back to the 1970s to establish a legally binding Weapons Of Mass Destruction-free zone in the Middle East.

We should be grateful that Iran has put up with it and joined the nuclear deal in 2015, the JCPOA.

President Trump withdrew the US from that deal and few have understood that that was a gross violation of international law because the JCPOA was part of a UN Security Council resolution. And in addition to the psychological effects of dropping what has been one of the most important deals ever negotiated – in my view, the alternative at the time would have been war – he also slammed new sweeping suffocating sanctions on Iran that increased further the very serious suffering of country’s innocent citizens.

I want my readers to be aware that these sanctions also include humanitarian aid. In 2019 and just as a test, I tried to donate the equivalent of US $ 5 to the Iranian Red Crescent – when millions of people were hit by floods. The Nordea bank blocked the transfer with a blurred reference to there being “sanction in the country.” I have written the story here and published my Open Letter to the Chair of Nordea’s Board. Not a word in response.

And what was – and is – the reason? It is that anyone who does business transactions with Iran will be punished by the US Treasury. Other countries such as the EU have de facto and de jure accepted that American sanctions on Iran shall also be applied by them which means that US law is applied in otherwise sovereign states. That’s why my Nordea bank would not transfer those US $ 5 to help Irans in need.

No media among a few thousands I sent the above article to took up that story.

Even US State Department has acknowledged that Iran was in compliance with every aspect of the JCPOA until the US scrapped it. Thereafter, it increased the level of enrichment but, as stated repeatedly by Iran’s brilliant foreign minister (and West connoisseur), Javad Zarif, it will be adjusted down again immediately after the sanctions that should have been lifted from 2015 are finally lifted.

Let me admit two things before I continue here. One, we have listened more than enough to the general US/Western view and perspectives on Iran – in politics, media and research. We have listened far too little to what the conflict is about and to what Iran’s views of the West and the conflict are and what its future goals may be.

Two, I do not believe that even 1% of the people who shape and conduct the media war and the political war on Iran have ever visited the country or have any deeper sense about its culture, history and people – and the suffocation of the later by sanctions. If you don’t, you should forget about finding a peaceful solution.

The difference between the generalised Western image of Iran and the reality any visitor will experience is, simply put, mind-boggling.

While the Biden-Blinken team states that the US is back and totally different from the Trump days, there is nothing new. Instead, it takes advantage of Trump’s withdrawal. Because what it says is this:

Iran must first come into compliance with the deal and then the US may re-enter – depending, it seems, also on Iran being willing to negotiate a new deal in which several other non-nuclear issues shall be included – such as what conventional missiles and what influence it can have in the Middle East in general and in Syria, Iraq and elsewhere, and with Hezbollah.

And to make its point and to continue stealing Syria’s oil, Biden authorised military attack on Iran-supported militias inside Syria on February 25, 2021 – not one comment pointing out that this was an act of aggression or asking why the US still has hundreds of military facilities in Iraq and 11 bases in Syria around the main oil fields and re-enforcing them.

There is in my view not 1% of a chance that a sovereign state should or would accept such dictate. None of the existing nuclear weapons powers waited for a kind of permission from anyone when they decided to go nuclear; they just did it.

In addition, the religious Supreme Leader, Ayatollah Khamenei, has repeatedly stated that nuclear weapons are ”Haram” – forbidden – according to the Quran. It is my impression from a number of visits to Iran and conversations with various experts, scholars and media people that Iran does not want to become a nuclear weapons power. They see that that would mean escalation and automatically legitimise Israel’s existing up to 400 nuclear weapons.

This entire issue now has a new frame. As of January 22, 2021, all nuclear weapons exist in violation of the new, truly historical, UN Treaty on the Prohibition of Nuclear Weapons, TPNW. In other words, Iran is in a legally correct position, the majority of those imposing themselves on its policies do so from a position of illegality.

As I said, Iran cannot be expected to accept such injustice, such bullying in response to its status as a non-nuclear weapons state.

My prediction, therefore, is – and I hope by all my heart that I am wrong and some miracle happens – that the Biden Administration will conclude that Iran is not bowing down to US dictates and will neither accept its content nor its sequencing.

Iran is not Iraq where soldiers rapidly put on civilian clothes and ran away in March 2003. But Iran is a very small military power when compared with those who could, and probably, would gang up against it – the US, Saudi Arabia, Israel, and members of NATO. And while Iran is rapidly turning its back on the West and its face to China and Russia, they would hardly intervene military in support of Iran.

Iran does have some advantages in that equation of power – such as closing the Hormuz Strait – but, again, US military power would then probably just increase as would the suffering of the Iranian people.

What could prevent such a terrible military scenario?

The only other scenario is that the other parties, China and Russia in particular, to the JCPOA as well as all of the EU with one voice tells Biden this: 1) Rejoin the JCPOA, 2) lift the sanctions on Iran according to the JCPOA and the secondary sanctions on us, 3) let’s dialogue with Iran about how to pick up the pieces and begin various types of civilian interaction and 4) let’s find a formula that enables us all to discuss a new stable order for security and peace in all the Middle East.

With just one positive move by the West, I am positive that Iran would immediately come into compliance again with all provisions and would be eager to cooperate with the West.

It would be reasonable also that the US paid reparations for the harm done to Iran and its suffering people. Remember, that more people died from 13 years of sanctions in Iraq than from the military violence.

However and to my chagrin, the EU has proven unable to deal with anything important with the one voice stipulated in the Lisbon Treaty. It could not get its acts together concerning the refugees in 2015; it has accepted US policies vis-a-vis Iran and also faltered miserably when it comes to the Corona crisis.

Under Trump, the US has undermined its own diplomatic capacity. It is a declining super power that is only second to none in one field – the military. The US does not have a MIMAC – Military-Industrial-Media-Academic Complex; rather, towards its end, like the Soviet Union at its end, is is a MIMAC. There may be quite a few in Washington who see a new armament drive and a new war as a welcome distraction/cover-up for the deep inner crisis that existed and has now become much worse because of the Corona.

If the West and the JCPOA countries could come together and offer Iran something reasonable and fair in the direction of the four points above, we would avoid a terrible war (or some nasty military actions) with unavoidable regional and global consequences. And we would see the world moving in a better, more balanced direction in which Iran plays its rightful role as one of the world’s oldest continuous civilizations with a history going back to 7000 BC.

And my long-term vision in such a perspective?

Iran as “different” as it is, could become a kind of Switzerland of the Middle East and a central player on the new Silk Roads, an important connector of the Far, the Middle and the Near East and the West (Venice, the Arctic, Belgrade and London) – and also include the US if it should decide to become one among equals and seek permanent cooperation instead of permanent confrontation.

*About the author: Prof. Jan Oberg, Ph.D. is director of the Transnational Foundation for Peace and Future Research, TFF and a member of the TRANSCEND Network for Peace Development Environment.

11 thoughts on “Unless Miracles Happen, Iran Could Soon Be Bombed – OpEd”