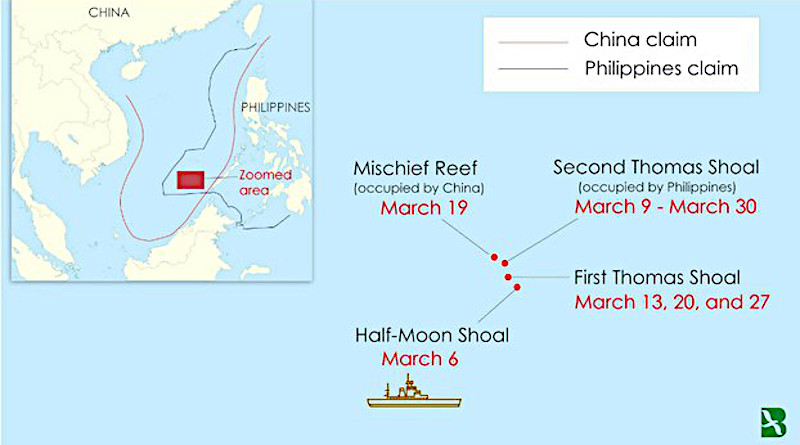 A map representing where a Chinese Coast Guard ship has been patrolling since early March near land features in the South China Sea disputed by the Philippines and China. The inset shows the Philippines’ exclusive economic zone and China’s so-called nine-dash line. Credit: Benar News

By Drake Long and Jason Gutierrez

A Chinese Coast Guard ship that was deployed during recent pressure campaigns in the South China Sea in Malaysian and Indonesian waters is now patrolling near land features claimed by the Philippines, ship-tracking data shows.

The deployment of the ship, which has the call-sign “Chinacoastguard 5302,” near the Philippine-occupied Second Thomas Shoal and two other features claimed by Manila underscores China’s willingness to press its expansive territorial claims, despite a diplomatic détente with the Southeast Asian nation. It also comes as China provides medical aid to the Philippines to help combat the coronavirus.

Vessel-tracking software has allowed Radio Free Asia, a sister entity of BenarNews, to confirm the presence of the ship throughout March near Second Thomas Shoal, First Thomas Shoal, and Half Moon Shoal.

Philippine military and defense officials were not immediately available for comment on Wednesday.

The 5302 is a Shucha II-class vessel, according to the Office of Naval Intelligence’s People’s Liberation Army Navy (PLAN) recognition guide. Ships of this class are nearly 4,000 metric ton displacement and serve as patrol cutters, equipped with helicopter landing pads and space for 30 mm cannons. Ten are in service with the China Coast Guard.

The 5302 has a track record of involvement in previous pressure campaigns in the South China Sea, where six governments including China have territorial claims.

“As countries look inward or are distracted [by the COVID-19 pandemic], like the U.S. and Japan, China has taken advantage of that by increasing its activities in the South China Sea or West Philippine Sea,” Jose Antonio Custodio, a military historian and defense analyst at the Institute of Policy, Strategy and Developmental Studies in Manila, told BenarNews.

“However, since it is assured of the subservience of the Duterte administration to Beijing, it will not worry about any protest from Manila,” Custodio said, referring to Philippine President Rodrigo Duterte who has sought closer ties with Beijing.

“We may soon see more unilateral exploitation of our EEZ,” by the Chinese, Custodio said. EEZ stands for exclusive economic zone – the area of coastal water or seabed where a country claims exclusive rights for fishing, drilling, and other economic activities.

The 5302 was tracked leaving the Chinese-occupied base at Mischief Reef and entering Malaysia’s exclusive economic zone in early December, according to the Asia Maritime Transparency Initiative. It later showed up between Dec. 30 and Jan. 4 as part of a flotilla of ships engaged in a stand-off with Indonesia near the Natuna Islands.

During its deployment near Philippine-claimed features, it was first spotted near Half Moon shore on March 6, but reappeared at Second Thomas Shoal on March 9. Where it was between those times is unclear as its Automatic Identification System (AIS) signal which allows its movements to be tracked had disappeared.

Second Thomas Shoal is the only feature of the three to actually be occupied by the Armed Forces of the Philippines, although the Philippines claims all of them.

From March 9 to March 30, the 5302 moved around Second Thomas Shoal, stopping to refuel at the artificial island built atop Mischief Reef on March 19. Satellite imagery shows a ship likely to be the 5302 docked at Mischief Reef on that day.

The 5302 also took detours to First Thomas Shoal on March 13, March 20, and March 27, before returning to Second Thomas.

The current patrol is only one prong in China’s push to assert sovereignty in the South China Sea. Simultaneously, a Chinese maritime militia fleet has been moving through the Union Banks, an area disputed between China, Taiwan, and Vietnam, as reported by RFA last week. Those ships are still in the Union Banks. In February, a combination of Chinese Coast Guard ships and maritime militia were monitoring and harassing energy exploration efforts by Malaysia in another area of these resource-rich waters.

The sustained deployments by Chinese vessels in contested waters comes as Southeast Asia, like much of the global community, is getting to grips with the COVID-19 pandemic that originated in China. Beijing is now stepping up its offers of aid to neighboring countries to combat the spread of the virus.

That includes the Philippines. While the 5302 has been on the move, China has provided virus test kits although the Philippine Department of Health claimed the kits were only 40 percent accurate. The department apologized on March 29, after the Chinese Embassy rejected any insinuation the test kits were faulty.

Duterte praised Chinese leader Xi Jinping on March 12 for his willingness to send aid to the Philippines to help with the pandemic, saying he had received a personal letter from Xi, Rappler reported. The 5302 was patrolling Second Thomas Shoal at that time.