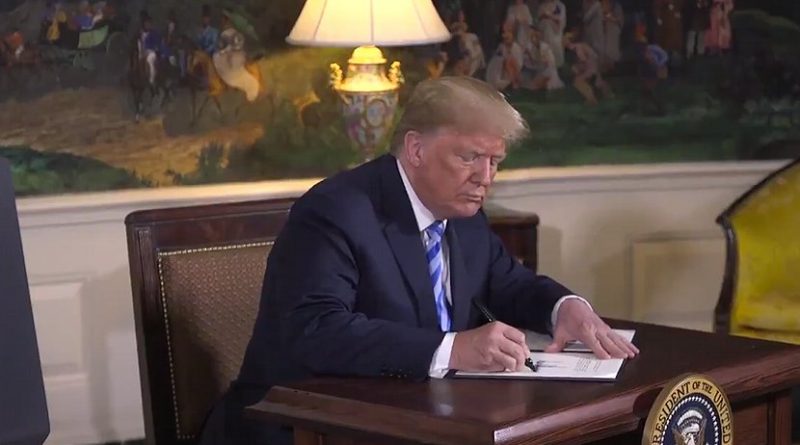 This is not the first time that the American president has surprised the political milieu with new positions. They may not contradict, but are certainly unusual in politics. Only one week separates the violent tweet threatening Rouhani and inviting him for negotiation.

In my view, the past weeks have been full of indirect mediation and contacts from both sides; mostly from the Iranian side, being the disadvantaged party.

Communications bring up ideas and promises. This is what Trump meant when he expected the Iranians “to acquiesce and come up with a better deal” than what the previous US administration expected from them. Since Trump quickly initiated the sanctions, and made them gradual in order to give Iran’s customers among America’s allies enough chance to settle their issues and get out of Iran, he gave Tehran an opportunity to offer its best concessions. Perhaps the clear and frank mediation is the one presented by Oman’s foreign minister. This has expedited such public openness, noting that Oman used to transfer messages between Tehran and Washington in the past.

We must not, however, pre-empt the results and declare victory or defeat. The acquiescence of the Iranian regime or the retreat of Trump is not a football match; but there is certainly one side that has to make concessions. It is Tehran, even though it is still in defiance and has declared that it would not compromise.

Indeed, the Khamenei regime does not have many options, because if it does not compromise, it will collapse under the welter of economic sanctions, signs of internal rebellion and the high cost of its military adventures. The US administration, itself, has not said that its ultimate goal is to change the regime, but rather to modify its behavior, and seek a better nuclear deal that would deprive it of nuclear weapons, unlike the Obama agreement, which prevents it from enrichment for only 10 years.

As for the Trump administration, it may have had enough information about Tehran’s desire to concede, and Trump’s invitation to Rouhani to negotiate unconditionally is merely to save the face of the Iranian regime, which Trump has placed in the critical corner and then opened the door wide.

In the last few months, pro-Tehran governments and organizations in the region have been fearful of the rapid and systematic escalation of Trump’s administration against Rouhani’s government. Even the terms of reconciliation represented by the “12 points” US Secretary of State Mike Pompeo announced in May seemed impossible to them. They actually looked like a roadmap aimed at bringing down the regime, concealed by talking about behaviour change only.

Anyway, with or without pressure from Trump, the behavior of the Iranian regime must change or the regime itself changes, because this is the natural life cycle of violent regimes and their life expectancy. The Supreme Leader’s system is the last remaining extremist regime in the world of its kind, after North Korea’s, which has shown its desire for change. Similar regimes, such as Saddam’s in Iraq, Qaddafi’s in Libya and Castro’s in Cuba, have disappeared; and before them, the Soviet Union and the regimes of Eastern Europe and many others have all collapsed. Communism in China has collapsed as a system, although communists remain in power.

Only Iran has not changed, and has not yet budged one meter since the establishment of its extremist theological security system in 1979.

However, its regime has now peaked and will not be able to control the internal situation if it does not change; and, thus, it would collapse without an external attack within a few years.

*Abdulrahman Al-Rashed is a veteran columnist. He is the former general manager of Al Arabiya news channel, and former editor-in-chief of Asharq Al-Awsat. Twitter: @aalrashed

Home » Trump Has Placed Iran In A Corner, Then Opened The Door Wide – OpEd