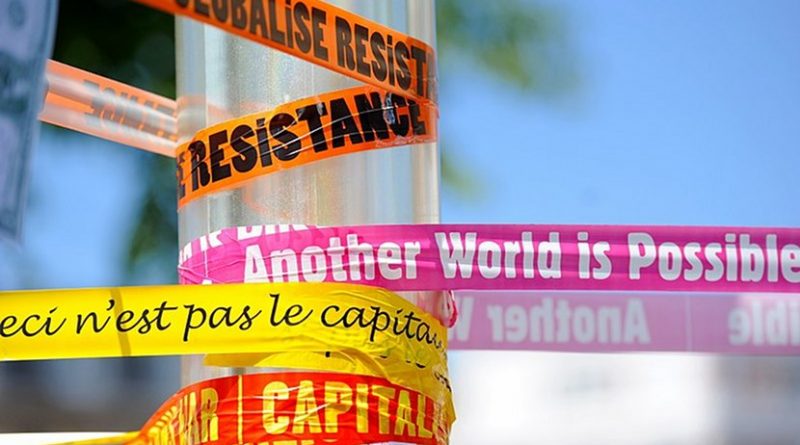 Capitalism is deeply unjust. It is a system under which labour power has itself become a commodity and is bought and sold on the market like any other object of exchange. A condition of neo-slavery like this has been historically presupposed by the concentration of ownership of means of production in the hands of a minority class and the consequent emergence of a propertyless class for whom the sale of their power has been their only source of livelihood.

The fundamentally anti-human character of capitalism has distorted our existence. Our choices and actions have become externalized in forms where they have become counterfinalities. “The consequences of our acts always end up escaping us,” Jean Paul Sartre writes, “since every concerted enterprise, as soon as it is realized, enters into relations with the entire universe, and since the infinite multitude of relations goes beyond our intention.” Thus, human intentions create realities which turn back upon freedom.

Sartre claims that the “act in being realized, undergoes the pressures of the world’s real forces which deform it and render it unrecognizable to its very author.” An oppressive politico-economic structure forms the inorganic totality which corrodes human metabolism. Under capitalism, workers produce in such a way that their products are at once an expression of labor power and at the same time not a true expression of their potentialities; the laborers’ products become hostile to them, and even negate and dehumanize them.

In “Grundrisse: Foundations of the Critique of Political Economy”, Karl Marx writes:

“The social character of activity, as well as the social form of the product, and the share of individuals in production…appear as something alien and objective, confronting the individuals, not as their relation to one another, but as their subordination to relations which subsist independently of them and which arise out of collisions between mutually indifferent individuals. The general exchange of activities and products, which has become a vital condition for each individual – their mutual interconnection – here appears as something alien to them, autonomous, as a thing. In exchange value, the social connection between persons is transformed into a social relation between things; personal capacity into objective wealth.”

The basis for the compartmentalization of human individuality into a collection of discrete things is provided by the existence of private property and uncontrolled profit impulses. In “Comments on James Mill’s Elements of Political Economy”, Marx states:

“My work would be a free manifestation of life, hence an enjoyment of life. Presupposing private property, my work is an alienation of life, for I work in order to live, in order to obtain for myself the means of life. My work is not my life…the specific nature of my individuality, therefore, would be affirmed in my labour, since the latter would be an affirmation of my individual life. Labour therefore would be true, active property. Presupposing private property, my individuality is alienated to such a degree that this activity is instead hateful to me, a torment, and rather the semblance of an activity. Hence, too, it is only a forced activity and one imposed on me only through an external fortuitous need, not through an inner, essential one.”

The alienation inherent in capitalism’s operations misshapes objectification – the process through which we alter the world after our own image. The primary difference between capitalist and communist objectification lies in the fact that the latter allows us to discover ourselves in our own products, and this knowledge expands our self-consciousness. Since individuals are no longer forced to sell their labor to the capitalist in exchange for a wage, and because their basic needs are met, they are left with ample time, energy and resources to pursue the activities of their choice.

When the rusted shackles of capitalism are thrown off, humans gain the ability to develop freely. Productive activity becomes creative activity; an individual’s product would spring from inner resources, talents and inclinations, not from the dictates of the market. Therefore, the product becomes a powerful expression of a human being’s personality. As Sean M. O’Brien says, “it is a far richer objectification than the automobile or the box of Oreos fresh off the assembly line.”

The abolition of generalized commodity production brings about an emancipated place where the alienated labour imposed by the coercive mechanisms of capital gives way to conscious, creative activity. The yoke of necessity – expressed through the brutal anarchy of the laws of commodities and money – is eliminated in order to prioritize the collective rationality of social interaction and establish planned cooperation. In short, freedom for capital is replaced by genuine human freedom.