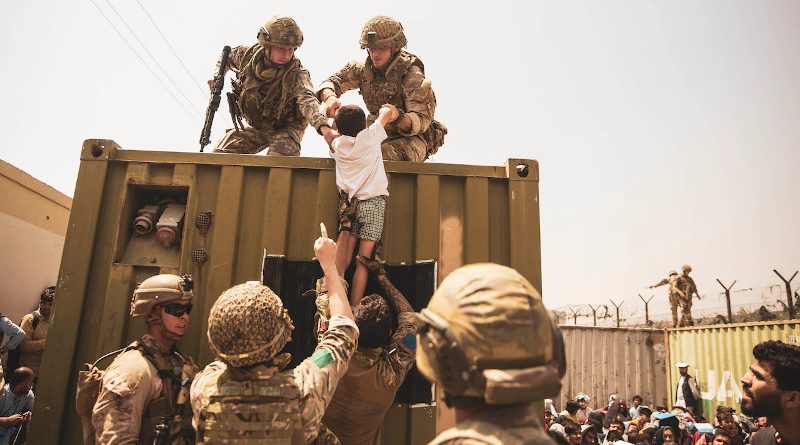 The US has suffered a major blow to its credibility as a global power in the wake of the humiliating withdrawal from Afghanistan and the Taliban’s swift return to power. Recovery from the Afghan debacle will take some time. Until then, it is difficult to imagine the US resuming liberal interventionism in any regional conflict in the near future.

The chaotic withdrawal from Afghanistan has also led to a bitter public debate inside the US. Amid the ensuing blame game, either the Biden administration is singled out for criticism or the buck is passed on to the erstwhile Afghan allies, President Joe Biden’s predecessors or US military commanders involved in the 20-year war in the country.

Interestingly, much of the criticism directed against Biden over the pullout is being levelled by the predatory interests linked to the US military-industrial complex. Their current discourse over the withdrawal, like the previous penchant for intervention, reeks of an imperial impulse that seeks US military hegemony under the cloak of liberal democracy and human rights.

While 9/11 provided immediate justification for waging war against the Taliban, the conflict’s subsequent rationale was built on the portrayal of the Taliban as barbarians, especially in terms of their treatment of women and religious and ethnic minorities. The same discourse has underpinned the arguments against US withdrawal.

What is ignored amid the partisan politics and blame game is the decades of imperial hubris, wherein lies the underlying reason for America’s fall from grace. In fact, it is quite unfortunate to see a great nation that helped liberate the world from the curses of fascism and communism in the previous century face its most surreal moment of weakness today.

Compare this to the “unipolar moment” of the 1990s, when there was no rival to US power following the collapse of the Soviet Union. Historians such as Niall Ferguson described the American empire then as the greatest in world history in terms of military, political, economic and technological capability. But it was an empire that claimed the right to rule the world while being in denial of the responsibilities that accrued from this right.

This dichotomy has formed the basis of American unilateralism throughout the post-Cold War period, spurred initially by Samuel Huntington’s “Clash of Civilizations” thesis, Francis Fukuyama’s “End of History” claim and the proclamation by George Bush Sr. of a “new world order.” Subsequently, this imperial quest was ideologically refined by proponents of the Project for the New American Century, the neoconservative think tank that helped shape the muscular foreign policy of George W. Bush after 9/11.

Since then, Pax Americana, or the US pursuit of “benevolent global hegemony,” has manifested itself in various conflicts, including Iraq, Syria and Libya. However, Afghanistan is where its unbridled practice became most visible, with the US military-industrial complex being in the driving seat of an imperial venture.

This fact is established by the startling revelations in the voluminous report of the US Special Inspector General for Afghanistan, titled “What We Need to Learn: Lessons from 20 Years of Afghanistan Reconstruction.” The report draws its conclusions from scores of interviews with US military commanders, defense contractors, Afghan officials and other personnel involved in Afghan security and reconstruction activities. Craig Whitlock’s recent book “The Afghanistan Papers” also more or less relies on the same oral history.

The revelations about the extent of US deceit and lying during the war in both works are simply mind-boggling: Top US military and civilian leaders consistently hoodwinked the American public into believing that all was well in Afghanistan. Privately, though, they all believed the war was going haywire. None had any clue about the military strategy or political objective.

Moreover, of the almost $1 trillion spent on the war, less than 2 percent was devoted to Afghan security and reconstruction. The rest was consumed by the Pentagon and the CIA. The SIGAR report lists numerous cases of fraud and corruption by US defense and civilian contractors, Afghan warlords and other stakeholders, in which billions of dollars were siphoned off with impunity.

The nexus between the US military-industrial complex and former US commanders who led the Afghan war, such as Gen. David Petraeus and Gen. H.R. McMaster, has been further exposed by US publishers The Intercept and Responsible Statecraft. The fact that the same commanders now sit on the boards of major US defense contractors in Afghanistan is presented as evidence to show why they are so critical of Biden’s decision to withdraw.

As the dust settles on the greatest military misadventure in US history, further truths will surely emerge about how the US in Afghanistan ultimately reaped the whirlwind of the neoconservative imperial impulse. The course of this war is laced with strategic blunders, which culminated in Donald Trump’s unilateral pact with the Taliban, leaving the Afghan regime and its army at the mercy of this militia. Blaming Biden for the subsequent turn of events, or using the Afghans as scapegoats for US failure, is a rebuke to the thousands who died in the war and the millions left homeless.

Against this backdrop, Biden has done the right thing in taking the US out of Afghanistan. The Afghan debacle has, in fact, already redefined the limits of the American empire by constraining its hegemonic ambition, at least for the foreseeable future. The US still has all the power attributes that make it exceptional in world history. We can only hope that the Afghan exit will lead to a sustainable US global posture — one that abandons the pursuit of global hegemony in favor of viable collaboration with emerging global powers, such as China and Russia.

These powers, together with regional states, have the greatest stake in Afghan peace and stability. Now that the US has rid itself of what was always an unwinnable war, it is in the country’s pragmatic interest to live in and lead a multipolar world, to collectively manage conflicts such as Afghanistan, as well as tackle the real global challenges that form part of the UN Sustainable Development Goals for the future peace and prosperity of humankind.