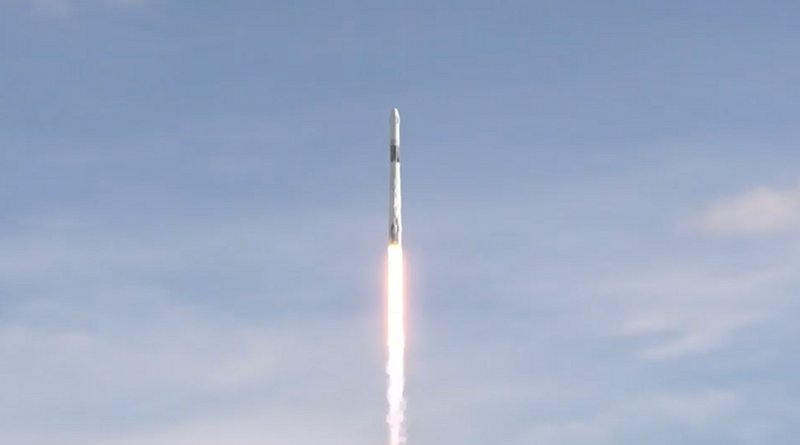 A SpaceX Dragon cargo spacecraft launches to the International Space Station on a Falcon 9 rocket at 6:01 p.m. EDT July 25, 2019, from Space Launch Complex 40 at Cape Canaveral Air Force Station in Florida. The spacecraft is scheduled to arrive at the orbiting laboratory July 27 with the station’s second commercial crew docking port and about 5,000 pounds of science investigations and supplies. Credits: NASA

The numbers of countries and companies active in outer space have greatly expanded in recent decades, complicating this particular geostrategic domain. New “rules of the road” for space are called for. In this regard, the United States is well-placed to press other space-faring countries toward best practices and transparency to the benefit of all.

The convergence of multiple, complex strands of recent activity regarding the use of space and the protection of space assets is resulting in a space environment very different from the past. Formerly, the space environment was largely dominated by a very few countries.

All countries, however, were assured access through the 1967 Outer Space Treaty ratified by 109 countries and signed by another 23, militarised but deliberately not overtly weaponised, and anxiously awaiting the development of a true commercial space sector rather than one fully dependent on government contracts.

Today, a number of formerly nascent space programmes have matured, there is increasingly bellicose talk – and policies – regarding the overt weaponisation of space, and so-called “NewSpace” companies are bringing the commercial space sector to life. All of these strands are made complex by the dual-use nature of the vast majority of space technology and the increasing characterisation of the global geostrategic environment being generally dominated by Great Power Competition (GPC).

Dual-use technology is of value to both military and civilian interests, and when it is military technology it is difficult to tell whether for offensive or defensive purposes. Earth-focused satellites can be used for tasks ranging from maximising crop rotations to weapons targeting. In the United States (US), Atlas, Delta and Titan rockets used to launch civilian payloads were originally developed as missiles. The same is true for China’s Long March launcher family.

Regarding military space systems, the ground-based US missile defence system is considered defensive by the US, but seen as having offensive anti-satellite (ASAT) capabilities by some other countries – and was demonstrated to have such capabilities through Operation Burnt Frost in 2008 when a modified missile defence system was used to shoot down a defunct US satellite. All this means that it is difficult to discern the intended use of the space technology being developed or deployed by space actors.

The Great Power Competition in Space

The uncertainty generated by dual-use technology has always been an issue but is now exacerbated within the atmosphere of Great Power Competition that pervades Washington and other capitals. With Washington, Beijing and Moscow all professing their own versions of America First/China First/Russia First, GPC is rapidly shaping the global environment as one of dominated by zero-sum competitions.

Part of the threat perceived by the US military is the resurgent nature of the Russian military space programme, and the maturing of other space programmes, especially China’s programme. China, seeing the advantages space assets afforded the US during the 1990-91 Gulf War, has been intent on not allowing the US to get so far ahead technologically that it could not breach the gap.

Consequently, China’s space programme today includes an expanding space science programme, a human spaceflight programme that will likely soon reach for the Moon, and a robust military space programme which tested a ground-based ASAT in 2007 by destroying one of their own defunct satellites in a high-altitude orbit. That test garnered China a great deal of criticism due to the amount of dangerous space debris created, debris that other satellites have since had to dodge.

Subsequently, China has not conducted any more impact tests, but instead tests ASAT capabilities through more politically acceptable, non-impact missile defence tests. China really set Washington on edge in 2013 when it launched what it called a science mission to an altitude previously reachable only by the US, and subsequently considered a “sanctuary orbit” by the US where it could place its high value assets, thereby potentially putting those assets at risk.

After China: India and Other Players in Space

Since 2013 the US has taken a more bullish attitude toward space security. In the past the US went to great efforts to avoid the overt weaponisation of space, using such Orwellian terminology as “offensive counterspace” to describe capabilities with the potential to be used as weapons. Now, however, the military openly professes to wanting the deployment of space weapons in the near term. That rhetoric, not unexpectedly, quickly resulted in countries wanting to keep-up-with-the-Joneses, evidenced by India’s ASAT test in 2019.

India remembered the sting of being dubbed a nuclear “have not” in the 1968 Non-Proliferation Treaty. It was determined not to be left on the outside again should those who had already tested ASATs again decide it was in their interests to keep others from doing so.

Initially criticism of India was tamped down by rationalising that they had been responsible about not creating dangerous debris. When the debris later proved more than originally thought, and the idea of ASAT proliferation sank in, even top Pentagon officials suggested that perhaps more “D” and less “M” was in order. The US has got itself into a position of “do as I say, not as I do”.

Add to all of this NewSpace companies in the US and elsewhere seeking to economically develop space in ways ranging from bringing down launch costs, to tourism, to space mining, and there are more actors, more activity and more challenges to US “dominating” space than ever before.

The Pentagon describes the space environment as Congested, Contested and Competitive and that raises the question of how economic development will be affected by this new environment.

The Pentagon has also suggested that President Donald Trump’s directed creation of a Space Force is to protect US economic interests in space.

But it is not clear that businesses requested such protection and whether they see the overt weaponisation of space as good or bad for them. One thing is clear though, all activity – public or private, civil or military – is dependent upon the sustainability of the space environment.

Hopefully, space “rules of the road” called for after India’s ASAT test will get even a fraction of the attention (people and funding) that the creation of Space Command, a Space Development Agency and the Space Force has. Even a small fraction would be a quantum leap forward. The US position in space is still such that, with commitment, it could lead other spacefaring countries toward best practices and transparency to benefit all.

*Joan Johnson-Freese is a Professor and the Charles F. Bolden, Jr. Chair of Science, Space & Technology at the Naval War College in Newport, Rhode Island. She writes extensively on space security, military education, and gender and security and contributed this to RSIS Commentary. The views expressed are those of the author alone and not those of the US government, the US Navy or the Naval War College.

Home » The Next Race: The Geostrategic Contest In Space – Analysis