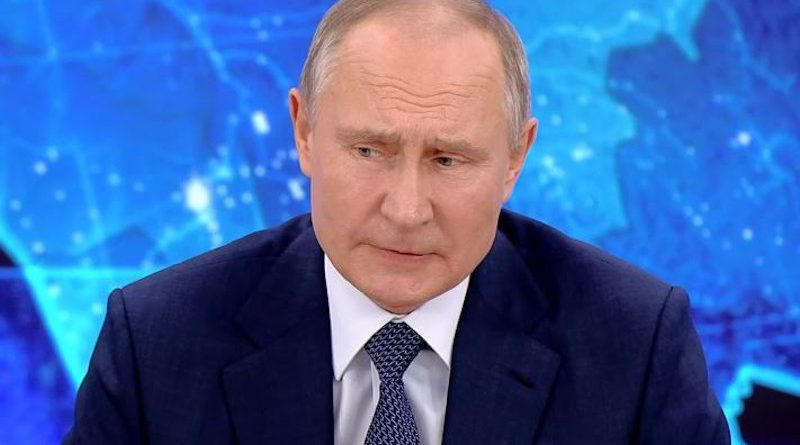 (RFE/RL) — The waning days of 2020 were rife with portentous activity in Russia.

The Investigative Committee announced a new criminal case against opposition leader Aleksei Navalny on large-scale fraud charges. The Justice Ministry added five individuals to its list of “foreign mass media performing the functions of a foreign agent” under controversial legislation that could potentially be enforced against almost anyone in the country.

New restrictions were imposed on public demonstrations, and blocking streets was criminalized. Online defamation is now punishable by up to two years in prison. The government has taken on new authority to block foreign and domestic websites that it asserts are censoring Russian state-media content.

Denis Volkov, director of the independent Levada Center pollster, says developments like these form “a general context of intensifying pressure by the authorities on the active portion of society.”

The Kremlin’s actions, Carnegie Moscow Center analyst Andrei Kolesnikov adds, show that President Vladimir Putin’s government is feeling anxious in a changing social and political climate as it prepares for elections to the State Duma, the lower parliament house, that must be held by September. Those elections, in turn, are the last scheduled national political landmark before the end of Putin’s current presidential term in 2024.

“A war is getting under way,” Kolesnikov told RFE/RL. “I’m afraid that [in 2021] it will seriously intensify. The situation could become much more confrontational. It is a very dangerous moment.”

Putin and the Kremlin-controlled United Russia party are in a weak position as the elections approach. The coronavirus pandemic and its attendant dislocations have accelerated social processes in Russia that have been observable for about the last three years. Putin’s own approval-disapproval ratings now are similar to what they were in the restive period of 2011-12, during which he returned to the Kremlin after Dmitry Medvedev’s one-term placeholder presidency.

“Earlier we could speak confidently about the existence of a pro-Putin majority,” Kolesnikov said. “Now it is very hard to say whether it exists, whether it can be mobilized during the elections. Most likely, it is falling apart into several minorities whose members may not be democratically-minded but are unhappy with the current situation.”

Primarily, the roots of the dissatisfaction are economic. Although Russia has weathered the pandemic better than many expected, the government forecasts real disposable income to fall by 3 percent in 2020, while outside economists say that figure is 1-2 percent too low. “Incomes were shrinking continuously in 2014-17 and, by the end of 2020, they will be 10 percent lower than in the ‘pre-Crimean’ year of 2013,” wrote RBC economics editor Ivan Tkachyov last month, referring to Russia’s seizure of the Ukrainian region of Crimea in 2014, which gave Putin a massive popularity boost.

For the poorest Russians, the situation became so difficult that the government set retail price caps for some basic foods in December.

Many voters were also disenchanted by the way the constitution was rewritten in the early part of the year in a process that they believed was driven by Putin’s personal interests rather than their good or even the country’s.

“It was clear to everyone that the amendments to the constitution were adopted with one goal in mind – to secure the possibility [for Putin] to run for more presidential terms,” said Boris Grozovsky, an economics columnist and editor of the Events And Texts Telegram channel. “That is why it also ‘nullified’ Putin’s popularity and the legitimacy of the political regime. That is why immediately after the amendments, he had to significantly increase repressive measures both on the level of legislation and in practice.”

Either instinctively or by design, Putin seems to have shifted his political paradigm. And the clearest example of this shift is the fate of his Direct Line call-in program.

For most of his two decades in power, Putin has held the annual, marathon Direct Line question-and-answer program in which he fielded carefully choreographed questions from average Russians on issues such as the availability of playgrounds, the notorious condition of Russian roads, shortages of medicines, or the plight of teachers or doctors.

In later iterations of the program, regional and cabinet officials were forced to listen in as Putin heard the complaints and then were grilled by the president about why their region was experiencing such a problem. In some cases, the officials returned to screens later in the same broadcast to report, for instance, that road crews had been sent to fill in potholes or that a new playground had already magically appeared.

In short, Putin positioned himself as the traditional Russian “good tsar,” who was ready to rain benefits on the people but who was prevented from doing so by “bad boyars,” or noblemen. This kind of populism played well among much of the Russian public, strongly reinforced by Kremlin-directed state media.

In 2020, however, the Direct Line show was cancelled completely, although a few elements of it were incorporated into Putin’s end-of-the-year press conference with journalists on December 17. At that event, however, no cabinet ministers or regional officials appeared. Putin praised all levels of government for its handling of the coronavirus crisis.

If anyone was to blame for the problems of average Russians, Putin both stated and implied, it was the CIA and other nefarious foreign influences that were determined to restrict Russia in every way. Such statements strongly overshadowed the tiny populist gesture that Putin threw in at the end of the four-hour program when he announced the government would give families 5,000 rubles ($67) for each child under the age of 7.

“Looking at the recent press conference, I had the feeling that Putin was defending the bureaucratic system,” said Mikhail Kasyanov, who was prime minister during Putin’s first term, in 2000-04, and is now an opposition politician. “That is, he defended the power vertical that enables him to run the country.”

“Populism is an effort to appeal to the people, to be on their side, to criticize officials and various bosses while promising citizens that things will be fixed,” he continued. “This time, Putin could not do that since his own negative rating among the majority of Russians is growing. Putin is no longer above the fray, above the bureaucrats.”

Instead of this traditional populist-authoritarianism, “standard authoritarianism” has begun, Kasyanov said, adding that it “could develop into totalitarianism.”

“If automatic systems for running the country are developed,” he said, “Putin won’t have to communicate with the public or meet with business leaders or political elites. He will simply sign little pieces of paper.”

Analyst Kolesnikov agreed that Putin’s old populist approach no longer works as his long reign in power comes up against the growing discontent.

Kremlin political consultants have not forgotten the wave of mass protests that swept Russia in 2011-13, driven mainly by anger over evidence of fraud benefitting United Russia in December 2011 parliamentary elections and dismay over Putin’s return to the presidency in 2012.

That is why the Kremlin has focused its attention on Navalny, Kasyanov said. Russian security agents allegedly attempted to poison Navalny at least three times in recent months, including a near-fatal poisoning with a Novichok-type nerve agent in the Siberian city of Tomsk in August.

In addition, the authorities have opened a new fraud case — who is recuperating from the August poisoning in Germany — that analysts say is aimed at preventing Navalny from returning to Russia. If he does return, he could face prison in connection with the new case and with a previous conviction that he contends was based on fabricated charges.

“Aleksei Navalny is definitely the leader of the street,” Kasyanov said. “When the political struggle intensifies in this way, when the authorities act repressively, then, of course, street protests become the main instrument of struggle against them. So the authorities are trying to remove the leader of any possible future mass protests.”

With reporting by RFE/RL’s Russian Service and Current Time