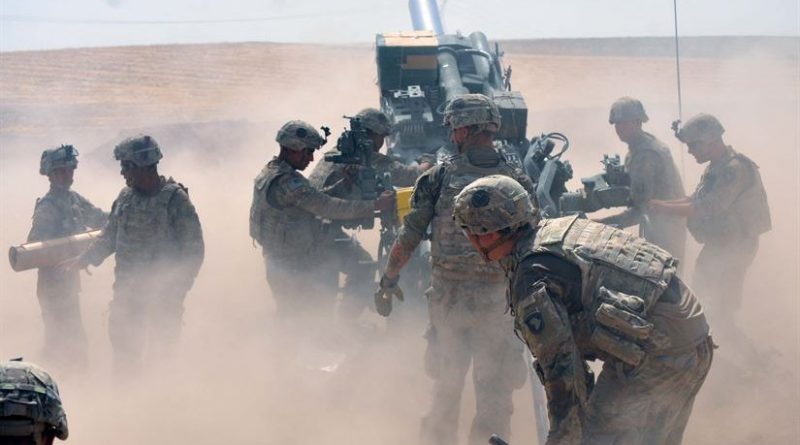 Soldiers with Battery C, 1st Battalion, 320th Field Artillery Regiment, Task Force Strike, begin their crew drill to load another round for a fire mission in northern Iraq, Aug. 15, 2016. The 526th Brigade Support Battalion’s Support Operations Cell and the 336th Combat Support Sustainment battalion’s movement control team in Erbil have sustained operations like this one, which are critical to defeat the Islamic State of Iraq and the Levant. Army photo by 1st Lt. Daniel I. Johnson

The military campaign to oust Islamic State of Iraq and the Levant (ISIL/Da’esh) terrorists from Iraq is nearly won, but the humanitarian crisis is expected to continue for months, if not years, the United Nations top official for the country said Thursday.

“Three months after the Mosul military operation started, combat operations in the eastern part of Mosul have come to an end,” the Secretary-General’s Special Representative for Iraq, Ján Kubiš, told the UN Security Council during a briefing.

He said that the Iraqi forces, with significant support from its international partners, especially the United States, will remain engaged in complex urban operations, in particular inside the old city in western Mosul.

“Yet, in the rather short foreseeable future, the liberation operations in Iraq are coming to an end – the days of the so-called ISIL in Iraq are counted,” added Mr. Kubiš, who is also the head of the UN Assistance Mission for Iraq (UNAMI).

According to an advance summary of the 2017 Humanitarian Response Plan submitted by relief aid partners in December, at least $985 million is required this year to reach the 5.8 million most vulnerable Iraqis. Of this, $331 million is being sought specifically for the Mosul response.

Already a lot is being done. Over 1.4 million displaced Iraqis have returned to their homes, including one million in the past 12 months.

In the post-Da’esh period, Iraq will need continuous, substantial and sustainable support and assistance from the international community, including its regional partners, he stressed, warning that any abrupt scaling-down of engagement or support would mean repeating mistakes of the past – mistakes that have had grave consequences for stability and security, well beyond the borders of Iraq, even globally.

The protection of civilians, the avoidance of steps that could incite sectarian tensions, and the prevention of looting and revenge attacks in Mosul and other liberated areas of the country “constitute first steps in the process of national and community-based reconciliation, in building a new and truly unified Iraq,” he said.

Since 2003, Iraq has lost more than half of its ethnic and religious minority population. Special attention should therefore be paid to arrangements that address the specific security and other concerns of minorities to enable returns to their homes.

The National Alliance Initiative, submitted to UNAMI by the largest parliamentarian bloc, on the way forward in post-Da’esh Iraq is a good starting point in the Iraqi-owned and led, but UN-facilitated, process of national settlement and reconciliation, he said.

UNAMI is currently working with various groups, including the Sunni and Turkmen components, Kurdistan region of Iraq, civil society, minority communities, tribal leaders, and youth and women groups with the aim of soliciting their views and vision on how to build a post-ISIL united Iraq, based on the principles of equality and citizenship.

He emphasized that “for national reconciliation to succeed, it must be supported by grassroots initiatives.”