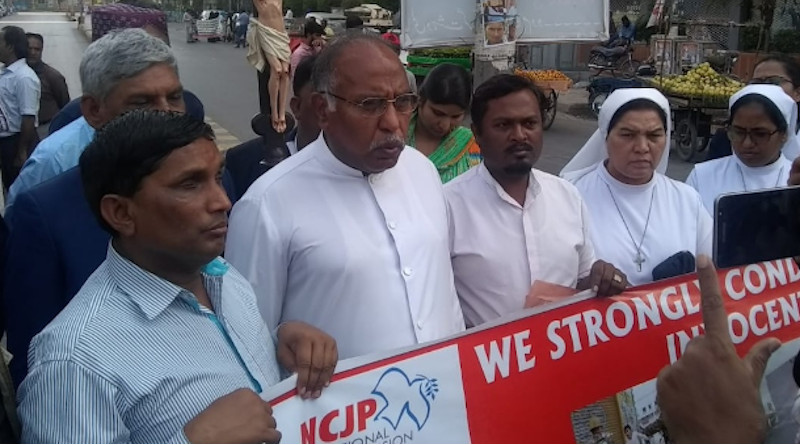 Members of the Catholic Church's National Commission for Justice and Peace attend a peace rally in Karachi city on March 1 in the wake of anti-Muslim riots in India. (Photo: Kashif Anthony Javeed)

Church leaders in Pakistan have appealed to the Indian government to ensure the safety of minority Muslims as they held a peace program in the wake of last week’s anti-Muslim riots in New Delhi.

At least 42 people, mostly Muslims, were killed and 250 injured when mobs of Hindus attacked Muslim areas in the northwest part of New Delhi in the three-day riot that began on Feb. 23.

“The Indian government must take immediate action to ensure the safety of all of its citizens, regardless of faith,” Cardinal Joseph Coutts, archbishop of Karachi, said at the peace program in Karachi on March 1.

Police and the administration were accused of complacency when men armed with bricks, iron rods and wooden sticks attacked Muslims on the streets and set fire to Muslim homes, vehicles and shops.

“We are concerned over the incidents taking place in New Delhi,” said Cardinal Coutts, the only cardinal in the Muslim-majority nation, while attending the program organized by the Catholic Church’s National Commission for Justice and Peace (NCJP).

Religious leaders and civil rights groups gathered in Karachi Press Club as part of the program and later held a peaceful march through the port city holding a banner and a crucifix.

Father Saleh Diego, vicar general of Karachi and archdiocesan director of the NCJP, urged Christians in Pakistan to “fast and pray” on March 6 for peace in India.

Tension has been simmering in India since Dec. 11 after the federal government amended a law to grant citizenship to migrants to India from Afghanistan, Pakistan and Bangladesh. The law, however, excluded Muslims from the provision, triggering protests.

The riot began when a group of Hindus who supported the amendment attacked a group of people, mostly Muslims, who were demonstrating on a public road in Delhi.

Secularists and church groups also oppose the law, saying it not only discriminates against Muslims but also violates the secular principles of the Indian constitution. They also accuse the government of the pro-Hindu BJP party of trying to turn India into a Hindu-only nation with such policies.

“India’s international reputation has taken a beating after it unleashed a reign of terror on its Muslim minority population,” he said.

Lawyer Yunus Khan, president of the minority wing of Jamiat-e-Islami, an Islamist political party in Pakistan, thanked the Catholic Church for its initiatives.

Cardinal Coutts, in a statement, appreciated Sikhs and Christians in New Delhi opening their gurdwaras and churches to riot-affected families. He noted that even some Hindu families sheltered Muslims.

Anti-Muslim riots in India often have a spillover effect on Hindus in Muslim-majority Pakistan.

“Be aware! Our minorities are equal citizens of this country,” Imran Khan tweeted.

Father Diego said Khan’s statement “strengthened not only Hindus but also all the minorities in Pakistan.”

Hindu-Muslim violence has been part of subcontinental history as Hindus consider Muslims as descendants of those who invaded their land, looted and attacked their people since the 11th century.

The hostility between the communities resulted in the partition of British India as Pakistan and India in 1947.

Hindu-Muslim riots continued in India, which has some 180 million Muslims among its 1.2 billion people, 80 percent of them Hindus.

In contrast, Hindus form only 8 million or just 4 percent of some 200 million people in Pakistan, where Muslims constitute some 95 percent.

In both countries, Christians are a tiny minority — they form hardly 3 percent or 27 million people in India and number just 2 percent or four million in Pakistan.