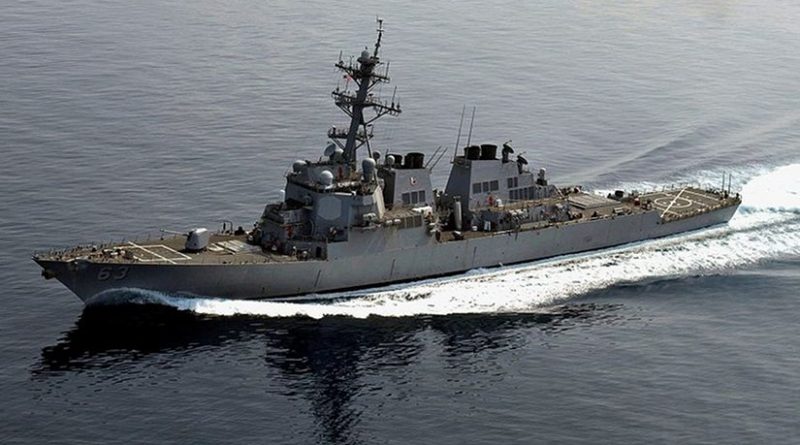 China has sent military vessels and warplanes to “warn off” USS Stethem, a guided-missile destroyer, that sailed near a disputed island in the South China Sea, according to Chinese Foreign Ministry spokesperson Lu Kang.

“Under the pretext of ‘freedom of navigation,’ the US side once again sent a military vessel into China’s territorial waters off the Xisha Islands without China’s approval,” the spokesperson said in a statement, adding that such US behavior “violated Chinese law and relevant international law, infringed upon China’s sovereignty, and disrupted the peace, security and order of the relevant waters.”

“China dispatched military vessels and fighter planes in response to warn off the US vessel,” the statement reads.

“The Chinese side is dissatisfied with, and opposed to, the relevant behavior of the US side,” Lu added, saying that the US is “deliberately stirring up troubles in the South China Sea, as well as running in the opposite direction from countries in the region who aspire for stability, cooperation and development.”

The US Navy did not officially confirm the operation. The US Pacific Fleet spokesman, Lt. Cmdr. Matt Knight, told Fox News that the fleet conducts “routine and regular FONOPs, as we have done in the past and will continue to do in the future,” without specifically mentioning the Sunday incident.

However, an unidentified US Defense Department official earlier told Reuters that the US Navy destroyer USS Stethem came within 12 nautical miles of Triton Island, which is a part of the Paracel Islands located in the South China Sea between China and Vietnam.

The head of US Pacific Command, Admiral Harry Harris, recently criticized China’s activity in the region. “China is using its military and economic power to erode the rules-based international order,” he said in a speech delivered on Wednesday in Brisbane during the joint US-Australian military exercises.

“Fake islands should not be believed by real people,” he added, as reported by Fox News.

The Center for Strategic and International Studies, a Washington-based think tank, said in its recent report that “Beijing has undertaken substantial upgrades of its military infrastructure in the Paracels” and particularly started building new facilities on Triton Island.

It was the second such operation conducted by the US during Donald Trump’s presidency. On May 24, the US Navy guided-missile destroyer, the USS Dewey, came within 12 miles of the Mischief Reef in the Spratly Islands – another disputed archipelago that lies in the southern part of the South China Sea.

At that time, the Chinese Defense Ministry also sent two frigates to “warn off” the US vessel and said that it was “firmly opposed to the US behavior of showing force and boosting regional militarization.”