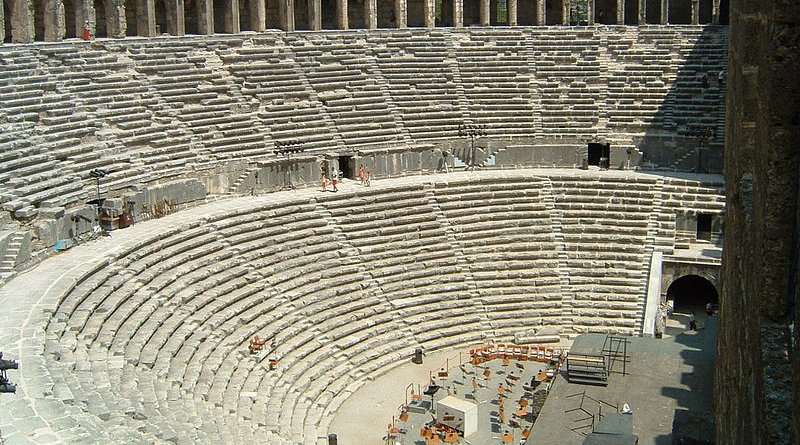 German Chancellor Angela Merkel attends the Bayreuth opera festival in Germany every year during the summer months –This year she also participated, and she wore the dress she bought on her trip to the United States 20 years ago. Wagner stipulated that some of his operas should be staged only at Bayreuth for at least 100-years. Anyway, Wagner operas are now being played everywhere.

We have a similar atmosphere at the Aspendos festival. The 26th International Aspendos Opera and Ballet Festival started with the opera “Carmen” where the production was staged at the Aspendos Antique Theater. The Antalya State Orchestra was led by conductor Zdravko Lazarov.

The Antalya state symphony orchestra has between 60-80 artists, among them foreign brides settled in Antalya, Russian women, married to Azerbaijani men.

The Istanbul ballet performed great dances in orchestral music parts without human voice like overture, as such so we wondered if we had come to a ballet instead of an opera. That said, the Istanbul opera choir and soloists, as well as costume designs, were great.

At the Aspendos festival the program was unclear until the last month. It was very difficult to arrange a place in advance. Our program in the eastern geography is always so loose. In the ancient theater of the 2nd century AD with an audience capacity of 15 thousand, the viewers were primarily western tourists coming by bus from nearby hotels, and there were only a few local people.

Stone seating places had comfortable sponge cushions as advertised. If I prepared the program, I would put Tosca, LaTraviata, Mozart, Wagner Tannhouser alıng with Carmen — a similar opera ballet environment does not exist elsewhere in the country. There are other festivals in Bodrum, TurgutReis, Ephesus, but Aspendos is unique.

The young girls who worked at the buffet watched with enthusiasm on the side, but it seemed that probably most of the young people showed little interest.

Carmen’s main subject is a woman’s murder, the crazy lover Don Jose who committed the murder, told the story to the writer while he waited for the day he would be executed in the Spanish city of Seville in 1838.

Today’s directors added interesting new interpretations to the stage. Don Jose, a desperate lover of Berlin’s komischeoper modern interpretation, strangles Carmen with his yellow wig, then commits suicide, and it turns out that in new modern interpretation, and in the last act, Carmen kills Don Jose with a knife or pistol as self-defense, because Carmen is a brave female character, and the libretto allows this contrary end.