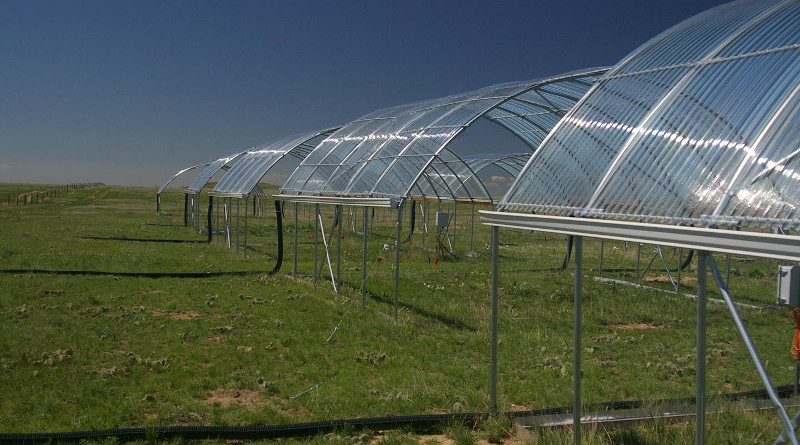 Almost 100 years ago, there was a strange, slow-motion takeover of the Great Plains. During the Dust Bowl of the 1930s, as a historic heatwave and drought swept the middle of the United States, there was a dramatic shift in the types of plants occupying the region.

Grasses more common in the cooler north began taking over the unusually hot and dry southern plains states that were usually occupied by other native grasses.

At the time, of course, this shift in plant cover was not the top concern during a disaster that displaced some 2.5 million people and caused at least $1.9 billion in agricultural losses alone. And, in fact, it didn’t seem all that strange – until scientists started learning more about these types of plants.

“What happened only became a mystery much later, based on our subsequent understanding of the traits of the species that replaced each other,” said Alan Knapp, a University Distinguished Professor in Colorado State University’s Department of Biology in the College of Natural Sciences and the senior ecologist for CSU’s Graduate Degree Program in Ecology.

During the 1960s, researchers found that there was a distinct ecological difference between these two types of what were thought of as warmer- and cooler-climate grasses (one group, known as “C4” use photosynthesis to produce a compound with four carbon atoms, compared to the other, known as “C3,” whose first photosynthesis compound is composed of just three carbon atoms). The C4 grasses grow best in warm temperatures and are more efficient at using water. The C3 grasses tend to be most abundant in cooler and wetter climates.

Which raised the question: Why, during an infamous drought and heatwave, would C3 grasses suddenly invade some 135,000 square miles of the south-central U.S. Thus was born the “Dust Bowl paradox.”

This is not just a matter of historical curiosity. As climate change accelerates, grasslands, which cover some 30% to 40% of the globe’s land surface, are already seeing rising temperatures and extreme variations in rainfall and are expected to experience even more extreme droughts. And, noted Knapp, “they are a vital part of the local economies wherever they occur.” So, understanding what precipitated the Dust Bowl’s sudden shift in grass species – and their knock-on effects – is an increasingly pressing question.

“Because such extreme droughts are predicted to be more common in the future with climate change, it’s important to understand why these grasslands responded the way they did, which was exactly the opposite that one would predict based on their traits,” Knapp said.

Now, Knapp and his colleagues have found an answer to this question. In a new paper, published this week in Proceedings of the National Academy of Sciences, they describe a four-year artificial drought experiment carried out in Kansas and Wyoming grasslands that offers a solution to the mystery of the Dust Bowl paradox.

“This study unlocks a puzzle about why C3 grasses can outcompete C4 grasses in hot, dry conditions,” said coauthor Yiqi Luo of the Center for Ecosystem Science and Society at Northern Arizona University. “As the global climate shifts and precipitation patterns change, this new lens is an important tool to predict future vegetation dynamics and carbon storage.”

This gets us back to the mystery. Why would these cool-loving, less-water-efficient C3 grasses have come to dominate the central U.S. during a historic heatwave and drought? Knapp and his colleagues discovered that it had less to do with the amount of precipitation and much more to do with when that precipitation falls.

During a normal growing year in the southern U.S. plains, the bulk of the moisture falls in the summer, during the growing season. But in the northern grasslands, precipitation patterns are more even throughout the year. It turns out that this is also what happens during extreme drought – precipitation is much less tied to the warm months, occurring more evenly through the year.

So, with precipitation falling in patterns more like the northern plains during a drought in the south, C3 grasses found the bounds of their preferred rainfall dynamics extending southward. And they proliferated.

The researchers also found that the encroachment of C3 plants has a sort of self-fueling power. Because they start growing earlier in the year, “they can preemptively use soil water before C4 plants become active, further reducing the growth of C4 species,” Knapp said.

These results are not simply a question of counting and tracking species. The different types of grasses also have different characteristics that can lead to changes in the overall ecosystem, climate, and land use.

For example, C3 grasses tend to green up an average of a full month before C4 grasses but die back sooner, shifting the region’s soil-air carbon exchange. Being less efficient with water, C3 grasses suck up more moisture from the soil, which has a compounding effect, particularly during years when water is already scarce.

The time of year they grow matters too.

“All plants, when actively growing and green, evaporate substantial amounts of water from their leaves,” Knapp explained. “This has a local cooling effect. Because C3 grasses grow when it is cool (in the spring) but not in the middle of the summer, the cooling effect is lost when it is needed most – during the hot summer months. This means that the shift from C4 to C3 growth patterns could result in hotter summers.”

The team plans to continue studying the impacts of these seasonal changes – and recovery from them.

“After the decade-long Dust Bowl drought, remnants of the drought’s impact on the plant communities were evident for 20 years,” Knapp said. So the group is now monitoring how long it will take their experimental plots to recover after their four-year experiment.

“As such a globally extensive system, grasslands play a large role in the global carbon cycle and vegetation-atmospheric interactions,” Knapp said, which is why understanding such large-scale historical events will be critical in preparing for climate changes of the future.