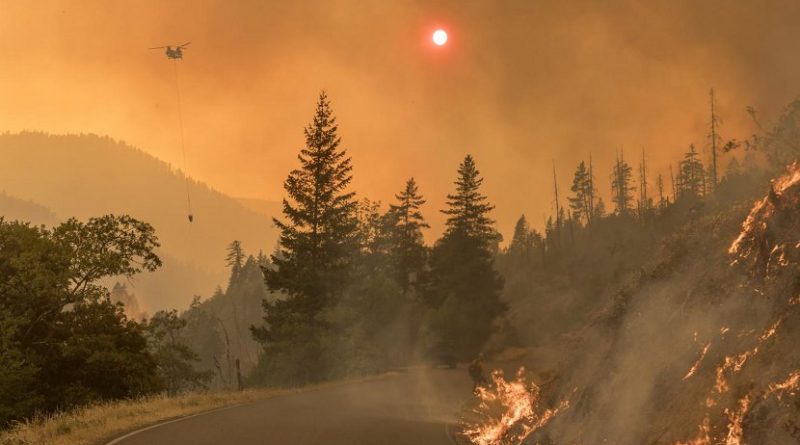 When Hurricane Katrina slammed New Orleans in 2005, the city’s black residents were disproportionately affected. Their neighborhoods were located in the low-lying, less-protected areas of the city, and many people lacked the resources to evacuate safely. Similar patterns have played out during hurricanes and tropical storms ever since.

Massive wildfires, which may be getting more intense due to climate change and a long history of fire-suppression policies, also have strikingly unequal effects on minority communities, a new study shows.

Researchers at the University of Washington and The Nature Conservancy used census data to develop a “vulnerability index” to assess wildfire risk in communities across the U.S. Their results, appearing Nov. 2 in the journal PLOS ONE, show that racial and ethnic minorities face greater vulnerability to wildfires compared with primarily white communities. In particular, Native Americans are six times more likely than other groups to live in areas most prone to wildfires.

“A general perception is that communities most affected by wildfires are affluent people living in rural and suburban communities near forested areas,” said lead author Ian Davies, a graduate student in the UW School of Environmental and Forest Sciences. “But there are actually millions of people who live in areas that have a high wildfire potential and are very poor, or don’t have access to vehicles or other resources, which makes it difficult to adapt or recover from a wildfire disaster.”

This study is one of the first to integrate both the physical risk of wildfire with the social and economic resilience of communities to see which areas across the country are most vulnerable to large wildfires. The approach takes 13 socioeconomic measures from the U.S. census — including income, housing type, English fluency and health — for more than 71,000 census tracts across the country and overlays them with wildfire potential based on weather, historical fire activity and burnable fuels on the landscape.

There aren’t many studies looking at the societal impacts of massive wildfires, so the researchers relied on existing literature that examined other environmental disasters, mainly hurricanes, to identify socioeconomic factors that contributed to whether a person recovered from a disaster. Some of these factors include whether a person is above or below the poverty line, has a disability, is elderly, has a vehicle, and owns or rents their home.

All of these factors and additional data went into creating a vulnerability index that the research team used in combination with U.S. Forest Service assessments of wildfire potential to determine the vulnerability of 71,901 census tracts across the country.

“The argument that we and other scientists have made is natural disasters aren’t completely natural — they are products of both an environmental impact and the social, political and economic context in which the impact occurs,” Davies said.

Overall, more than 29 million Americans — many of whom are white and economically secure — live with significant potential for extreme wildfires. However, within that segment, about 12 million people are considered “socially vulnerable” to wildfires based on the socioeconomic factors assessed in this study — and for whom a wildfire could be devastating.

Additionally, they found that wildfire vulnerability is spread unequally across race and ethnicity. Communities that are mostly black, Hispanic or Native American experience 50 percent greater vulnerability to wildfires compared with other communities.

In the case of Native Americans, historical forced relocation onto reservations — mostly rural, remote areas that are more prone to wildfires — combined with greater levels of vulnerability due to socioeconomic barriers make it especially hard for these communities to recover after a large wildfire.

“Our findings help dispel some myths surrounding wildfires — in particular, that avoiding disaster is simply a matter of eliminating fuels and reducing fire hazards, or that wildfire risk is constrained to rural, white communities,” said senior author Phil Levin, a UW professor in environmental and forest sciences and lead scientist at The Nature Conservancy in Washington. “We can see that the impacts of recent fires were exacerbated for low-income residents facing a shortage of affordable housing, for example, and for Hispanic residents for whom English is not their first language.”

As the researchers dug into their results, they corroborated their findings with news reports from specific wildfire events. For example, they found that in the 2017 wildfire season, emergency agencies in cities throughout California struggled to release timely and correct bilingual information. During the 2014 wildfires in eastern and central Washington, language barriers also prevented Hispanic farm workers from receiving evacuation alerts from authorities, and the only Spanish-language radio station in the area reportedly never received the emergency notification.

The researchers hope these broad, nationwide results will spawn more detailed studies focused on individual communities and their wildfire risk. But equally important, they say, is for organizations and municipalities to take these socioeconomic factors into account when helping their communities prepare for wildfires. Offering cost-share programs for residents to prepare their homes for wildfires, distributing evacuation notices in multiple languages and creating jobs focused on thinning local forests or clearing out flammable brush are all ways in which communities can reduce their vulnerability to wildfires, they said.

“I think the question is, how do we take these sorts of activities that are ultimately about building community and make it so they are attractive and useful for people who are busy and would much rather use what spare time they have to spend with their families?” Levin said. “I think ultimately it’s about connections, building relationships and breaking down cultural barriers that will bring us to a better outcome.”