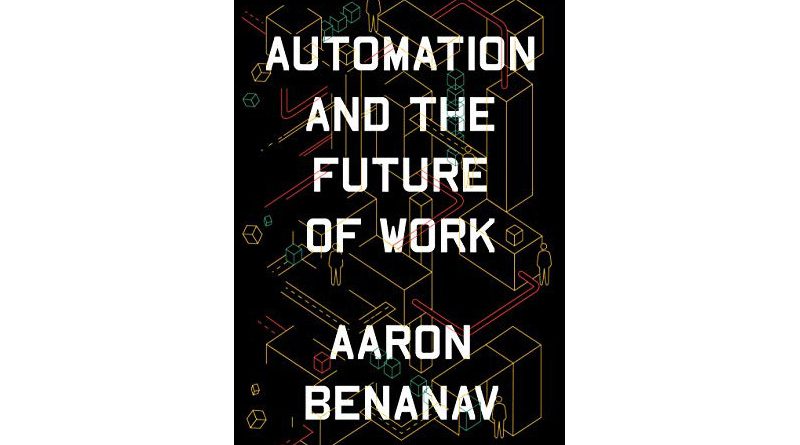 “Automation and the Future of Work” by Aaron Benanav

Automation has been a buzzword on the tips of many thinker’s tongues for a while now.  The media, Silicon Valley and, most earnestly, Andrew Yang have been warning of an impending crisis of robot-fueled unemployment with increasing alarm.  Aaron Benanav has contributed an unorthodox take on this issue in “Automation and the Future of Work”.

Instead of “Automation and the Future of Work”, I think the book should have been called, “Dreaming of Full Automation and The Present Decline of Work”.  Benanav points out that global employment has been stagnating since the 1970s.  The main driver of this malaise, as it turns out, hasn’t been technological innovation (except in agriculture).  Labor has been hardest hit in the manufacturing sector.  This “deindustrialization phenomenon” has ravaged the economies of most developed nations.  Culpability for this lies mostly due to decades of stagnant productivity.  This is the opposite of the automation doomsday cultists’ assertion that exponential productivity from ever-more cutting-edge machinery has been to blame.  The author points out, “In the context of intense global competition, high degrees of robot-ization translate into international competitive advantages, helping firms win larger shares of world markets for the goods they produce. Unlike workers in the US, workers in European and East Asian firms believe that automation helps preserve their jobs.”  Likewise, many labor-intensive tasks, such as sewing and construction, are unlikely to be robot-icized anytime soon, due to the fact that robots lack skills like dexterity and common sense that we take for granted.  The most cutting-edge cyborgs struggle to even walk up a flight of stairs, let alone crochet baby socks or install piping in a muddy ditch.

Most of the victims of deindustrialization who didn’t give up on the job market entirely (a sizable number did) jumped into the service sector.  Benanav explains that, “[The service sector] accounts for between 70-80% of total employment in high-income countries… Services generally do not exhibit dynamic patterns of expansion, with output growing faster than productivity, which in turn grows faster than employment.  Instead, most output growth in services is generated by expanding employment.”  The facts that this has led to a surplus of workers and that the service sector is strongly tied to consumer confidence have created a large class of the precariat, who suffer from poor benefits, job stability and pay.  This exacerbates the impact that deindustrialized created in terms of worker immiseration.  The world economy is becoming increasingly more dependent upon consumer debt than consumer prosperity in order to keep running.

In the penultimate chapter, the book explores two possible solutions for the looming unemployment crisis that are commonly cited: UBI and Keynesian stimulus.  The final chapter outlines a possible post-scarcity utopia that doesn’t rely solely on the deus ex machina of automation.  Benanav cites bits of non-materialist philosophy from Plato to Captain Picard, in an effort to explain how society can move away from the pull of a paycheck to the pull of classical ideals like altruism and creativity.

As I joked about before, “Automation and the Future of Work” is less concerned with automation than with pointing out that basic economic policies have posed far more of a problem to the global working class.  The book spends much of its duration going into the depth of long-term trends in output and productivity that have been grossly misunderstood and misrepresented.  You can’t solve a problem if you don’t properly understand it.  As such, current attempts to solve the problem have thus far sputtered out.  Corporations have failed to see a reason to invest in consistently creating non-service sector jobs. Job training/creation programs in Sweden in Denmark, which both dedicated 1% of their GDPs to the initiative, likewise failed to meaningfully increase job growth.  Benanav’s proposed solutions are thought-provoking, though they would require a complete shift in terms of behavior and economic structures.  At just 99 pages long, the book packs quite a punch of macroeconomics and practical philosophy.

Home » ‘Automation And The Future Of Work’ – Book Review