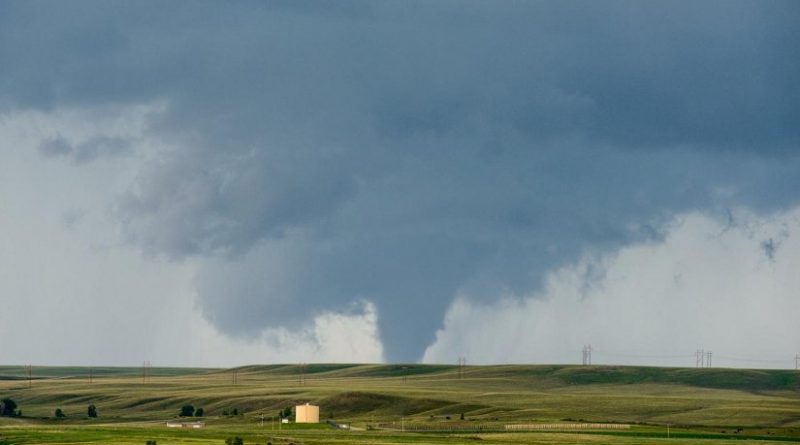 This is a tornado near Elk Mountain, west of Laramie Wyoming on the 15th of June, 2015. The tornado passed over mostly rural areas of the county, lasting over 20 minutes. Credit: John Allen/Central Michigan University

Last spring a research team led by Michael Tippett, associate professor of applied physics and applied mathematics at Columbia Engineering, published a study showing that the average number of tornadoes during outbreaks–large-scale weather events that can last one to three days and span huge regions–has risen since 1954. But they were not sure why.

In a new paper, published December 1 in Science via First Release, the researchers looked at increasing trends in the severity of tornado outbreaks where they measured severity by the number of tornadoes per outbreak. They found that these trends are increasing fastest for the most extreme outbreaks. While they saw changes in meteorological quantities that are consistent with these upward trends, the meteorological trends were not the ones expected under climate change.

“This study raises new questions about what climate change will do to severe thunderstorms and what is responsible for recent trends,” said Tippett, who is also a member of the Data Science Institute and the Columbia Initiative on Extreme Weather and Climate. “The fact that we don’t see the presently understood meteorological signature of global warming in changing outbreak statistics leaves two possibilities: either the recent increases are not due to a warming climate, or a warming climate has implications for tornado activity that we don’t understand. This is an unexpected finding.”

The researchers used two NOAA datasets, one containing tornado reports and the other observation-based estimates of meteorological quantities associated with tornado outbreaks.

“Other researchers have focused on tornado reports without considering the meteorological environments,” noted Chiara Lepore, associate research scientist at the Lamont-Doherty Earth Observatory, who is a coauthor of the paper. “The meteorological data provide an independent check on the tornado reports and let us check for what would be expected under climate change.”

U.S. tornado activity in recent decades has been drawing the attention of scientists. While no significant trends have been found in either the annual number of reliably reported tornadoes or of outbreaks, recent studies indicate increased variability in large normalized economic and insured losses from U.S. thunderstorms, increases in the annual number of days on which many tornadoes occur, and increases in the annual mean and variance of the number of tornadoes per outbreak.

In the current study, the researchers used extreme value analysis and found that the frequency of U.S. outbreaks with many tornadoes is increasing, and is increasing faster for more extreme outbreaks. They modeled this behavior using extreme value distributions with parameters that vary to match the trends in the data.

Extreme meteorological environments associated with severe thunderstorms showed consistent upward trends, but the trends did not resemble those currently expected to result from global warming. They looked at two factors: convective available potential energy (CAPE) and a measure of vertical wind shear, storm relative helicity. Modeling studies have projected that CAPE will increase in a warmer climate leading to more frequent environments favorable to severe thunderstorms in the U.S. However, they found that the meteorological trends were not due to increasing CAPE but instead due to trends in storm relative helicity, which has not been projected to increase under climate change.

“Tornadoes blow people away, and their houses and cars and a lot else,” said Joel Cohen, coauthor of the paper and director of the Laboratory of Populations, which is based jointly at Rockefeller University and Columbia’s Earth Institute. “We’ve used new statistical tools that haven’t been used before to put tornadoes under the microscope. The findings are surprising. We found that, over the last half century or so, the more extreme the tornado outbreaks, the faster the numbers of such extreme outbreaks have been increasing. What’s pushing this rise in extreme outbreaks is far from obvious in the present state of climate science. Viewing the thousands of tornadoes that have been reliably recorded in the U.S. over the past half century or so as a population has permitted us to ask new questions and discover new, important changes in outbreaks of these tornadoes.”

Added Harold Brooks, senior scientist at NOAA’s National Severe Storms Laboratory, who was not involved with this project, “The study is important because it addresses one of the hypotheses that has been raised to explain the observed change in number of tornadoes in outbreaks. Changes in CAPE can’t explain the change. It seems that changes in shear are more important, but we don’t yet understand why those have happened and if they’re related to global warming.”

Better understanding of how climate affects tornado activity can help to predict tornado activity in the short-term, a month, or even a year in advance, and would be a major aid to insurance and reinsurance companies in assessing the risks posed by outbreaks.

“An assessment of changing tornado outbreak size is highly relevant to the insurance industry,” noted Kelly Hererid, AVP, Senior Research Scientist, Chubb Tempest Re R&D. “Common insurance risk management tools like reinsurance and catastrophe bonds are often structured around storm outbreaks rather than individual tornadoes, so an increasing concentration of tornadoes into larger outbreaks provides a mechanism to change loss potential without necessarily altering the underlying tornado count. This approach provides an expanded view of disaster potential beyond simple changes in event frequency.”

Tippett said that more studies are needed to attribute the observed changes to either global warming or another component of climate variability. The research group plans next to study other aspects of severe thunderstorms such as hail, which causes less intense damage but is important for business (especially insurance and reinsurance) because it affects larger areas and is responsible for substantial losses every year.