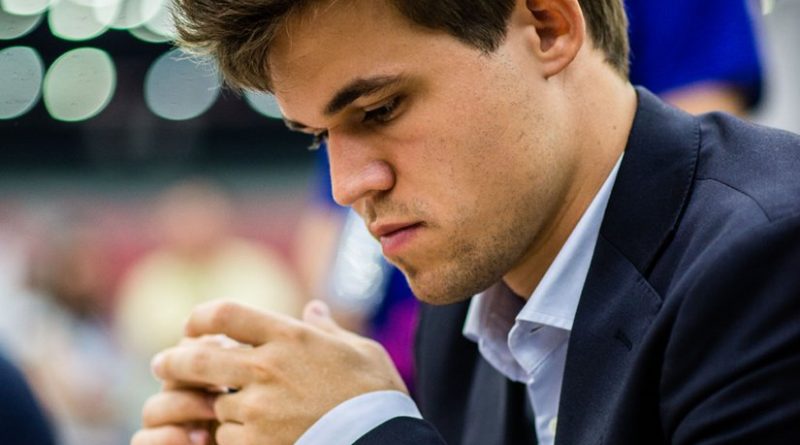 Norwegian Chess maestro Magnus Carlsen has risen to Himalayan heights by extending his dominance over the chess world by winning the World Chess Championship for the third consecutive time in New York on November 30, beating his Russian challenger Sergei Karyakin in a tiebreaker.

Carlsen won the championship — organised by the International Chess Federation, FIDE — in 2013 and 2014, beating Indian origin Spaniard V. Anand. Karyakin, a child prodigy who became the youngest ever chess grandmaster at the age of 12, has known Carlsen for years and had little to lose, with no one even having expected him to reach the final. “Sergei has impressed everyone with his tenacity these last few weeks so he is perfectly capable of pulling an upset,” said Wesley So, who travelled to New York from Minnesota to watch the clash.

World number one Magnus Carlsen has won the world title for the third time after crushing the then world champion Anand in a spectacular manner ‘ not letting him win nay game in the tournament. Anand has not yet called it a day notwithstanding counseling by many of his well wishers, close associates and friends to retire with dignity. He refused and continues to play. Possibly, Carlsen did not fight Karyakin for the title as he had done against Anand who had been a reigning world champion for several years as Israeli player played for mischief in favor of Anand.

Reigning world chess champion Magnus Carlsen of Norway and Russian grandmaster Sergei Karyakin went head-to-head on Friday in the first game of a battle to determine the world’s top player. Carlsen — who has held the title since 2014 — made the opening move, as the first of 12 games got under way in New York. After 42 moves, the game ended in a draw, with the opponents scheduled to meet again on Saturday.

The young stars headed into the chess equivalent of extra time in soccer. Unlike the earlier rounds, which lasted an average of six hours, the rapid-play rules meant the players had just 25 minutes each, so each game was over in an hour. The accelerated games left plenty of opportunity for harried mistakes, and while predictions were difficult, Carlsen — a king of the blitz format and world number-one since 2010 — had remained favorite.

The Norwegian, who turned 26 last week, has played several blitz tournaments this year, beating US grandmaster Hikaru Nakamura in one in October. But he has occasionally shown flashes of losing his cool, as when he slammed the door of the press room after defeat in the eighth round, earning a fine of five percent of his prize money.

Carlsen and Karjakin played in a renovated building on the historic Manhattan waterfront, near Wall Street and the Brooklyn Bridge. The championship has returned to the United States for the first time in 21 years; the last one was in Sochi, Russia, in 2014.

Although Karyakin foiled predictions by tying Carlsen in 12 regular rounds, the Norwegian champion beat him in the final phase of four quick-fire extra games.

The battle for the world chess crown ended up in the dramatic tiebreaker after a win apiece and nine draws.

The win puts Carlsen, who achieved again a well deserved win, closer to the status of chess legends such as Garry Kasparov, who dominated the game for 15 years.

The last Russian to claim the title was Vladimir Kramnik in 2007.In a sign of the final’s significance to Moscow, President Vladimir Putin’s spokesman Dmitry Peskov was in New York to see the start of the head-to-head. Much has been made of the clash as a reprise of the great Cold War chess battles of the 1970s, but Karyakin, who is from Crimea and supported Russia’s 2014 annexation of the peninsula, has played down political overtones.

The tournament has prompted comparisons with the iconic 1972 showdown between American Bobby Fischer and the Soviet Union’s Boris Spassky, two rivals in the Cold War-era whose showdown was dubbed the ‘Match of the Century’.

The two players know each other well; they occasionally chat on Skype, although they kept contact to a minimum in the run-up to the game. Carlsen is the bookmakers’ favorite but Karyakin — who practices at least six hours a day — is seen as having every chance of causing an upset.

While he became the youngest grandmaster in history at just 12-years-old, Karyakin admitted it would be hard to beat Carlsen, who is known for his relentless attacks and confidence under pressure. Trying to wrest the title from Carlsen is the 26-year-old Ukrainian-born Russian grandmaster Sergey Karjakin. The prize purse of $1.1 million will be divided 60-40 between the men, who are treated like rock stars in their countries.

For years, chess seemed to be played in a bubble, far from mainstream media. But it never grew out of style in Carlsen’s Norway, where TV programs were pre-empted for important games. There are an estimated 600 million players worldwide. By contrast with the glitzy, high-tech championship, chess enthusiasts can be found playing in hundreds of New York outdoor public spaces, such as Central Park. Some of these urban street players are homeless.

In the USA, organizers faced a challenge: how to popularize a sedentary sport with little visible action in a society where most fans favour dynamic sports like football, boxing, basketball and baseball. Still, chess has its fervent American fans, including Jay Z, Jude Law, Arnold Schwarzenegger and President Barack Obama.

The International Olympic Committee (IOC) classifies it as a sport, as do more than 100 countries. It requires not only brain acrobatics but also the physical stamina to sit as long as six hours at a time for three weeks. The board battle pits figures of medieval warriors, kings, queens, bishops and knights against each other in ever-changing plots as dramatic as the “Game of Thrones.” Electronic versions of the game register about 1 billion downloads a year of hundreds of apps, says Ilya Merenzon, the Moscow-based chief executive officer of Agon Ltd, which owns the marketing rights to the World Chess brand for the championships and the qualifying games leading up to it.

Karjakin was 12 when he became the youngest grandmaster, and Carlsen was a grandmaster at 13. “When I was young, I was used to winning games in a very aggressive style, and I would attack all the time and I was used to my opponents cracking,” Carlsen said. “But when I got to the highest level, then people defended better, so now I’m more pragmatic. Whatever risks I take, I try to control the game.”

Carlsen has cashed in through sponsorships, his own chess app and modeling for ads. He appeared in G-Star Raw’s Spring/Summer fashion ad campaign along with actress and model Lily Cole. He also was selected by Cosmopolitan magazine as one of the sexiest men of 2013. Since then, he’s also been the world’s No 1 player.

All costly 600 seats for inaugural game were sold out, starting at $75 apiece. Two games were played on consecutive days, followed by a one-day break, for a total of 12 games. Tens of millions of fans followed live online, free of charge through the worldchess.com website and affiliate partners. In addition, $15 via Pay-Per-View buys the game in virtual reality, allowing fans to experience the game as if they were there by wearing special goggles.

New York hosted the first championship with two grandmasters of the Smartphone generation Carlsen and Karyakin — “a battle of two of the finest minds on the planet. The goal was to make chess a pop culture event.

The world championship battle is billed as the youngest ever in terms of the players’ cumulative ages: Carlsen is 25 and Karyakin is 26. It is also the first between players who came of age in the computer era, representing a generational shift in the game.

In another first, the world championship was broadcast from its trendy Manhattan venue using virtual reality.

The defending world champion is a 25-year-old Norwegian who’s been named one of the world’s sexiest men. Magnus Carlsen is tops in an endurance sport that doesn’t require him to move from his chair. It’s called chess.

At a news conference in New York, Karyakin said he had come to bring the crown back to Russia, calling this “the dream of my life”, Russian news agencies reported. “We are here to put up a fight,” he said.

Carlsen, the highest-rated player in chess history, again aims to win the World Chess Championship, the most eagerly awaited match in a generation, starting Friday in New York.

This match comes as Moscow and Washington’s relations have plunged to their lowest point since the Cold War due to disagreements on Syria and Ukraine.

The Russian president of the World Chess Federation (FIDE) Kirsan Ilyumzhinov is unable to attend the championship after being denied a visa, possibly because he has been on a US Treasury blacklist since 2015 over financial ties to the Syrian government.

“This is the first time in the history of the world championships that the (FIDE) president is not at the match,” Ilyumzhinov told journalists in Moscow on Thursday.

Carlsen has been called the ‘Mozart of Chess’, and has inspired wide interest in the game in Norway since first winning the world title in 2013. He has picked up endorsements and deals that earn him some $2 million a year. He has a huge fan following, has done modelling and even launched his own app called Play Magnus.

Karyakin, currently ranked ninth in the world, was born on Ukraine’s Black Sea peninsula of Crimea, annexed by Moscow in 2014. He struggled with finding sponsors before moving to Russia in 2009 and becoming a citizen.

The two players split the $1.1-million (one million Euros) prize, with the winner getting three-fifths of the purse and the loser taking home the rest. The competition initially offered prize money of 600,000 Euros ($637,000) for the winner, and 400,000 euros for the losers, but that was changed to 550,000 and 450,000 Euros respectively because the battle went into extra time.