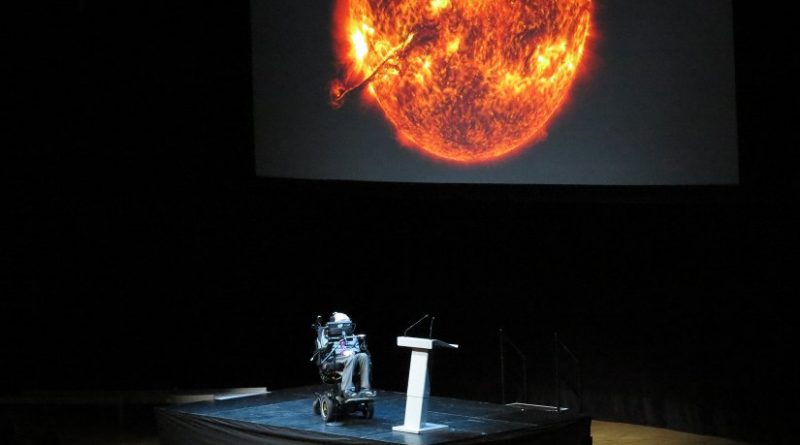 Stephen Hawking’s visit to the Vatican this week has raised curiosity, with some asking what exactly the famed astrophysicist and self-proclaimed atheist was doing in the heart of the Catholic Church.

But for the Vatican, his visit was nothing out of the ordinary. Hawking is a member of the Pontifical Academy of Sciences – which includes 80 of the most brilliant scientists in the world – and he was in Vatican City for the group’s annual meeting.

This year’s conference was focused on “Science and Sustainability.” Hawking himself gave a talk on “The Origin of the Universe,” the topic that has earned him world renown.

Religious belief – Catholic or otherwise – is not a criterion for membership in the Pontifical Academy. The group’s president, Werner Arber, a former Nobel Prize Laureate in Medicine, is a Protestant. And members of the Academy are Catholics, atheists, Protestants and members of other religions.

This open membership policy exists because the Pontifical Academy is conceived as a place where science and faith can meet and discuss. It is not a confessional forum, but a place where it is possible to have an open discussion and examine future scientific developments.

The Academy was founded back in 1603 by Prince Federico Cesi with Pope Clement VII’s blessing, and its first leader was Galileo Galilei. When Prince Cesi died, the Academy was shut down. Pius IX refounded it in 1847, but the Academy was then embodied in the Kingdom of Italy after the fall of the Pontifical State. In 1936, Pius XI founded the Academy once more, giving it the current name and a statute that Paul VI updated in 1976 and St. John Paul II updated once more in 1986.

Scrolling through the lists of the members of the Academy over the course of the years, one can find many Nobel Prize Laureates, some of them already part of the Pontifical Academy when they won the Prize, some who became laureates after their membership to the Academy.

Among the Nobel Prize Laureates who were part of the Pontifical Academic are Niels Bohr, Rita Levi Montalcini, Werner Heisenberg, Alexander Fleming, and Carlo Rubbia.

For academy chancellor Archbishop Marcelo Sanchez Sorondo, the period of the 1930s was one of “the most exciting of the Academy.”

One of the members during that time was Max Planck, Nobel Prize Laureate for Physics in 1918 and initiator of the studies on quantum physics. It was Max Planck who warned Pius XII about the possible consequences of nuclear war.

Planck’s warnings inspired some of Pius XII’s magisterium. Speaking in front of the Pontifical Academy for Science Nov. 30, 1941, the Pope said that “war is lacerating the world and is employing all available technological resources to destroy it.” The Pope noted that science can be a double-edged sword in the hands of men, capable of both healing and killing. He mentioned the “incredible venture of men committed in the research on nuclear energy and on nuclear transformations.”

Then, delivering a speech to the same Academy Feb. 21, 1943, Pius XI made an appeal to the Heads of State: “Though we cannot still think to take a technical profit out of that stormy (nuclear) process, this same process paves the way to a series of opportunities, so that the possibility of the construction of a uranium-powered machine cannot be considered a mere utopia.”

The Pope added that “it should be important not to let this process happen, but rather to halt the process with proper chemical means,” because “otherwise a dangerous catastrophe could take place not only in that place, but in the whole planet.”

Meetings of the Pontifical Academy for Science discuss topics on the cutting edge of science. For example, the Pontifical Academy has discussed the “Higgs boson” many times. The elementary particle was finally discovered in 2015, but scientists of the CERN of Geneva anticipated its imminent discovery at a 2011 gathering on subnuclear physics held at Casina Pio IV, the Academy’s headquarters.

In a certain sense, the Academy is a bridge between science, faith and the world. It proves that scientific knowledge does not exclude the presence of God.

“The scientist,” Archbishop Sanchez has said, “discovers things he had not put there. Questioning who placed those things there is a theological question: the scientist just discovers them, the believer sees in them the presence of God.”

The archbishop also recounted that he asked Hawking how he could maintain that God does not exist, if he had reached this conclusion as a scientist or on the basis of his experience of life. And, he said, “Hawking had to recognize that his affirmation had nothing to do with science.”

This is one of just many anecdotes that has arisen from the Academy, giving evidence that the Vatican is not an enemy to science, but a place where debate on scientific progress has long been both encouraged and actively promoted.

During his conference at Casina Pio IV, Stephen Hawking paid homage to Msgr. George Lemaitre, president of the Pontifical Academy of Sciences from 1960 to 1966. Hawking said that Msgr. Lemaitre was the real father of the “Big Bang Theory,” thus dismissing the common belief that the father of the theory was the U.S. naturalized physicist George Gamow.

“Georges Lemaitre was the first who proposed a model according to which the universe had a very dense beginning. He, and not George Gamow, is the father of Big Bang,” Hawking said.

It’s no wonder, then, that Hawking will take part in an academic session on Dec. 2 marking the 50th anniversary of Lemaitre’s death. The event, to be held at the Academy of Belgium in Italy, will be concluded by Cardinal Gerhard Ludwig Mueller, prefect of the Congregation of the Doctrine of the Faith.

Home » Why Famed Atheist Stephen Hawking Is On Pontifical Academy