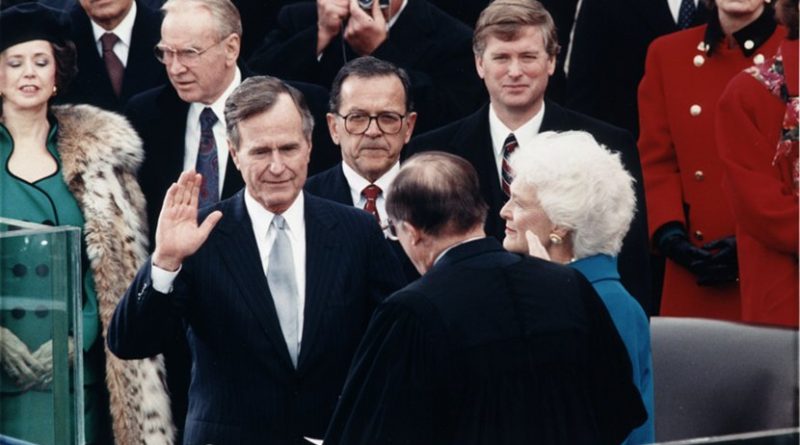 By Srimal Fernando and Pooja Singh*

The sad news on Friday of Former US President George .H. Bush’s death at the age of 94 spread all over the world in no time. His lasting legacy on the US political system and his accomplishments during his presidency from 1989 to 1993 touches nearly everyone. Former President Obama also paid tribute, saying: “America has lost a patriot and humble servant in George Herbert Walker Bush” While our hearts are heavy today, they are also filled with gratitude”.

In 1989 when Vice President Bush assumed power, his foreign Policy strategy was unfamiliar to the world. For the next four years, his administration tried to make the best out of the bad, often impossible task to change the course of United States (US) relations with former Soviet Union (USSR) and Warsaw bloc nations. Apart from diplomatic efforts his Presidency focused on economic diplomacy. The signing the North American Free Trade Agreement (NAFTA) transformed trade ties with the trading bloc. Former President Bush addressing one of his key speeches on trade, in 6 February 1989 e stated, “We don’t want an America that is closed to the world. What we want is a world that is open to America”

Bush senior was a modern American Foreign policy architect credited for ending of the Cold War. Hence looking back it was a moment for celebration and pride when George Bush was chosen as Vice President during Regan’s two-termed presidency. It was apparent as President Bush laid out policy approach of overcoming numerous national security and diplomatic challenges. However, his major foreign policy problems from the start had been the Soviet Union (USSR) and integration of East European nations into the European Union (EU). It took full four years and turned to be as one of the most rigorous consultative processes in the US- USSR relations. In fact, soon after the fall of the Berlin Wall in 1989, the meeting was held between George Bush and Mikhail Gorbachev on the Mediterranean island of Malta. The collaborative diplomacy between the two superpowers with considerable negotiations between Bush and Gorbachev in reducing the nuclear warheads during the Strategic Arms Reduction Treaty (START) -1 and 2 had its cost. Having the Strategic Arms Reduction Treaty (START I) as the prime subject of summit and the arrangement took nine years in taking the real shape. Comparatively START -1 was the main understanding since the marking of the Intermediate-Range Nuclear Forces Treaty by Reagan and Gorbachev in 1987. The idea behind conducting a summit on START is to lessen the percentage of nuclear weapons of both the United States (US) and the USSR by about 35 percent in more than seven years down the line.

During this period, there was intense debate about the meaning and scope of new foreign ties with Commonwealth of Independent States (CIS ) states, East European nations and the expansion of NATO agenda over the former Warsaw led nations. A crucial element in these changing pictures was US’s shift on the status question with former Soviet Union (USSR) nations, after the collapse of the former Soviet Union in 1991.

Unexpected summer of 1990 turned out to be a testing time for his presidency on the Iraqi invasion by Saddam Hussein. The question was much concern and caused debate. Hence, the events in the oil rich Kuwait attracted considerable global attention. On 17 January 1991 early in the morning where the allied forces launched their first attack that included in excess of 4,000 bombings owned by coalition aircrafts and a month later on 24th February a large scale invasion pushed by the allied forces liberated Kuwait. The US led Gulf war and liberation of Kuwait was highly sensitive issue and wreaked Bush’s Presidency. In 1992, President Bush of the Republican Party lost to Bill Clinton of Democratic Party in Presidential elections.

Over the decades after retirement from Presidency, there has been an opposing view on his presidency. In 2011 it was another turning point in US political history where Bush seniors son George. W Bush junior became the 43rd President, which only happened twice after John Adam’s son who also served as US president. During his presidency, Bush senior along with Clinton toured tsunami-hit nations. In 2011 the much-loved peoples President was honored with the Medal of Freedom, the most astounding US non-military personnel respect granted by then President Obama.

It is a powerful reminder of the manifold ways his presidential influence go beyond the scope of America and well beyond the first world nations essentially shaping global foreign policy mandate. When America fell silent on the sad demise of George H. W. Bush, many Americans and the international community might have felt they lost a hero. Yet Bush’s legacy represents the aspirations, the hopes of the American people and the global community. Perhaps these beliefs and values can build a more tolerant and respectful global society in the near future.