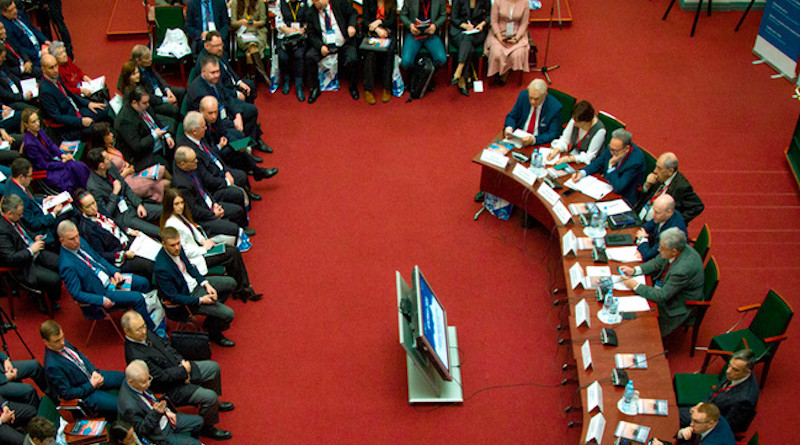 More than 500 people, including specialists from the US, Turkey, Latvia and Estonia, took part in the fifth international conference The Arctic: Offshore Projects and Sustainable Development of Regions, Arctic-2020, which was held at the Chamber of Commerce and Industry of the Russian Federation in Moscow, February 19–20.

The event was organized by System Consulting LLC and the Regional Energy and Energy Saving information and analytical magazine, together with the Chamber of Commerce and Industry of the Russian Federation, Russian State University of Oil and Gas named after I. Gubkin and Moscow Automobile And Road Construction State Technical University with the support of Ministry for the Development of the Russian Far East and Arctic.

The conference participants, including representatives of large Russian and foreign oil and gas producing and service companies, equipment manufacturers, research centers, as well as relevant ministries and departments, discussed topical issues of the Arctic mineral resources potential development, the role of the Arctic in meeting global energy demand, legislative support of offshore projects and problems of transport infrastructure.

In addition, they paid attention to the energy security of the regions of the Far North and the Far East, the creation of decent working conditions and livelihoods in these territories, the digitalization of the EAEU economy, and the use of robotic and unmanned technologies in the Arctic.

The plenary session titled Sustainable Development of the Arctic Regions: Goals and Approaches was opened by Alexander Krutikov, Deputy Minister for the Development of the Russian Far East and Arctic. In his speech devoted to the special economic regime of the Arctic zone of the Russian Federation (AZRF) he stated that new tax benefits for investors in the Arctic will favor the implementation of nine major projects worth 15 trillion rubles.

According to the amendments to the Tax Code of Russia, which the State Duma Committee on Budget and Taxes recommended to adopt in the first reading, any entrepreneur registered in the Arctic and investing at least 10 million rubles in a new project can receive the status of a resident of the Arctic zone. The status means certain tax and non-tax benefits, including optional free customs zones and the 24-hour operation of checkpoints. Moreover, it involves simplified procedure of obtaining land, curtailed inspections, and protection in court.

The set of privileges for mineral companies provides for a reduction of up to 5% in the tax rate on mineral extraction (MET) for a period of 15 years for offshore oil production projects; 0% MET rate for 12 years for the production of liquefied gas and gas chemistry; zero MET for the first 12 years with gradual increase up to full tax rate starting from the 13th and up to the 17th year for new oil provinces in the Eastern Arctic.

At the same time, Alexander Krutikov emphasized the importance of environmental issues in the region, adding that the Ministry for the Development of the Russian Far East and Arctic will prepare a climate change adaptation plan for the Arctic in 2020.

“In accordance with a Government decision, we are to prepare a climate change adaptation plan for the Russian Arctic regions this year. We will not take a formal approach to this. We need to formulate a practical response to these challenges,” Deputy Minister said, adding that the ministry has already started working on a national system to monitor the degradation of permafrost and prevent risks.

In turn, Elena Zlenko, Member of the Federation Council Committee on Agriculture and Food Policy and Environmental Management, Representative of the executive authority of the Yamal-Nenets Autonomous Area, also noted that careful attitude to the fragile nature of the Arctic becomes increasingly important year after year.

In her opinion, the new development strategy of the Russian Arctic will contribute to improving the living standards of the population of the Arctic zone, allowing the development and rational use of the Arctic resource base, while preserving its unique ecosystems.

Close attention, in her opinion, should be given to the development of the social sphere of the region, as evidenced by statistics on the migration outflow of its population and the low purchasing ability of Arctic territories residents.

“The importance of the Arctic for the country’s economy and national security requires strengthening the status of the macroregion in economic and social terms. The main way of increasing incomes and living standards of the population include creating favorable conditions for the industrial development in the Arctic and accelerating the development of the business sector, improving the system of employment income regulation, which should motivate people to live and work in the Arctic, creating a special Arctic system of state guarantees and compensations , as well as the development of social infrastructure in order to improve people’s quality of life,” Elena Zlenko listed.

Meanwhile, Yury Ampilov, Professor of the geological faculty of Lomonosov Moscow State University, Honored Scientist of the Russian Federation, expressed the need for a radical review of the general concept of Russian Arctic development, taking into account the new realities.

“Before the large-scale development of the Russian Arctic in the current market and geopolitical situation, there are many challenges that need to be addressed. One of them is a significant drop in prices for hydrocarbon raw materials in major world markets: in 3–5 times since 2013, and large-scale discovery of new oil and gas fields […] in more favorable climatic zones with low production costs,” the geophysicist explained.

In his opinion, certain difficulties are associated with the escalating struggle for buyers in the context of a relative surplus of raw materials, sectoral sanctions, the high environmental vulnerability of the Arctic nature, as well as the development of renewable energy in countries that are potential consumers of Russian hydrocarbons.

In this regard, the Arctic region needs a comprehensive review of various promising areas that are not related to the extraction of raw materials or minerals, he believes.

“So the development of appropriate domestic technologies and equipment adapted for the Arctic conditions should be a priority task for the Russian engineering corps, which they can handle,” the professor emphasized.

The issue of innovative development ran through a series of discussions held within the framework of the Arctic-2020, becoming the leitmotif of the entire event. Particular attention to this problem was paid by President of the Union of Oil and Gas Producers of Russia Gennady Shmal.

“Today, Russia is not yet ready for the extraction of oil and gas offshore, either technically, economically or environmentally. Of course, we need to engage in exploration, create appropriate infrastructure, but not a single project for oil production on the Arctic shelf in the current conditions will be profitable,” he said, noting the importance of creating new scientific developments in the field of mining.

In his opinion, one of the main problems is the low oil recovery factor in Russia, which is primarily the result of insufficient funding for science and technology.

According to the head of the Russian Union of Oil and Gas Producers, a new paradigm appears in the development of the oil and gas industry: earlier, the emphasis was made on the development of large, highly efficient fields, but today there are no such fields, so you need to use the existing potential of the subsoil to the full, developing small deposits as well. This, according to Gennady Shmal, is possible only with the active state support of small businesses, which could effectively participate in smaller-scale hydrocarbon production projects.

Vikenty Kozlov, Member of the Business Council of the State Commission for Arctic Development, Head of the Working Group of the International Communication Academy on the Arctic, pointed out the need to develop telecommunications infrastructure in the Russian Arctic.

“Having a reliable connection is a prerequisite for ensuring national security. […] The information and telecommunication infrastructure of the Arctic is part of the country’s infrastructure, and its basis should be the fiber-optic communication line (FOCL),” said the ICA academician.

“Only FOCL has sufficient bandwidth, reliability and security, can fulfill the functions of the basic backbone of the unified telecommunication network of the Russian Federation and the transcontinental network,” Vikenty Kozlov said.

According to him, the Russian Arctic is the only area where fiber-optic lines are not being built, however, ideas for creating such a communication line are being worked out.

“It is proposed to lay an underwater cable along the bottom of the Arctic and Pacific Oceans with branches to some settlements in the Russian Federation. […] Subsequently, the Arctic FOCL can be extended to the border with China. In the future, this line will play the role of one of the main channels for the countries of Europe, Asia and North America. Thus, the Arctic FOCL can be considered an integral part of the global transport network to ensure the country’s national security while passing international traffic, and the most important component of the digital economy infrastructure,” said the member of the Business Council of the State Commission for Arctic Development.

“The creation of FOCL in the mainland will connect the settlements of the Arctic zone and the ports of the NSR [Northern Sea Route] with branches to defense and security facilities, oil and gas technological facilities, and will help accelerate the elimination of digital inequality. […] As a result of the creation of the Arctic FOCL, the shortest route will be formed for the transit of intercontinental telecommunication traffic, which will provide attractiveness for investment by the BRICS countries, as well as the integration of the Arctic part of the Russian Federation with the developed Russian regions, and the organization of reliable shipping via the NSR,” Vikenty Kozlov added.

These and other proposals of the Arctic-2020 conference participants voiced at the plenary sessions and round tables were included into a resolution, which will be submitted to the relevant ministries and agencies.
Source: https://penzanews.ru/en/analysis/66568-2020