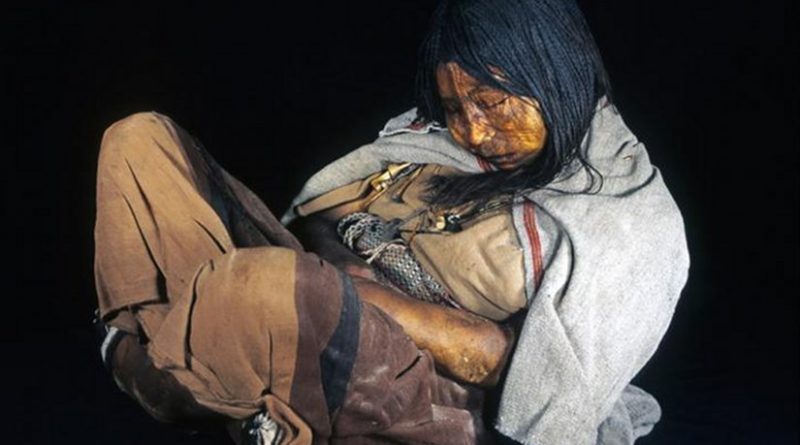 Llull Maiden: DNA of The Doncela (The Maiden) Incan mummy found at Mount Llullaillaco, Argentina, in 1999, was used in the study. Credit: Johan Reinhard

The first largescale study of ancient DNA from early American people has confirmed the devastating impact of European colonization on the Indigenous American populations of the time.

Led by the University of Adelaide’s Australian Centre for Ancient DNA (ACAD), the researchers have reconstructed a genetic history of Indigenous American populations by looking directly into the DNA of 92 pre-Colombian mummies and skeletons, between 500 and 8600 years old.

Published today in Science Advances, the study reveals a striking absence of the pre-Colombian genetic lineages in modern Indigenous Americans; showing extinction of these lineages with the arrival of the Spaniards.

“Surprisingly, none of the genetic lineages we found in almost 100 ancient humans were present, or showed evidence of descendants, in today’s Indigenous populations,” said joint lead author Dr Bastien Llamas, Senior Research Associate with ACAD. “This separation appears to have been established as early as 9000 years ago and was completely unexpected, so we examined many demographic scenarios to try and explain the pattern.”

“The only scenario that fit our observations was that shortly after the initial colonization, populations were established that subsequently stayed geographically isolated from one another, and that a major portion of these populations later became extinct following European contact. This closely matches the historical reports of a major demographic collapse immediately after the Spaniards arrived in the late 1400s.”

The ancient genetic signals also provide a more precise timing of the first people entering the Americas–via the Beringian land bridge that connected Asia and the north-western tip of North America during the last Ice Age.

“Our genetic reconstruction confirms that the first Americans entered around 16,000 years ago via the Pacific coast, skirting around the massive ice sheets that blocked an inland corridor route which only opened much later,” said Professor Alan Cooper, Director of ACAD. “They spread southward remarkably swiftly, reaching southern Chile by 14,600 years ago.”

“Genetic diversity in these early people from Asia was limited by the small founding populations which were isolated on the Beringian land bridge for around 2400 to 9000 years,” said joint lead author Dr Lars Fehren-Schmitz, from UCSC. “It was at the peak of the last Ice Age, when cold deserts and ice sheets blocked human movement, and limited resources would have constrained population size. This long isolation of a small group of people brewed the unique genetic diversity observed in the early Americans.”

Dr Wolfgang Haak, formerly at ACAD and now at the Max Planck Institute for the Science of Human History, said: “Our study is the first real time genetic record of these key questions regarding the timing and process of the peopling of the Americas. To get an even fuller picture, however, we will need a concerted effort to build a comprehensive dataset from the DNA of people alive today and their pre-Columbian ancestors, to further compare ancient and modern diversity.”