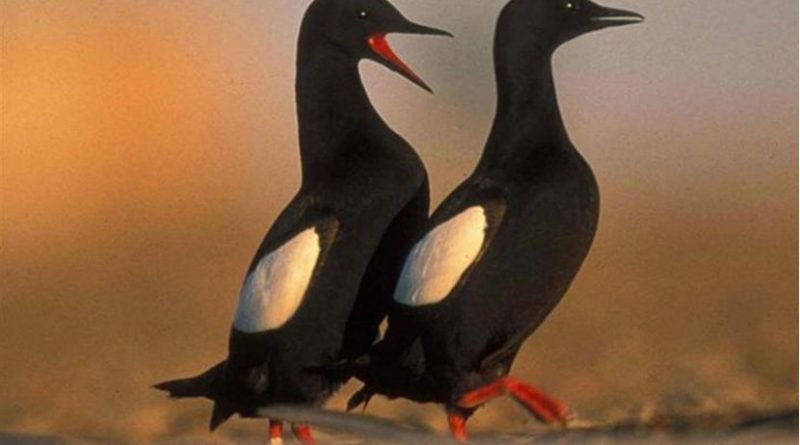 A pair of black guillemots. Credit: Friends of Cooper Island.

On the North Slope of Alaska, snow is melting earlier in the spring and the snow-in date is happening later in the fall, according to a new study by CIRES and NOAA researchers. Atmospheric dynamics and sea ice conditions are behind this lengthening of the snow-free season, the scientists found, and the consequences are far reaching — including birds laying eggs sooner and iced-over rivers flowing earlier.

“The timing of snowmelt and length of the snow-free season significantly impacts weather, the permafrost, and wildlife — in short, the Arctic terrestrial system as a whole,” said Christopher Cox, a scientist with CIRES at the University of Colorado Boulder and NOAA’s Physical Sciences Division in Boulder, Colorado. The study has been accepted for publication in the Bulletin of the American Meteorological Society.

Focusing on the transition seasons on the North Slope — the springtime snowmelt and the autumn onset of snowpack — the researchers found that since the mid-1970s, the spring melt has been happening earlier, and the first snow has been happening later. The end result: an increase in length of the snow-free season, by about one week per decade from 1975 to 2016. From 1975 to 2016, the spring snowmelt has arrived nearly three days earlier every decade, and from 1979-2016, snow onset has arrived later, by about 4.5 days every decade.

CIRES and NOAA researchers and their colleagues analyzed long-term observations of snow cover and meteorology at the NOAA Barrow Atmospheric Baseline Observatory outside of Utqia?vik (formerly Barrow), Alaska, along with other records of environmental variables in the region.

Despite natural swings up and down, a persistent, long-term warming trend emerged: eight of the 10 earliest melt dates have occurred since 1990, pointing to the influence of warming Arctic temperatures. 2016 experienced the earliest melt, the latest onset of snow in autumn, and the longest snow-free season in 115 years of record-keeping — about 45 percent longer than the average over the previous four decades.

The researchers then began dissecting their data to find weather-related factors that might be contributing to these observed changes. They found different factors at work in spring versus fall. Changes in flow patterns of warm Pacific Ocean air from the south were driving earlier spring snowmelt, while decreasing summer sea ice had the greatest influence on later onset of snowpack in the fall.

The researchers found that large-scale features of atmospheric circulation–in particular, the strength and position of the Aleutian Low, a semi-permanent, subpolar area of low pressure located in the Gulf of Alaska near the Aleutian Islands–largely determined the timing of snowmelt during spring in Alaska, by either facilitating or inhibiting the transport of warm, moist air into the region.

Conversely, in autumn, the amount of open water in the Beaufort and eastern Chukchi Seas appeared to be very influential in affecting the temperature at Utqia?vik and the subsequent timing of the onset of snowpack. The extent of open water in the region during autumn has increased significantly in the past several decades, a signal other studies have linked to Arctic amplification.

The rapid expansion of the North Slope’s snow-free season has had consequences for water resources, wildlife behavior, the plant growing season and more, the research team reported in the new paper. For example, on Cooper Island near Utqia?vik, where a colony of black guillemots has been monitored since 1975, researchers found that the timing of the seabirds’ egg laying correlates with Utqia?vik’s snowmelt, so earlier melt means earlier egg laying. The timing of snowmelt also influenced the timing of peak discharge from the North Slope river system and the start of the vegetative growing season, according to the researchers.

“It’s remarkable how rapidly things are changing in the Arctic and how the longer snow-free season affects so many other patterns–the guillemots, vegetation growth, and fluxes of gases from the tundra,” said Diane Stanitski, co-author of the paper and a scientist at the NOAA Earth System Research Laboratory in Boulder, Colorado.

This spring’s snowmelt date at Utqia?vik was late, on June 18, said lead author Cox. This late melt didn’t make it into the paper, because analyses were done by then, but the atmospheric conditions that led to the later melt were consistent with the findings in the paper. Such variability underscores the need for continued monitoring of snow cover, Cox said.

Long-term datasets from the region help scientists understand the reasons behind long-term changes and predict what the region will face in the future. “This study takes an integrated approach that addresses the need to advance Arctic environmental research at the system level, a challenge that has been recognized by the broad scientific community as necessary to improve predictions of future change,” said Cox.