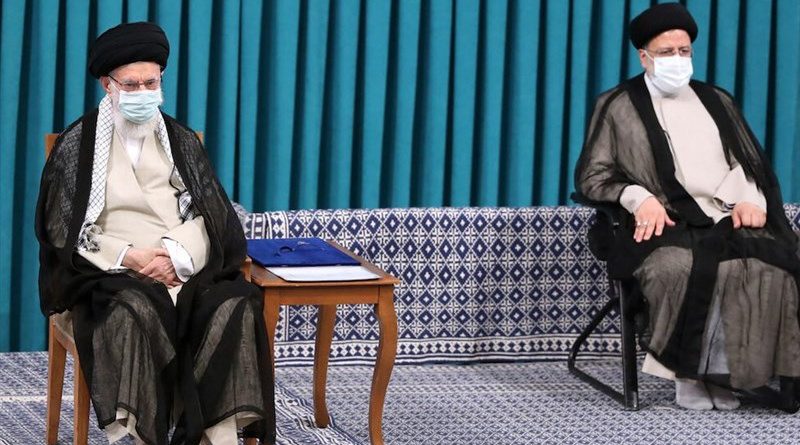 (RFE/RL) — Ultraconservative Ebrahim Raisi was credentialed by Iran’s supreme leader on August 3 in a two-step inauguration process that will fully usher in the controversial former prosecutor’s hard-line administration over the next two days.

Raisi takes over from the relative moderate Hassan Rohani vowing to take measures to rid the Islamic republic of “tyrannical” U.S. sanctions.

“Following the people’s choice, I task the wise, indefatigable, experienced and popular Hojatoleslam Ebrahim Raisi as president of the Islamic Republic of Iran,” Khamenei wrote in a decree read out by his chief of staff.

Raisi is due to be sworn in before parliament on August 5 and will then submit his proposed cabinet.

Among the items high on his agenda will be talks aimed at reviving the nuclear deal from which the United States withdrew unilaterally in 2018.

Rohani’s landmark achievement was the 2015 nuclear deal between Iran and six world powers that is the focus of international negotiations to revive it.

U.S. sanctions were reimposed after then-President Donald Trump withdrew from the deal in 2018, further hurting Iran’s economy. Tackling the country’s economic woes is expected to be Raisi’s top challenge.

In his address after the inauguration, Raisi said his government will take steps to lift the “tyrannical” sanctions imposed by the United States.

Raisi said after his election victory that he backs talks to revive the deal, which lifted most sanctions on Tehran in exchange for commitments to limit and monitor its nuclear program

Raisi also faces an immediate crisis as the United States, Israel, and Britain have blamed Tehran for a deadly attack on an Israeli-managed tanker off the coast of Oman last week. Tehran denies responsibility.

Raisi’s presidency will consolidate power in the hands of conservatives following their 2020 legislative election victory, which followed the disqualification of thousands of reformist or moderate candidates.