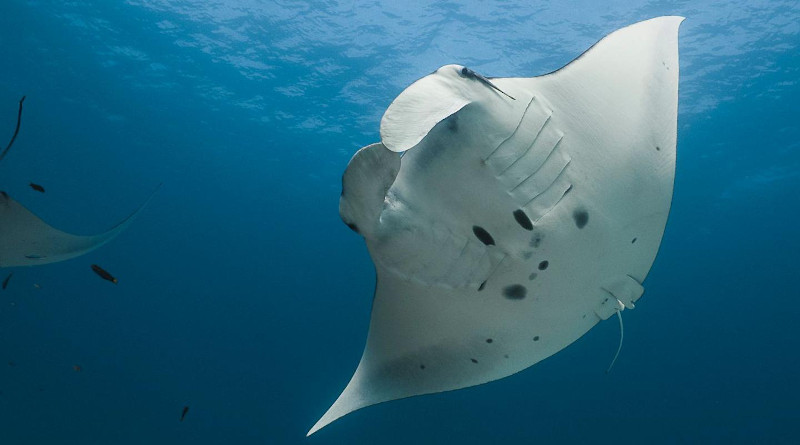 Marine animals are notoriously difficult to track, creating big gaps in how scientists understand their behavior and migration patterns – key insights for helping conserve important habitats. Researchers in Australia, using satellite tags and a decades-old satellite photographic database, published a paper in Frontiers in Marine Science that suggests a migratory species like the reef manta ray is somewhat of a homebody.

The study found that a population of Mobula alfredi, one of the largest species of rays in the world, lives and travels long term between two UNESCO World Heritage areas along the middle of Australia’s west coast. Nearly 10 percent of the more-than-1,100 reef manta rays identified by photographs had been visiting Ningaloo Marine Park for more than a decade, with the longest one spanning about 15 years.

“This is a great discovery for the reef manta rays on this coastline, because these protected areas provide the legislative framework needed to underpin further management action,” said Amelia J. Armstrong, lead author of the new paper and a PhD student in biomedical sciences at the University of Queensland.

Reef manta rays are a long-lived species with a relatively slow reproductive life cycle, and they are listed as “vulnerable” on the IUCN Red List of Threatened Species. International trade in manta ray body parts, particularly gill plates used in traditional Chinese medicine, is driving population decline, according to Armstrong.

“Unfortunately for manta rays, a slow growth rate and few offspring means that populations can take a long time to recover from disturbance,” she said.

The researchers tagged 20 reef manta rays in 2016 and two more in 2019 in and around Ningaloo Reef, one of the longest fringing reefs in the world where deep-ocean upwellings and local currents create a hotspot of feeding activity. The satellite tags can’t use GPS while the animals are underwater, so the devices collect depth, temperature, and light-level readings. Models then extrapolate location based on that information.

The oldest photograph in the photo database used in the study dates back to the early 2000s. From birth, reef manta rays sport the same unique spot patterns, which scientists use to recognize individuals over time. The photographs, including imagery collected from photos by local tourism operators and citizen scientists through social media, helped the Australian team identify more than 1,100 individual animals from about 5,000 sightings.

“Satellite tags allow us a short peek into the secret lives of these animals to understand where else they frequent outside of key tourism locations, while photographic identification helps us track visitation over longer periods,” Armstrong explained.

The study notes that understanding the key areas where migratory species like the reef manta ray like to congregate is crucial for their future conservation. While the Ningaloo and Shark Bay World Heritage Areas are protected, nearby coastal development and tourism create their own kind of population pressures, including animals injured by boat propellers and fishing gear.

“Further investigation into population size and trends is an urgent research priority to ensure this manta ray population is robust and resilient in the face of future change,” Armstrong said.