U.S. oil production, including crude oil and lease condensate, has grown steadily since 2008, a change from the two decades of declines before 2008. This growth has been driven mainly by increased production from various tight (very low permeability) formations. (Permeability measures how well liquids and gases can flow through open spaces in rocks.) Horizontal drilling combined with hydraulic fracturing have allowed exploration and production (E&P) companies to access commercial volumes of oil from rock formations that are less permeable than those found in conventional formations. The U.S. Energy Information Administration (EIA) expects that development of tight formations will lead to continuing significant increases in U.S. oil production in the coming years.

Three key basins with tight formations have been the largest contributors to U.S. oil production growth: the Permian Basin in West Texas and southeastern New Mexico; the Western Gulf Basin in southern Texas, which includes the Eagle Ford shale; and the Williston Basin, which extends over parts of North Dakota, South Dakota, and Montana and which includes the Bakken formation (Figure 1).

Since January 2009, North Dakota’s crude oil production has more than tripled from an average of less than 190,000 barrels per day (bbl/d) to nearly 675,000 bbl/d in July 2012, based on North Dakota Department of Mineral Resources statistics (Figure 2). This growth makes North Dakota the second largest oil producing state, behind Texas and ahead of both Alaska and California. The Bakken tight oil formation has accounted for nearly all of the new production in North Dakota. EIA forecasts total Williston Basin production, including North Dakota and Montana, will approach 1.1 million bbl/d by January 2014.

Texas oil production has increased about 770,000 bbl/d since January 2009, and in June 2012 averaged 1.9 million bbl/d. Texas has seen the largest volumetric increase of any state. The Permian Basin, which was already producing significant quantities of conventional oil, has experienced increases in oil production from both conventional and shale plays. EIA forecasts Western Gulf Basin production to rise to almost 930,000 bbl/d and Permian Basin production to reach 1.55 million bbl/d by January 2014. 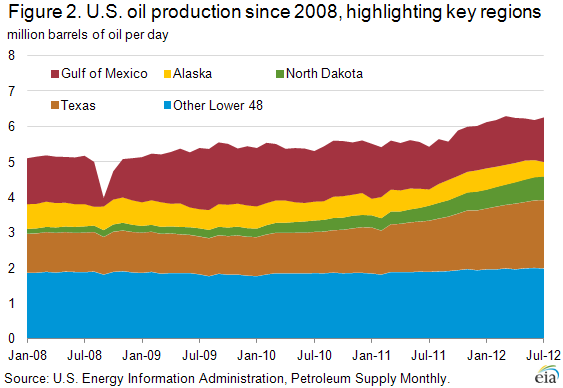 The shift of the U.S. drilling rig fleet away from dry natural gas to oil and wet natural gas suggests that the production of oil and other liquids will continue to climb. E&P companies are making significant capital investments in horizontal drilling rigs and deploying them to tight oil plays. Many existing rigs with horizontal-drilling capabilities are being redeployed from plays rich in dry natural gas to those that can produce crude oil and other liquids that have a significantly greater value under current market conditions. The total number of rigs drilling for oil increased 76 percent from an average of 801 in February 2011 to an average of 1,409 in September 2012, based on detailed weekly active rig count data provided by Baker Hughes Incorporated. The number of rigs drilling horizontal wells has grown even more rapidly, increasing from 362 to 823, over the same period. September 2012 data show that a weekly average of 58 percent of the entire U.S. onshore rig fleet was drilling horizontal wells, compared to 45 percent in February 2011. Because horizontal drilling is often associated with tight formations, it is apparent that an increasing number of producers are targeting tight geology.

The geographical distribution of the rig fleet also suggests that E&P companies are directing more resources to drilling for tight oil. In February 2011, North Dakota and Texas already were leading all other states in average number of rigs targeting oil, averaging 150 and 390 per week, respectively. The average weekly oil rig count increased to 182 in North Dakota and 692 in Texas in September 2012. These two states, which produce the majority of the oil from the three key basins containing tight formations with liquids, account for more than half the net increase in rigs over this time period. Based on this information, a large proportion of new and existing drilling rigs are expected to be allocated towards liquids in North Dakota and Texas, and many of these rigs likely will be drilling horizontal wells.