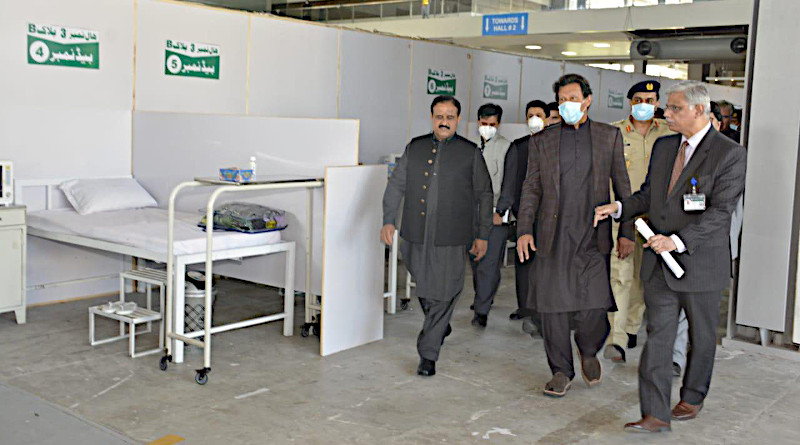 As the world is brought down to a screeching halt in the wake of the COVID-19 pandemic, Pakistan has also followed suit by closing down institutions, banning public gathering and limiting market activity to groceries and medical supplies only. The government finds itself caught between a rock and a hard place. The pandemic asks for social distancing a measure of which is a lockdown. However, Pakistan’s economic turmoil dictates otherwise. A lockdown will render millions jobless and on the brink of starvation. Generally, in such situations, a country relies on the congruence between the government and the civil society. But it’s a different story when it comes to Pakistan. Here, the government and the society can be as uniform as a column of soldiers and as apart as day and night in their perceptions and approaches. The current pandemic crisis has brought this aspect of our society into the limelight once again..

Talking of the economics of the COVID pandemic, two extreme approaches can be seen. While some are using the crisis to their advantage and selling in-demand products like sanitizers and masks at the price of gold, a majority is looking after the most vulnerable sections despite their meager resources. Pakistan is a remarkable country. A testament to which is that the World Giving Index ranked Pakistan as the 91st most generous nation 2019, ahead of economic giants like Brazil, India, Japan and China.

Such a divide is evident when it comes to the decision about the potential lockdown in the country. One group of people is advocating the federal decision to partially lockdown the country in the purview of the current trajectory for corona spread. They are also of the opinion that as more than 40% of the population are living below the poverty line therefore they will starve to death. Opting for partial lockdown prohibits gatherings but still allow for restricted movement of people to get their essential items. On the contrary, the other group of people including provincial authorities supports the complete lockdown considering it the only way to save people’s lives. Although the former group recognizes the benefit of complete shutdown, it has also to consider the lack of resources to alleviate the plight of the poor during such lockdowns.

As far as the opinions for the spread of the coronavirus in the country is concerned, the two religious sects are held responsible in this regard. One group of the society is blaming the “Tablighi congregation in Lahore” that brought together tens of thousands of Islamic preachers from some 80 countries. They believe that this Tablighi gathering has emerged as a potential infection cluster of Coronavirus in Pakistan. The other group of people is accusing Shia pilgrims visiting the religious sites in Iran (one of the countries hardest-hit by the disease) as the potential source of spreading the Coronavirus. These infected pilgrims were allowed to enter at Taftan border in Baluchistan without being properly quarantined.

Similarly, the price of unpacked milk, as well as yogurt, has dropped in those cities of the country which are locked down due to the coronavirus. Now the general population came up with two different perceptions for this decrease in prices. One group of people termed this reduced price to be avoluntary gesture by the dairy farmers to help the people in this critical situation. While the other group of people including the retailers and the customers say that the prices are decreased so that milk is not wasted as demand is low under the current lockdown restrictions. They said prices are likely to be raised after the situation returns to normal. Similarly, as far as taking pictures/ making videos while distributing ration among poor and highlighting these acts of donations on social media is concerned the same society has two different views. One group of people says that charity must be given secretly so that it may not cause any humiliation or embarrassment to the poor person. However, some people say that giving charity publicly as long as the giver knows his intentions is not to show off or be boastful sets a good example to the community. It encourages others to follow in the giver’s footsteps and give charity, too.

These varying views are two sides of the same coin when it comes to dealing with the current situation, but one must help people see positivity. This is a disease and we need to fight it, yes! However, we have to do it fairly and compassionately. There is a dire need to fight against this contagious pandemic without manipulating the situation, stocking the essential commodities for short term personal gains and avoiding to blame others. People being inclined towards their self-righteous approach try to impose their extreme ideas and are always in a hurry to pass judgment and decisions about the actions of others. Positive criticism is good but at times like these, it’s better not to create differences. For now, we can afford to put aside our differences to fight out later. In times of constant negative messaging, one needs an antidote to maintain his/her positive attitude while marching forward with determination and hope. Be deliberate in activities that are positive, heartwarming, stress-reducing and laughter-inducing!

It was highly probable.  Given the howls of concern that social media platforms such as Twitter and Facebook nurse and