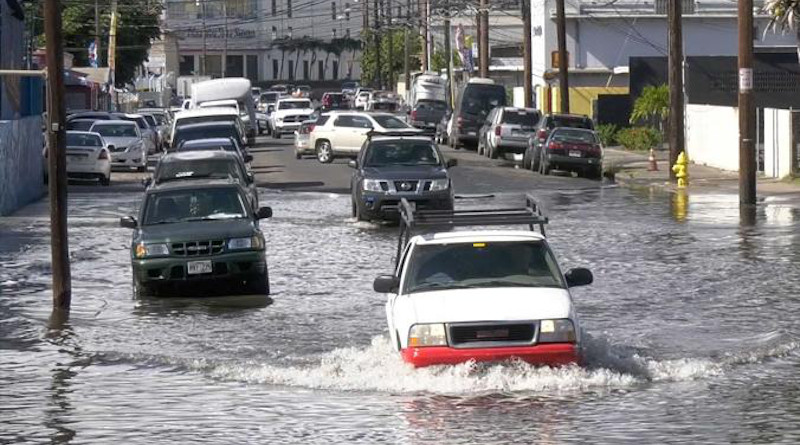 Today and as sea level continues to rise in the future, extreme high tide events cause Honolulu, Hawai’i’s primary urban center to experience flooding not just from water washing directly over the shoreline, but also from groundwater inundation as the water table is pushed toward the surface, and reverse flow through the municipal drainage system.

In a study published in Scientific Reports, researchers at the University of Hawai’i at Mānoa School of Ocean and Earth Science and Technology, found in the next few decades, sea level rise will likely cause large and increasing percentages of land area to be impacted simultaneously by the three flood mechanisms.

“This is significant because many people think that sea level rise can be mitigated by seawalls,” said Shellie Habel, lead author of the study and coastal geologist and extension agent with the University of Hawai’i Sea Grant College Program and UH Coastal Geology Group. “But a seawall will not stop groundwater inundation. Our results highlight the need to readjust our thinking regarding the flooding that accompanies sea level rise. We want to be sure to implement flood management strategies that will be effective at mitigating flooding.”

This requires that all types of flooding be thoroughly assessed.

Habel and co-authors developed a method that identified the various flood types and their extent. Flood maps were produced by simulating flood locations and depths generated by each of the three mechanisms and by overlapping the simulations to identify areas vulnerable to combined flooding over the coming decades.

Colleagues at the UH Sea Level Center then developed a statistical model that considers predicted tide and projected magnitudes of local sea level rise to establish the frequency with which flooding is likely to occur in given locations.

With these flood simulations, the research team assessed critical infrastructure that is likely to fail and cause direct impacts, such as dangerous or impassable roadways, storm drainage inlets likely to fail or act as pathways for additional flooding, and non-functional or flooded cesspools.

The impacts were found to be widespread among Honolulu’s heavily densified primary urban center.

Planning for the future

“Because each type of flooding infiltrates through unique pathways, they will require unique engineering strategies to manage,” said Habel. “The design of flood management strategies required to mitigate these impacts necessitate site-specific consideration of each mechanism to avoid being ineffective.”

In partnership with the Honolulu Board of Water Supply, the University of Hawai’i, Hawai’i Sea Grant, and other stakeholders, the authors plan to develop a real-time coastal groundwater monitoring network. Data collected through the monitoring network will help improve the capabilities of the modeling such as the ability to incorporate the effects of extreme rainfall. The network would also provide information that could inform the development of short, mid and long-term flood management strategies.