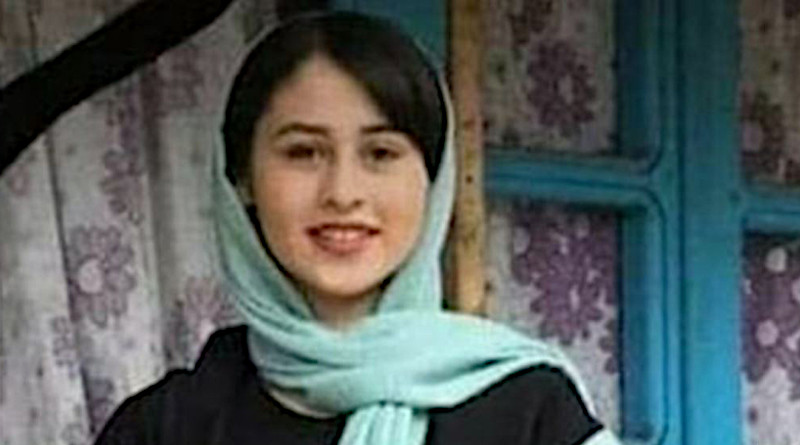 (RFE/RL) — Romina was only 14-years-old when she was reportedly beheaded by her father in a horrific case of a so-called “honor” killing that has shocked Iran.

Reza Ashrafi, her dad, reportedly failed to convince Romina’s mother to force their daughter to commit suicide, so he decapitated her with a sickle as she slept at the family home.

The police had detained Romina and her boyfriend two days earlier after a five-day hunt and sent her back to her family even though she expressed fears for her life in citing her father’s bad temperament.

Reza Ashrafi confessed to the gruesome killing of his daughter while still holding the bloody tool, Iranian media reported.

The May 21 death of Romina in the northern Gilan Province put a spotlight on the all-too-common practice in Iran of honor killings, which are both underreported and often hushed up by officials.

Under current Islamic laws in Iran, Romina’s father faces a prison sentence of up to 10 years if convicted. He is exempt from the “retribution” law — meaning the death penalty — since according to Islamic Penal Code he was Romina’s guardian.

Iranian media have reported that, before beheading his daughter, Ashrafi consulted a lawyer to find out what punishment he would face.

Romina’s aunt said in an interview that Ashrafi, 37, claimed that through his act he had proven he’s an honorable man. She added that Ashrafi — who is in detention — had been pressured by his brothers to kill Romina.

The shocking murder in the town of Hovigh led to nationwide outrage, but is just the latest case of such killings in Iran, which activists blame on patriarchal culture and traditions, discrimination, as well as laws that fail to protect women against violence and allow girls as young as 13 to be married.

“Women are [seen] as the property of men,” Paris-based sociologist and author Chahla Chafiq said in a recent interview with the BBC.

There are no official statistics kept in Iran about honor killings, but according to academic articles and university-thesis estimates cited by the daily Ebtekar, every year between 375 and 450 Iranian women are killed by their male relatives — including their husbands, fathers, and brothers — in the name of preserving the family’s “honor.”

Women have been killed for losing their virginity, bearing a child outside of marriage, infidelity, a request for a divorce, or even over unfounded rumors of being engaged in activity that would taint their family’s status.

A police official said in 2014 that about 20 percent of all murders in Iran had been honor killings.

A study published last year about the practice in the southern Khuzestan Province said that many of these murders go either unreported or they’re being reported as “disappearance, suicide, or suspicious deaths.”

According to the study, honor killings are more prevalent in provinces with tribal traditions, including in Sistan-Baluchistan, Khuzestan, Kurdistan, and Ilam.

The Iranian media has reported on a number of such cases in recent years but none of them have grabbed as much attention as Romina’s, which made national headlines and prompted a call by President Hassan Rohani for the speedy adoption of legislation to more harshly prosecute honor killings.

Some of the more notorious cases in Iran in recent years include a woman identified as “Z” who was beaten to death by her brother while her uncle watched. The brother repeatedly banged his sister’s head against a wall until she died.

The woman had been reportedly harassed by a neighbor and her family worried its “honor” had been damaged.

Another young woman was shot dead with a hunting gun by her father on a street in Khoy, in the West Azerbaijan Province, due to rumors she had dishonored the family.

The media also reported on the horrific death of a young woman named Golbahar in the southwestern province of Chaharmahal-Bakhtiari. Golbahar was reportedly set on fire by male relatives for bearing the child of a young neighbor. Her child was reportedly poisoned to death by the men.

Journalist and women’s rights activist Zila Baniyaghoob, who covered Golbahar’s case, wrote that to escape prosecution the family claimed Golbahar had committed self-immolation and that her child had starved to death.

“How many Golbahars and Rominas have been killed in their paternal houses and how many more will be killed?” Baniyaghoob tweeted after Romina’s killing.

Shahindokht Molavderi, former Iranian vice president of women’s affairs who’s been outspoken on women’s rights, suggested that without the passing of relevant legislation and the raising of awareness, the cycle of violence against women is likely to continue.

“Romina is neither the first nor will she be the last victim of honor killings,” Molaverdi said on Twitter.

“As long as the law, judicial procedure, and the culture that dominates local and global communities does not offer enough deterrence, they will serve this crime against humanity,” she said while posting Romina’s funeral ceremony invitation, on which the teenager was described as “the dear daughter” of Reza Ashrafi.

Filmmaker Kianush Ayari — whose movie Paternal House about an honor killing in Iran that reverberates through three generations but was banned last year over scenes deemed too violent — reacted to Romina’s killing by calling for his film to finally be screened “for the sake of the people.”

“If there hadn’t been an irrelevant opposition and they had allowed [my film] to be screened widely, maybe [Romina]’s father would have seen it and [it would have made him] think,” Ayari said.

The Tehran chief prosecutor banned Ayari’s film after claiming it promoted “violence against women” and questions “pure Iranian-Islamic traditions” while offering a “false image” of the Iranian family.