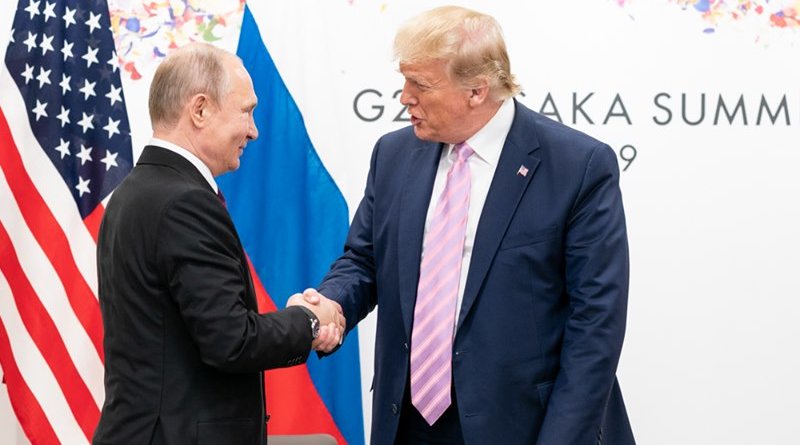 The G-20 Summit in Osaka on 28-29 June 2019 marked another step towards the gradual weakening of the West’s diplomatic isolation of Russia.

The focus of President Vladimir Putin’s attention at the recent G-20 Summit in Osaka was more on his meetings with major Western leaders like President Donald Trump, Prime Minister Theresa May, President Emmanuel Macron and Chancellor Angela Merkel than on the issues surrounding the G-20 Summit.

It was, however, expected that his meetings with these Western leaders, in particular with President Trump, did not lead to any breakthrough on the issues that have divided the West and Russia since the Crimean and Ukrainian crises of 2014.

Why the Lack of Headway

There are at least three reasons why Putin did not achieve any significant movement on these issues.

Firstly, there was no fixed agenda for his meeting with President Trump. However, that was not an important consideration to either President Putin or his Western interlocutors. The objective of both sides was to keep the dialogue and communications going at the highest levels of government.

Secondly, his meeting with President Trump was confirmed only two days before when his foreign affairs adviser, Yuri Ushakov, briefed reporters in Moscow on the event. This made it clear that their planned meeting was not meant to look at any compromise solutions to the well-known issues that divide Russia from the US and the West (Syria, the Ukraine, and for the US, Venezuela, Iran, allegations of Russian interference in the US Presidential elections).

Finally, the G-20 Summit would not have been an acceptable venue to try to resolve the issues between Russia and the US/West.

Nevertheless, the fact that President Putin met President Trump at all, in the face of massive domestic criticism of President Trump after their last meeting in Helsinki in July 2018, was a foreign policy achievement for the Russian leader.

Both presidents agreed to strengthen their economic relationship. Noteworthy though is that despite US sanctions, in 2018, trade turnover between the two countries amounted to around US$25 billion, marking a 7.9 per cent increase against the previous year, according to the Russian Customs Service.

More importantly, both sides would begin talks on arms control, in the light of the New Start Treaty’s expiration in 2021 (it was concluded in 2010 to reduce the number of strategic nuclear missile launchers).

President Putin invited President Trump to attend the 75th anniversary of the end of WW II in Moscow in 2020. If President Trump does attend it, it would be a significant symbolic step towards improving the state of bilateral relations (for Russia, this celebration on 9 May is not merely symbolic but is filled with much patriotic pride, given the brutal war between Nazi Germany and the then USSR).

Unlike his meetings with Presidents Trump and Macron, and Chancellor Merkel, Putin’s meeting with Prime Minister May was marked by her stern-looking face before the cameras. PM May was reported to have conveyed in strong terms, the United Kingdom’s feelings about Russia’s alleged involvement in the poisoning in 2018 of Sergei Skripal, a former Russian spy who lived in the UK.

It is telling that the British prime minister, considered one of the European Union’s hardliners towards Russia, would even have met President Putin, even if she is on the way out of office.

Nevertheless, whether and when a thaw in Russo-Western relations would lead to a lifting of Western sanctions, remains an open question.

Why the Shifting Situation

For Europe and the West in general, the close Russo-Chinese relationship must have become a factor in their consideration not to further alienate or isolate Russia. With Russia’s huge natural wealth and military technology, as well as growing market, it cannot be in the interest of the West to allow China to become more important to Russia than it already has.

A clear indication of Europe’s slowing changing attitude towards Russia can be seen in the 25 June 2019 vote by the Parliamentary Assembly of the Council of Europe to allow Russian representatives to return to the body; Russia was stripped of its voting rights in 2014.

A majority of 118 votes in favour of Russia’s return to the body, with 62 against and 10 abstentions, made it clear that there is no unified European attitude towards Russia. It is noteworthy that Germany and France, two of Europe’s most powerful countries, supported the move.

The Economics of Geopolitics

Economics also play a key role. The EU must also be concerned about the negative impact of its sanctions on the economies of its member states. During his Annual Question- and-Answer Session with his people held on 20 June 2019, President Putin claimed that since 2014, Russia had lost about US$50 billion as a result of the sanctions, while the EU had lost US$240 billion, without going into details.

However, this figure contradicts that of a European country expert on Russia. According to an article dated 20 February 2019 published by the Vienna Institute for International Economic Studies, the EU’s cumulative export loss to Russia between 2014 and 2018 is estimated at 30 billion euros.

Whether the loss to the EU is US$240 billion or 30 billion euros, the fact is that Europe has also been negatively affected by its sanctions. This cannot be disregarded by its politicians, given the economic difficulties of many European countries.

For the US which has a much lower economic and trade profile with Russia, the key is President Trump’s openly favourable attitude towards his Russian counterpart. His meeting with President Putin is in line with his consistent assertion that the US must “get along” with Russia.

Moreover, with the Mueller Report behind him, President Trump obviously feels less constrained in dealing with his Russian counterpart directly. Nevertheless, President Trump must overcome resistance from legislators, the media and the bureaucracy in his efforts to improve and strengthen relations with Russia.

An improvement in Russo-Western relations would ease ASEAN’s efforts to increase trade and investment flows from all parts of the world, including Russia, without having to consider the effect European or US sanctions might have on these efforts.

This would also inject more predictability and stability into ASEAN’s relations with its Western and Russian partners.

*Chris Cheang is a Senior Fellow with the S. Rajaratnam School of International Studies (RSIS), Nanyang Technological University (NTU), Singapore. He worked in the Singapore Embassy in Moscow between 1994 and 2013.