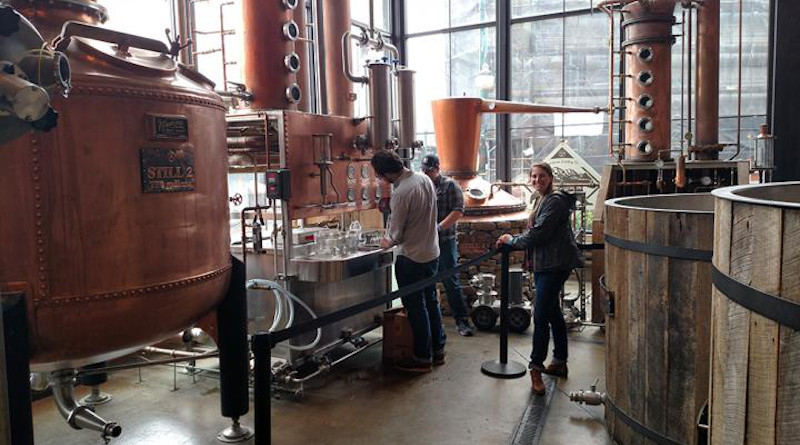 More than a century has passed since the last scientific analyses of the famed “Lincoln County [Tennessee] process” was published, but the secrets of the famous Tennessee whiskey flavor are starting to unravel at the University of Tennessee Institute of Agriculture. The latest research promises advancements in the field of flavor science as well as marketing.

Conducted John P. Munafo, Jr., assistant professor of flavor science and natural products, and his graduate student, Trenton Kerley, the study “Changes in Tennessee Whiskey Odorants by the Lincoln County Process” was recently published in the Journal of Agricultural and Food Chemistry (JAFC).

The study incorporated a combination of advanced flavor chemistry techniques to probe the changes in flavor chemistry occurring during charcoal filtration. This type of filtration is a common step in the production of distilled beverages, including vodka and rum, but it’s a required step for a product to be labeled “Tennessee whiskey.” The step is called the Lincoln County Process (LCP), after the locale of the original Jack Daniel’s distillery. It is also referred to as “charcoal mellowing.”

The LCP step is performed by passing the fresh whiskey distillate through a bed of charcoal, usually derived from burnt sugar maple, prior to barrel-aging the product. Although no scientific studies have proved such a claim, it is believed that the LCP imparts a “smoother” flavor to Tennessee whiskey. In addition, by law for the distinction of having “Tennessee whiskey” on the label, the liquor must be produced in the state of Tennessee from at least 51% corn after having been aged in Tennessee for at least 2 years in unused charred oak barrels.

The actual LCP differs from distiller to distiller, and, as the details are generally held as a trade secret, the process has been historically shrouded in mystery. There are no regulations as to how the process is performed, only that the step is required. In other words, all a manufacturer needs to do is pass the distillate over charcoal (an undefined amount–possibly even just one piece). Thus, depending on how it’s conducted, the LCP step may not impact the whisky flavor at all. On the other hand, even small adjustments to the LCP can modify the flavor profile of the whiskey positively or negatively, potentially causing any number of surprises.

Munafo and Kerley describe how distillers adjust parameters empirically throughout the whiskey production process, then rely on professional tasters to sample products, blending subtly unique batches to achieve their target flavor. Munafo says, “By gaining a fundamental understanding of the changes in flavor chemistry occurring during whiskey production, our team could advise distillers about exactly what changes are needed to make their process produce their desired flavor goals. We want to give distillers levers to pull, so they are not randomly or blindly attempting to get the precise flavor they want.”

Samples used in the study were provided by the Sugarlands Distilling Company (SDC), in Gatlinburg, Tennessee, producers of the Roaming Man Whiskey. SDC invited the UTIA researchers to visit their distillery and collect in-process samples. Munafo says SDC prioritizes transparency around their craft and takes pride in sharing the research, discovery and distillation process of how their whiskey is made and what makes Tennessee whiskey unique.

Olfactory evaluations–the good ole smell test–revealed that the LCP treatment generally decreased malty, rancid, fatty and roasty aromas in the whiskey distillates. As for the odorants (i.e., molecules responsible for odor), 49 were identified in the distillate samples using an analytical technique called gas chromatography-olfactometry (GC-O). Nine of these odorants have never been reported in the scientific whiskey literature.

One of the newly found whiskey odorants, called DMPF, was originally discovered in cocoa. It is described as having a unique anise or citrus-like smell. Another of the newly discovered whiskey odorants (called MND) is described as having a pleasant dried hay-like aroma. Both odorants have remarkably low odor thresholds in the parts-per-trillion range, meaning that the smells can be detected at very low levels by people but are difficult to detect with scientific instrumentation.

The only previous investigation into how charcoal treatment affects whiskey was published in 1908 by William Dudley in the Journal of the American Chemical Society. The new study revealed fresh knowledge for optimizing Tennessee whiskey production. Thirty-one whiskey odorants were measured via a technique called stable isotope dilution assay (SIDA), all showing a decrease in concentration as a result of LCP treatment, albeit to different degrees. That is to say, while the LCP appears to be selective in removing certain odorants, the process didn’t increase or add any odorants to the distillate. This new knowledge can be used to optimize Tennessee whiskey production. For instance, the process can be optimized for the removal of undesirable aromas, while maintaining higher levels of desirable aromas, thus “tailoring” the flavor profile of the finished whiskey.

“We want to provide the analytical tools needed to help enable distillers to have more control of their processes and make more consistent and flavorful whiskey, says Dr. Munafo. “We want to help them to take out some of the guesswork involved in whiskey production.”

Additional studies are now underway at the UT Department of Food Science to characterize both the flavor chemistry of different types of whiskey and their production processes. The ultimate aim of the whiskey flavor chemistry program is to aid whiskey manufacturers in producing a consistent product with the exact flavor profile that they desire. Even with the aid of science Munafo says, “Whiskey making will ‘still’ remain an impressive art form.” Pun intended.