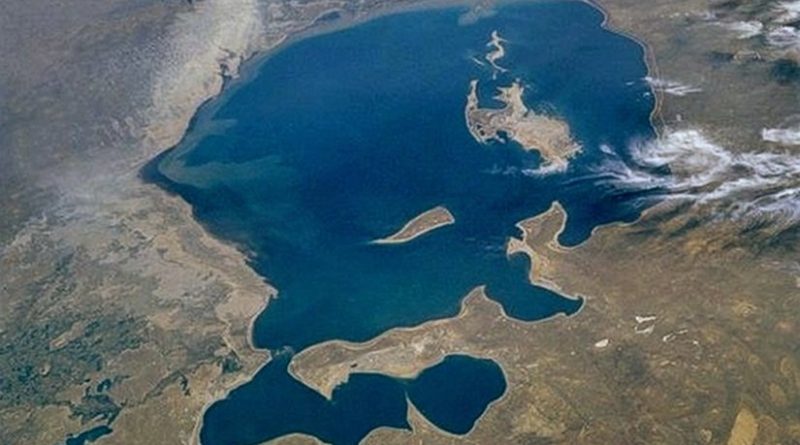 A consortium of investors has begun drilling an exploratory well from atop the drilling rig “Meros” in the Aral Sea.

The new well, named Meros-1Ex, was seen in 3D-seismic surveys, according to “LUKOIL Overseas”, the operator of the foreign upstream-projects of “LUKOIL”.

The depth of the Meros-1Ex well has been placed at 3,280 meters.

It was earlier reported that the international consortium of Uzbekneftegaz, LUKOIL, Petronas, Korean KNOC and Chinese CNPC was created in 2005, each with 20-per cent shares, to carry out the Aral project. The PSA on Aral block was signed in 2006 and consists of two parts: exploration work and further development of discovered hydrocarbon reserves for a period of 35 years. The start date of the projects was Jan.31, 2007.

Petronas and KNOC withdrew from the consortium in May 2011 and September 2013, respectively. Currently, Uzbekneftegaz holds 33.4 percent of the consortium, while the shares of CNPC and LUKOIL Overseas each total 33 percent.

The consortium completed the program for the geological exploration work, totaling 2,941 linear kilometers of 2D seismic surveys, by drilling two exploratory wells in 2011.

A new hydrocarbon field – West Aral – with preliminary estimated gas reserves of 11 billion cubic meters, was discovered, along with six prospective structures. Four of these structures were certified and prepared for deep drilling.

Currently, work on geological exploration in the contract area is entering its final stage. Fieldwork on 3D-seismic surveys, with estimated volumes of 780 square kilometers, was completed in March 2014.

One exploration and two dependent wells will be drilled at this stage of the geological exploration work, scheduled till mid-2016, taking into account the results of the exploratory drilling in the eastern part of the Aral Sea.

According to data from Uzbekneftegaz, there may be over 30 anomalies related to the oil and gas objects within the waters of the Aral Sea’s Uzbek area, covering 12,500 square meters.

Home » Uzbekistan To Explore For Hydrocarbons In Aral Sea