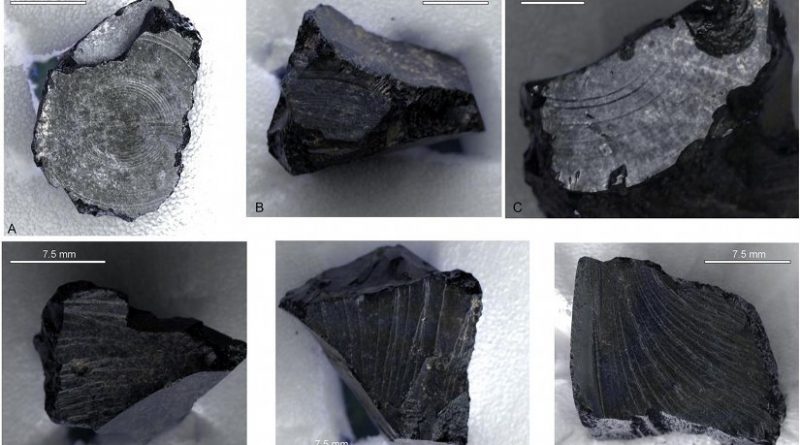 RTI images of surface morphology on fragments from 1939,1010.251. Upper images (A, B and C) show concentric rings suggestive of working or worked imprints; lower images show natural fracture surface on the same fragments (D and E) and on a reference specimen of bitumen (F). Credit: Burger et al (2016)

Middle Eastern Bitumen, a rare, tar-like material, is present in the seventh century ship buried at Sutton Hoo, according to a study published in the open-access journal PLOS ONE by Pauline Burger and colleagues from the British Museum, UK and the University of Aberdeen.

The seventh century ship found within a burial mound at Sutton Hoo, UK was first excavated in 1939 and is known for the spectacular treasure it contained including jewellery, silverware, coins, and ceremonial armor.

The site is thought to be an example of the European ship-burial rites of the time, and also includes a burial chamber where a corpse was likely laid. Fragments of black organic material found in this chamber were originally identified as locally-produced ‘Stockholm Tar’ and linked to repair and maintenance of the ship.

The authors of the present study re-evaluated these previously-identified samples, as well as other tar-like materials found at the site, using imaging techniques and isotopic analysis and found the samples had been originally misidentified.

By comparing the samples from Sutton Hoo to various reference materials, the researchers’ analysis revealed that the previously-identified ‘Stockholm Tar’ lumps actually displayed the molecular and isotopic characteristics of archaeological bitumen, and specifically bitumen from the Middle East rather than from a local British source. Archaeological finds of bitumen from this period in Britain are extremely rare and the authors state that this finding is the first material evidence for trading of Middle Eastern bitumen northwards into the British Isles.

While the original form and purpose of the bitumen could not be discerned from the remaining fragments, the authors suggest that it may have been included deliberately in the burial chamber, possibly the remaining components of ornamental objects adorning the grave, or perhaps included as a prestigious raw material.